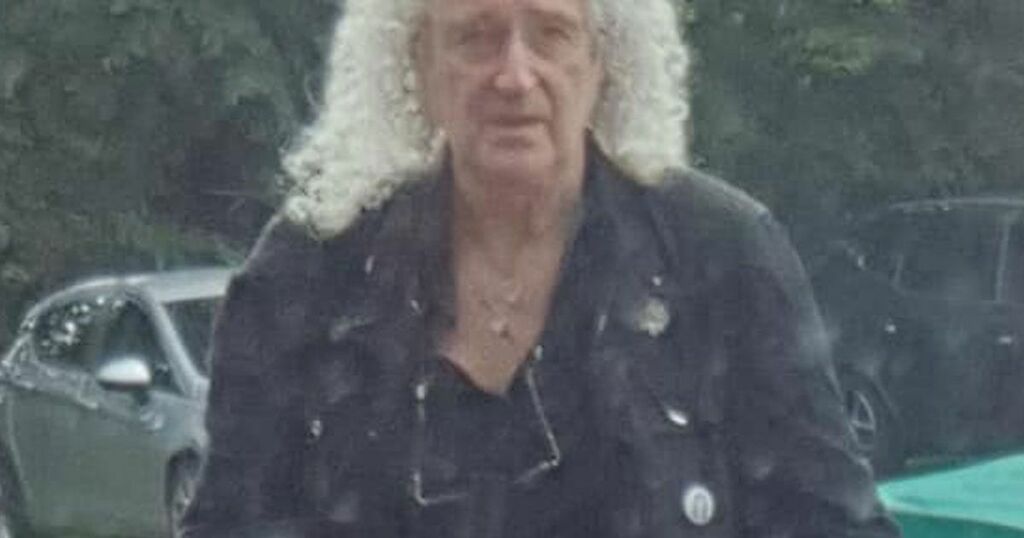 His band may have famously sung 'Don't Stop Me Now', but Queen star Brian May caused the good times at a cricket match in Cornwall to temporarily come to a halt over the weekend.

The legendary guitarist left players and spectators bowled over when he decided to land his helicopter next to the pitch of an ongoing game on Saturday.

The 74-year-old was in town to attend the wedding of bandmate Roger Taylor's daughter when he parked his chopper in the village of Mawnan Smith, near Falmouth, Cornwall.

Flying in with wife Anita Dobson, 72, the rocker's arrival caused the match between Falmouth 2nd XI and Helston 2nd XI at the Hine Downing Oval to be delayed for seven minutes as the couple vacated their private helicopter.

The wedding guests then travelled by car to the venue roughly 15 minutes away.

"The club knew it was coming, we do get one or two helicopters who land on the outfield from time to time.

"Everyone just stopped to watch this monster land in the middle of the game," the spokesman continued.

"It dropped him off then went off to refuel then came back again.

'It’s something you don’t see every day," they exclaimed.

"They went to the wedding then came back and flew off at about 10.15pm.

"It was quite a good game but we lost. Being the second team, there wasn’t a big crowd."

"Falmouth 2nds match v Helston interrupted this afternoon by a helicopter bringing, so I’m told, Brian May and his wife to Roger Taylor’s daughter’s wedding."

The Queen drummer's daughter Rory is a doctor who works in west London.

Last year, the 72-year-old voiced his concerns over his child and PPE, as the GP continued to see patients throughout the pandemic.

Speaking to The Sunday Times in May 2020, Rory admitted: "Whenever I speak to Dad on the phone now, the first thing he asks about is my PPE."

The drummer's daughter also confessed to the publication that lockdown had been 'difficult' for her and her rock star father, as the pair have a 'very close relationship and meet up regularly.'

Roger himself admitted that his medic child had been advising him on how to take care of himself as coronavirus swept the nation.

The Queen star said: "I’ve learnt that a doctor should not treat members of their own family, but Rory gives me tips of course."

"Whenever we speak, and we speak all the time these days, she tells me I need to take more vitamin D to strengthen my … whatever.

"And we often talk about the garden I have here at home in Cornwall."