Every layer of college football roster management appears to have additional steps added to it in recent years. Whether it’s retaining top talent in the program against the transfer portal or the NFL draft, or even bringing in talent in the first place.

Even recruiting the game’s most important position, quarterback, has become an elongated endeavor. Programs are recruiting commitments already on board because of the threat of other programs’ poaching. Ten FBS pledges at the position have backed off the initial commitment to date.

“This is gonna take some getting used to,” a college coach said over the weekend.

Gone are the days of early commitments and minimal drama among the future passers of college football. The cycle and movement between the best available are pushing deeper into the year. Prep talents, seemingly more aware of the entire landscape and market at the position relative to recruiting class, are operating from a business standpoint and weighing all options as they come.

It has created movement at the position later than the industry has come to expect outside of coaching changes at the end of a given season. Reporters used to travel to the Elite 11 finals and watch nearly every QB work with their college destination already well known. If anything, content plans focused more on evaluations and who a passer may be recruiting to join him more so than anything about any changes to his own recruitment.

It was not the case at the end of June for the 2022 Elite 11 finals. Going into the event, there were strong candidates among the uncommitted, including No. 1 recruit Dante Moore (eventually committed to Oregon), dual-threat Avery Johnson (Kansas State) and fast-riser Brock Glenn (Ohio State). While each of those decisions since were needle movers, there has been almost more attention on the QBs many thought were done with the process—but clearly weren’t.

As Elite 11 director Brian Stumpf posted on social media last week, there has been considerable action in the flip game at quarterback, just among the 20 competitors. It serves as a great sample of the class at large, magnifying the overall talent (11 QBs made the SI99 rankings) as well as the new nature of movement to expect at the position.

In the six weeks since the event wrapped up, Marcus Stokes flipped from Penn State to Florida, and then Penn State flipped Jaxon Smolik from Tulane. Rickie Collins flipped from Purdue to the hometown LSU Tigers, and Chris Parson backed off a nearly one-year commitment to Florida State to reopen the process. On Friday, the Brentwood (Tenn.) Ravenwood quarterback made an SEC commitment to Mike Leach and the Mississippi State Bulldogs.

“I feel more comfortable with the situation I’m going to and I’m definitely excited to get a chance to play in Leach’s offense,” Parson says. “The people at Mississippi State were very important and the relationships I have with coaches and players there. MSU’s staff was recruiting me very hard, and they made it clear that I was a priority. The players at State also played a big part in my decision.

Naturally, the movement means many programs are still hunting for QB1 as their own 2022 football season begins. That can bring challenges in identifying new targets with limited timing because every party involved is busy trying to work to win games. Of course, it won’t stop the next batch of flip attempts as prospects, as Parson detailed, make a final decision with much more comfort from a knowledge standpoint.

Texas A&M, which missed on Moore, Austin Novosad, Jaden Rashada and others, hosted USC quarterback and SI99 top-10 recruit Malachi Nelson for an unofficial visit at the end of July. Going into that trip, at least one more source in SEC country hinted at Nelson potentially taking a look at their school despite a longstanding pledge to Lincoln Riley at both OU and now at USC.

Notre Dame has been on flip watch on their own end of late, too. It first went after Novosad, à la A&M and Ohio State, though he chose to stick with his original December commitment to the in-state Baylor Bears. Since, the Irish have offered Pitt commitment Kenny Minchey, No. 80 in the SI99 and a top-five finisher at the Elite 11 finals. There is some sense Minchey could stick with the reigning ACC champions, but there was early interest between the two parties, and communication could soon pick up.

Emory Williams, another Elite 11 finalist, has had programs in his ear despite a June commitment to Miami. Florida and Mississippi State were two in the mix before each program found its pledge in the 2023 cycle, and now even more programs are establishing contact with the Milton (Fla.) High School quarterback. Williams has recently added an SEC offer soon to be public, as programs contend he is viewed as the “second” quarterback to Rashada, a top-10 recruit.

Could Alabama's Eli Holstein be viewed similarly as the Crimson Tide, like Miami, holds pledges from two recruits at the position?

At this point, the season is likely to kick off with several marquee programs absent in the QB column in the class of 2023. From the national champs on the field to the recruiting champs of last cycle in Texas A&M, the position has been elusive throughout the cycle. Notre Dame, Michigan, Wisconsin, Auburn, Florida State and South Carolina are just some yet to fill that all-important quarterback gap to date.

The programs victimized in one of the marquee flips of course also remain on the hunt to replace a departed commitment. Do you reshuffle the deck and allow for a senior-season riser like a Jaxson Dart, who didn’t have a Power 5 offer until the 2020 season began, to play his way into a scholarship offer? Or is it automatically all about the transfer portal?

Some, like perhaps Georgia, may punt on the position when all is said and done, especially with the transfer portal so fluid. Another example of what to expect popped up Monday as USF named Gerry Bohanon its starting quarterback, pushing backup Timmy McClain to enter the portal. Similar battles will lead to additional portal entries, sometimes serving as a stopgap for programs whiffing on the high school recruiting trail at the position. 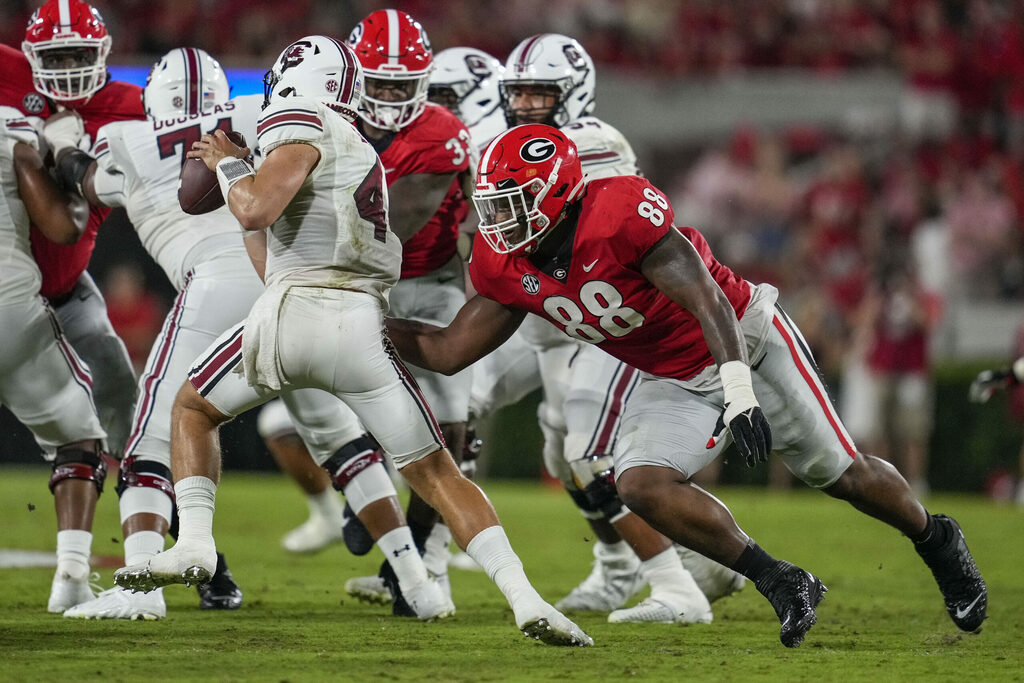 USA Today Sports Media Group
From analysis to the latest developments in health, read the most diverse news in one place.
Where does ESPN rank Ohio State coach Ryan Day in its four tiers of best college football coaches?

Where did ESPN's Adam Rittenberg slot Ryan Day in his four tiers of college football coach rankings, and do you…

Missouri vs Louisiana Tech game preview, prediction, and breakdown for the Week 1 game on Thursday, September 1

USA Today Sports Media Group
One place to find news on any topic, from hundreds of sites.
Why Myles Brennan’s stunning retirement doesn’t mean bettors should fade LSU this season