‘Quad’ Talks in Japan Open With Eyes on China and Ukraine

The leaders of Japan, India, Australia, and the United States — or the “Quad” grouping — pledged to work towards a free and open region, and focus on fighting climate change, at the start of a summit in Tokyo on Tuesday.

Formally the Quadrilateral Security Dialogue, the group was resurrected in 2017 amidst changing attitudes towards China’s growing influence in the region. A pivotal part of the U.S. focus on the Indo-Pacific region, the latest summit is also aimed at paving over differences on issues including Russia.

“This is about democracies versus autocracies, and we have to make sure we deliver,” U.S. President Joe Biden said as the summit began.

“Without walking together with countries in the region, the Quad cannot be successful,” he said, a reference to China’s efforts to build ties with Pacific nations including the Solomon Islands.

Pointing to the Russian invasion of Ukraine, the Japanese leader said also said that the Quad “cannot let the same thing happen in the Indo-Pacific region.”

Kishida also announced a plan to invest billions of dollars in infrastructure projects.

“In the infrastructure sector, we announce that we will aim to invest more than US$50 billion over the next five years to assist projects in the Indo-Pacific region,” he said after the summit in Tokyo.

Indian Prime Minister Narendra Modi said the group had gained a significant place on the world stage in a short span of time, saying it had “ensured peace, prosperity, and stability in the Indo-Pacific.”

U.S. to woo India over ‘commonalities’

India’s decision to break with the Western allies’ stand on Ukraine and the Russian invasion has been a source of frustration for the U.S., but experts say Biden will push Modi on the issue gently and privately.

“International law, human rights must always be defended regardless of where they’re violated in the world,” Biden said in his opening remarks at the summit.

India has abstained at three major UN General Assembly votes on the war in Russia — on two resolutions that held Russia either fully or primarily responsible for the conflict and on a motion to suspend it from the UN’s Human Rights Council. All the motions passed but India, which has deep historical ties to Russia rooted in no small part in Cold War politics, was the only Quad member to abstain on any of them.

A key challenge is weaning India off Russian-supplied military equipment and oil supplies. A day earlier, New Delhi said the U.S. was considering “investment support” of US$4 billion for India in addition to billions of dollars extended earlier. The statement came after the countries signed an agreement for healthcare, Covid-19 vaccine manufacturing, renewable energy, financial inclusion, and infrastructure.

However, the U.S. has sought to emphasize the countries’ shared views on China, which Washington views as a bigger long-term challenge than Russia.

Taiwan expected to be key topic

While Taiwan was not an official item on the Quad agenda for this summit, Biden’s decision to break with convention and volunteer U.S. military support for the self-governed island has pushed it to the limelight.

Speaking at a news conference in Tokyo a day earlier, Biden said the U.S. stands by its One China policy that sees Taiwan as a part of China, but Washington would intervene if Beijing was to use force against the island.

Japanese officials sought to downplay Biden’s comments on Taiwan, with Japan’s Deputy Chief Cabinet Secretary Seiji Kihara saying that “Japan and the United States have not made any policy shift on Taiwan.”

With close to 55,000 U.S. troops based in Japan, mainly in Okinawa, which is just 100 kilometers (60 miles) from Taiwan, Japan is a major stakeholder in the equation.

Biden will also meet Australia’s new Prime Minister Albanese, who was sworn on Monday. He flew to Tokyo immediately after for the summit. Both leaders also spoke on the phone after the center-left Labor Party leader defeated incumbent Prime Minister Scott Morrison, ending nine years of conservative rule in Australia.

Today I had the pleasure of meeting with PM Kishida @JPN_PMO, @POTU.S. and @narendramodi at the Quad Summit in Tokyo. We affirmed our shared commitment to the Quad, and to a free, open and resilient Indo-Pacific. I look forward to hosting Quad Leaders in Australia in 2023. pic.twitter.com/pQ97B1nufQ

U.S. President Biden welcomed Albanese to the summit, adding, “I don’t know how you’re doing it,” referring to the Australian premier rushing to Tokyo immediately after being sworn in on Monday.

At the summit, Albanese pledged more support for Pacific nations including aid to deepen “our defense and maritime cooperation.”

“The new Australian government’s priorities align with the Quad agenda, taking action on climate change, and building a stronger and more resilient Indo-Pacific region,” Albanese said at his first summit after the election.

India, the U.S., and 11 other countries also this week announced they would be joining the new proposed Indo-Pacific Economic Framework for Prosperity (IPEF), unveiled on Tuesday when Biden held bilateral talks with Kishida in Tokyo.

This article was originally published on Deutsche Welle. Read the original article here.

READ NEXT: ‘Everything Everywhere All at Once’ Is the Only Valid Title for This Galaxy-Brained Film 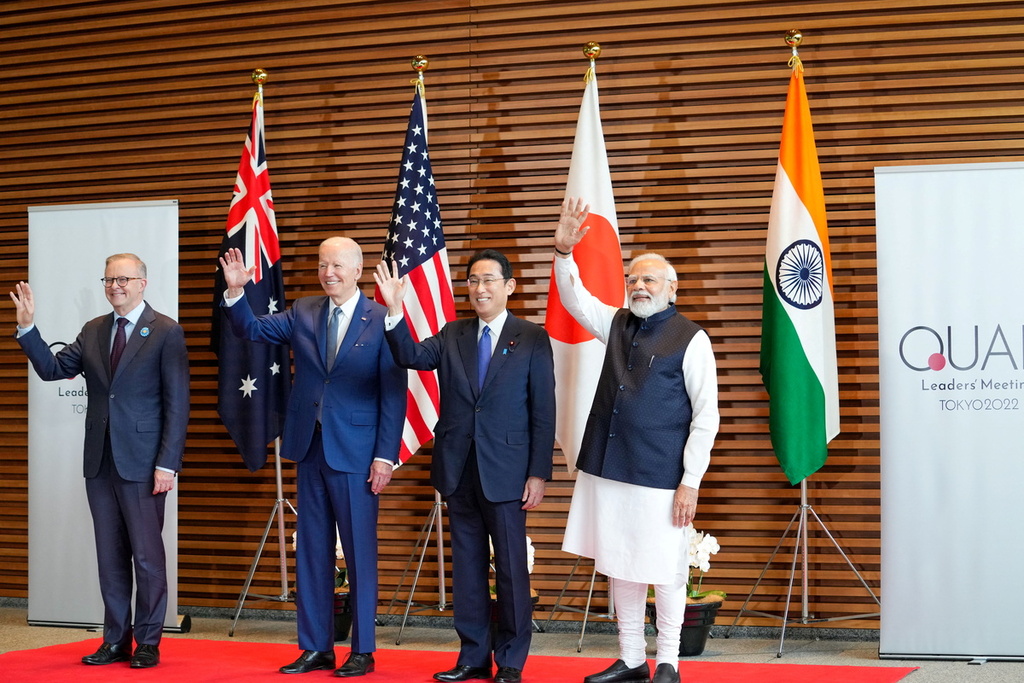 Leaders of Japan, India, Australia and the United States met in Tokyo on Tuesday, looking to put China on notice…

Leaders of the Quad grouping of countries, including India's Narendra Modi, shared concerns over the situation in Ukraine at their…