The Quad summit in Tokyo has praised Australia raising its ambition on climate change, after Anthony Albanese told fellow leaders his government would do more to assist Pacific countries address it.

Albanese stressed Australia’s revised climate policy during the meeting, attended by US president Joe Biden, Prime Minister Narendra Modi of India, and Prime Minister Fumio Kishida of Japan. Albanese was there just a day after being sworn in.

The Joint Leaders’ Statement said: “We welcome the new Australian Government’s commitment to stronger action on climate change, including through passing legislation to achieve net zero by 2050 and lodging a new, ambitious Nationally Determined Contribution”.

In his opening remarks to the meeting, Albanese said the change of government would not change Australia’s commitment to the Quad.

But he differentiated the new government on the climate issue.

“The region is looking to us to work with them and to lead by example. That’s why my government will take ambitious action on climate change and increase our support to partners in the region as they work to address it, including with new finance, ” he said. (Labor announced in the election campaign that it would boost aid to the Pacific.)

“We will act in recognition that climate change is the main economic and security challenge for the island countries of the Pacific.

"Under my government, Australia will set a new target to reduce emissions by 43% cent by 2030, putting us on track for net zero by 2050.”

Albanese said the government would bring “more energy and resources to securing our region as we enter a new and more complex phase in the Pacific’s strategic environment.

Speaking at a news conference later, Albanese emphasised climate change as a security issue and in the context of China’s seeking more influence in the Pacific.

Albanese also said climate change was the main topic discussed when he and British Prime Minister Boris Johnson spoke on Monday. “He welcomed, very much welcomed, the fact that we will have stronger action on climate change, including with a higher 2030 target.”

He and Johnson also discuss the AUKUS agreement, which Labor supports.

Albanese said he looked forward to hosting the Quad leaders in Australia for their meeting next year.

Michelle Grattan does not work for, consult, own shares in or receive funding from any company or organisation that would benefit from this article, and has disclosed no relevant affiliations beyond their academic appointment. 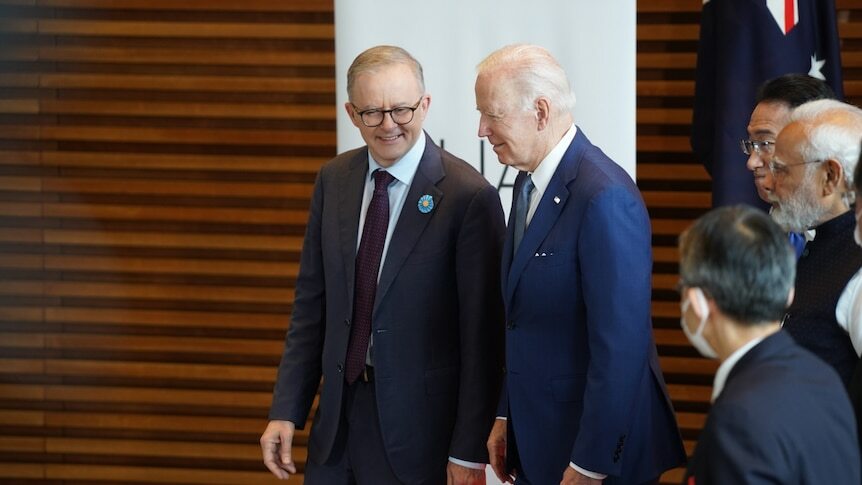 Anthony Albanese pledges climate commitments while meeting with Quad leaders in Tokyo
Prime Minister Anthony Albanese declares that Australia's commitment to the Quad "will not change" under his government, while stressing that…

Anthony Albanese has met with his United States, Japanese and Indian counterparts in Tokyo, flagging a focus on the region…

Crikey
As Albanese heads to the Quad, what are the security challenges facing Australia's new government?