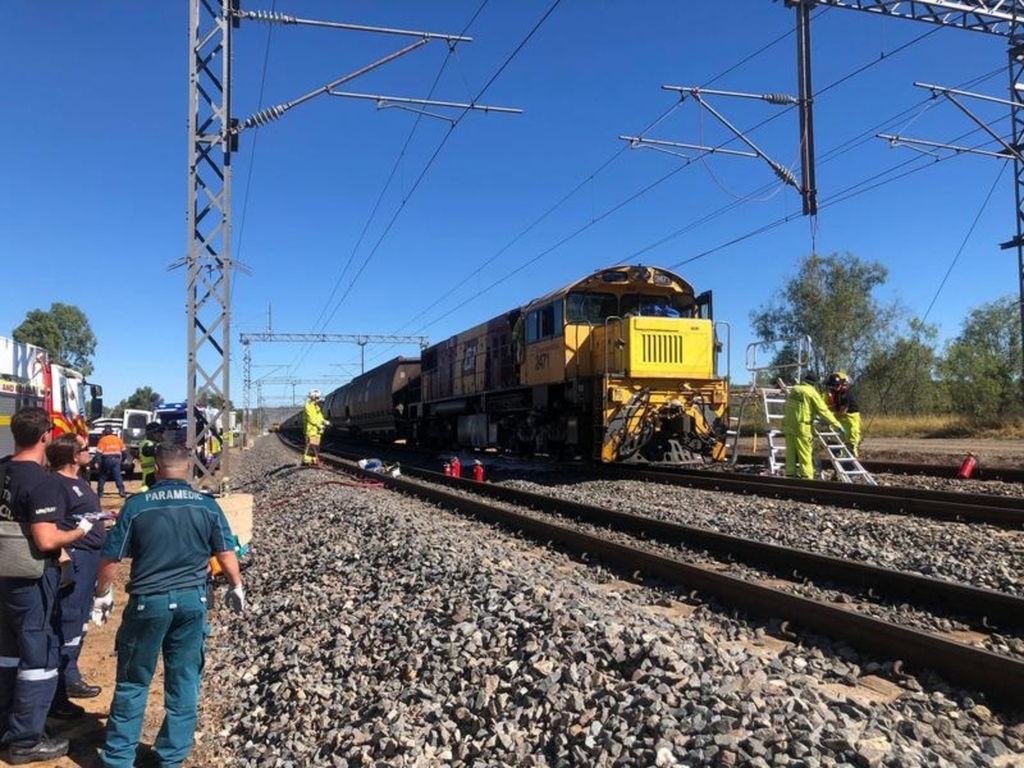 Three Queensland train drivers may have missed caution signals before their locomotive collided with the rear of coal train, killing one of them and seriously injuring another, a report says.

The accident on the Aurizon rail network, west of Rockhampton, fatally injured a 49-year-old Queensland Rail driver on June 18

The Australian Transport Safety Bureau's preliminary report says view of the drivers may have been limited as they driving the locomotive long-end leading at the time.

Long-end leading is when a locomotive is moving along the line with the driving cabin at the rear.

The ATSB report says the network control officer had set the signals to the yellow caution colour because the locomotive was approaching a stationary coal train.

The locomotive drivers partially applied a brake but they were still travelling at 72km/h.

The engineer's speed then set off an signal passed at danger (SPAD) alarm with the network control officer sending the drivers an emergency radio broadcast, but it wasn't unanswered.

Less than a second later the locomotive began fully braking at 60km/h but four seconds later it crashed into the back of the stationary coal train at 40km/h.

The locomotive and the last nine wagons on the coal train were significantly damaged in the crash.

The driver was fatally injured, while the co-driver was seriously injured and the tutor driver suffered minor injuries.

ATSB Chief Commissioner Angus Mitchell says investigators are looking into whether driving the locomotive long end leading had prevented the drivers from seeing the caution signal in time.

"When operating long end leading, the structure of the locomotive and the configuration of the cabin limits vision for the train crew, and as our investigation progresses, the ATSB will review and examine the functionality and cabin ergonomics of the 2470 class locomotive for long end leading operations," he said in a statement on Friday.

"We will also review the nature and extent of the use of long end leading for main line operations, other factors that might have influenced the crew's performance, and the risk controls in place relating to collisions and authority exceedances, such as SPADs, during long end leading operations."

QR has suspended all mainline long end leading operations since the crash, with the practice limited to shunting, turning, setting back and propelling movements.

The National Rail Safety Regulator also ordered all infrastructure managers and rolling stock operators to review the risks associated with long end leading operations by the end of July.

The ATSB said it would release its final report, including any recommendations on improving safety, at a later date.