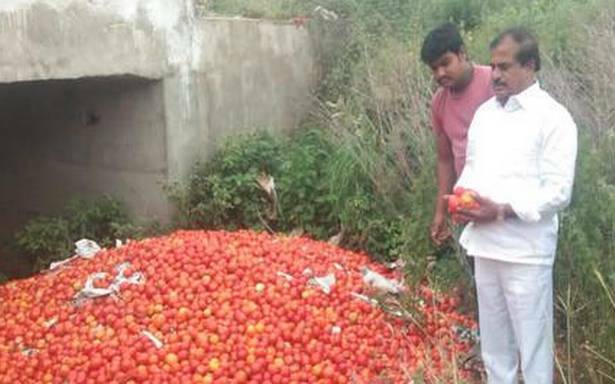 Owing to lack of support price, farmers of Ambakapalli village in Lingala mandal of Pulivendula constituency in Kadapa district dumped their tractor loads of tomato crop into a roadside stream. The farmers resorted to the extreme step as they were not in a position to even recover the cost of cultivation.

Telugu Desam Party Kadapa parliamentary constituency in-charge M. Linga Reddy called on the affected farmers and expressed his support. “The farmers felt disheartened at not even getting ₹2 a kg at the local market, which is far less than the actual cost of production”, he said.

Mr. Reddy and other leaders got down the culvert into the stream and inspected the tomatoes. “We initially thought they could be damaged ones, but they are really good quality tomatoes, only dumped owing to lack of remunerative price,” he said.

Recalling the Agriculture Minister K. Kannababu’s statement made a couple of days back in Proddatur on making farming remunerative, the TDP leaders urged the State government to get down to concrete action.