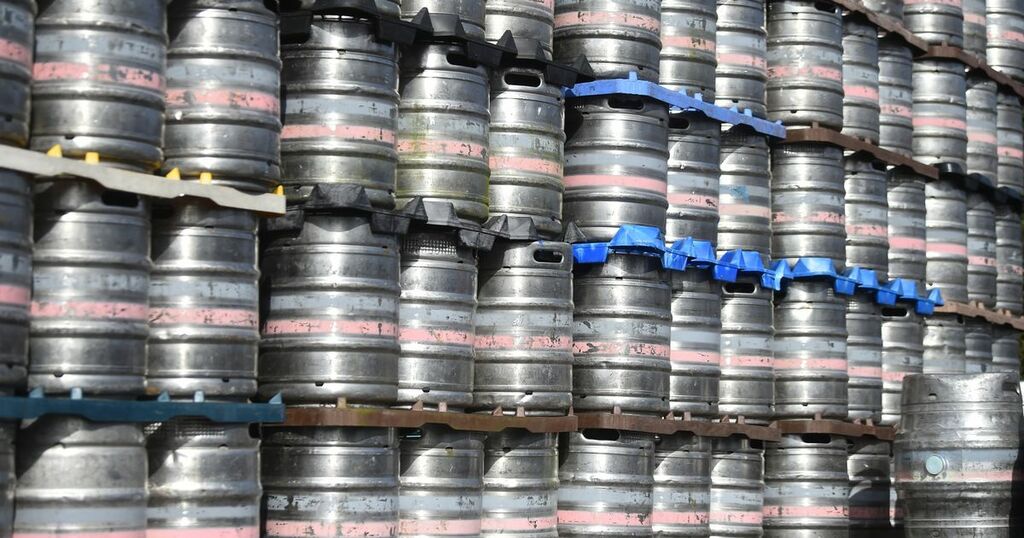 A triple-whammy of shortages in draught beer, bottled drinks and barrels is decimating pubs.

The lorry driver crisis has hit deliveries and collections, leaving landlords light and brewers short of kegs to refill.

Mountains of empties are piling high outside inns - making them a target for scrap metal thieves.

A spokeswoman said: “The shortage of qualified HGV drivers is heavily impacting multiple areas of the brewing and on-trade sector including keg uplift.”

Manager of The Avenue pub in Hull, East Yorks, Rob Sharpe, said: “Getting hold of bottled products has caused an issue, there’s been times when there’s been shortages of Carling and Coors.

“There’s also a shortage of kegs to store beer in; breweries are getting into a situation where they’re making the beer but we don’t have enough barrels to store it.”

Mr Sharpe said the delivery crunch - combined with hospitality staff shortages - was a “recipe for disaster” for pubs.

Boss William Lees-Jones said: “There is just a huge number of empties in the system. We keep sending out trucks to pick up empty kegs.”

British Beer & Pub Association chief exec Emma McClarkin said: “Like many other industries across the UK, the HGV driver shortage and other labour shortages are having an impact on our sector.

Meanwhile millions of tonnes of British-grown fruit and veg is being thrown away because there are not enough workers to pick, process and pack them.

Staff shortages hit 34.5 per cent across the industry in July and are expected to be even worse in August when figures are finally calculated. The previous high was 22 per cent recorded in autumn 2019, said trade journal The Grocer.

It means yields are down because produce isn’t being picked and what has been picked may end up rotting through lack of storage or processing - some processing plants have found it so hard to recruit season workers that they have been forced to shut.

In one case, growers in the east of Scotland have lost 2.5 million heads of broccoli and 1.5 million cauliflowers costing a combined total of £1.1 million because of a 20 per cent shortgall of staff and a lack of storage capacity, said The Grocer.

The NFU farming union and the growers’ body, British Summer Fruits, are among organisations calling on the government to relax post-Brexit immigration limits on seasonal workers from within the EU and beyond to help rescue late summer harvests.

The situation has been made worse by inflation-busting pay rises to encourage new recruits said NFU Hoticulture and Potatoes Board chair, Ali Capper.

She added: “Everybody’s so short of staff and wages are inflating like mad. I’m hearing of wage inflation between 15% to 30% year on year.”

So serious is the situation that fruit pickers are being flown up to 6,000 miles to the UK from Barbados, Nepal, Tajikistan, Kenya, the Philippines and elsewhere because farms cannot find British or European workers.

More than 16,000 labourers from 37 countries were recruited by horticultural farmers this year on seasonal workers’ visas, according to an analysis of Home Office data.

Before Brexit, most of these seasonal visas were used to hire workers from eastern Europe.

However, farmers said it was becoming harder to recruit Bulgarians and Romanians because many with settled or pre-settled status had taken less labourintensive or better-paid jobs, while others returned home following Brexit and the outbreak of the pandemic.

The majority this year came from Ukraine followed by Russia, Belarus and Moldova.

Nepal was joint fifth with Bulgaria. More than 100 pickers have been recruited from Barbados to pick blueberries, strawberries, raspberries, herbs and potatoes, a change from the sugar cane, yams and sweet potatoes grown on the Caribbean island.

Barbados’s ministry of labour said it expected the scheme would be popular with residents “who don’t mind labouring in cold climes, or being away for lengthy periods, spanning six months and over”.

Farms are also recruiting from the central Asian countries of Kazakhstan, Tajikistan, Uzbekistan and Kyrgyzstan, while a small number are coming from further afield, from locations including Kenya, Nigeria and the Philippines.

Farmers said they usually cover the majority of travel costs.

David Simmons, managing director of Riviera Produce in Connor Downs, west Cornwall, which produces cauliflowers, cabbages and broccoli for supermarkets, said most of the 300 workers recruited this season had come from Russia, Kazakhstan and Tajikistan.

He said: “Over the last five years, we have been very reliant on Bulgarians and Romanians, but we have lost about half of our staff this year during the season.

"They’ve just decided to go back home or to Germany or other countries, or they have become delivery drivers or taken jobs which are easier than working out in the fields."