On the morning of May 12, two bulldozers rolled into Southeast Delhi’s Madanpur Khadar. They had come to demolish three buildings, all under construction.

The city has been witnessing such scenes since April 20, when the municipal authorities launched a controversial anti-encroachment drive in the wake of communal violence in Jahangirpuri. The drive has drawn condemnation, even protests, for disproportionately targeting properties of the minority Muslims, most of them poor.

In Madanpur Khadar, the properties targeted for demolition belonged to Saif Mehmood, Soni and Moosa. Soni and Moosa didn’t give their last names, and Moosa wouldn’t speak to the media either.

Saif, 28, and his family had been constructing a six-storey residential building for the past 8-9 months. They rented out the ground floor to a group of boys while the rest of the floors were still under construction. “In the morning the boys told me they had been asked to leave. That is when I found out that the bulldozers were coming,” said Saif, who immediately reached the spot.

The machines promptly set about demolishing Saif’s building. “I have put my entire life’s savings into this. We had to pay money to municipal officials and the police to start construction. Now they are together demolitioning it,” he said.

Saif claimed he wasn’t given notice of demolition by the South Delhi Municipal Corporation.

Rajpal Singh, chairperson of the South Delhi Municipal Corporation, however, claimed they had sent a notice about the anti-encroachment drive a fortnight ago. Had the owners of the three buildings targeted for demolition on May 12 been notified personally. “We sent notice to people living in that unauthorised area,” he said. Singh declined to share a copy of the notice with Newslaundry.

Madanpur Khadar is classified as an “unauthorised colony”, a term used by the Delhi Development Authority for unplanned settlements raised in violation of zoning rules, typically on private land. Delhi has over 1,700 such colonies.

The bulldozers knocked down only a few pillars of Saif’s building, leaving municipal workers to finish the job.

The bulldozers moved to another under-construction house. Soni’s. “My entire life’s savings are invested in that house, how can you break it?” she cried out to the municipal officials supervising the demolition.

Several of Saif and Soni’s neighbours were angered by the destruction of the houses. Netaji Shamshuddin, 70, accused the municipal officials of “targeting certain communities”.

“Yes, many of these buildings may be illegal. But do you think only poor people construct illegal buildings? To construct these buildings people have had to pay the MCD and the police, they have put their lives into building homes and one fine day you come and decide you will break them all down? I want to know where the MCD and the police were when the construction had begun?” he asked.

The residents sought to stage a protest against the demolitions, only to be beaten back by the police and the CRPF personnel accompanying the demolition crew. The residents then went to Amanatullah Khan, the local MLA from the Aam Aadmi Party, who arrived by 12 pm. Khan’s presence caused the gathered crowd to swell.

Three days ago, a bulldozer had arrived about 2.5 km away at Shaheen Bagh. But protests by the residents there had forced the demolition crew to leave without touching any property. Khan had played a leading role in that protest, for which the South Delhi Municipal Corporation filed a complaint against him on May 9. The complaint led the Delhi police to register an FIR against the MLA for obstructing a public servant in discharging their duty and assaulting a public servant on duty, among other charges.

In Madanpur Khadar the police didn’t allow Khan and his supporters to go near the bulldozer, placing barricades around the demolition site to keep them out. They did, however, start a negotiation with Khan, with assistant commissioner of police Vinay Mallik representing the police.

The AAP legislator asked for the demolitions to be stopped immediately, but Mallik said he couldn’t prevent the BJP-led municipal corporation from doing its job. After 45 minutes of back and forth it was agreed that two of Khan’s supporters would accompany the police to inspect the demolition site and report back to Khan. In the meantime, Khan asked that the police leave the area and “not scare the people with these fear tactics”.

After his party workers had returned from inspecting the site, Khan told the police he would not leave until the bulldozers were gone. The police refused.

By now, 200-250 people had gathered and started shouting slogans against the police. The police warned Khan they would have to arrest him if he “continued to spoil the situation”. He should leave with the crowd immediately, the police told the legislator and sought to assure him that the bulldozers would leave in 15 minutes.

The MLA told the police the crowd would continue to protest peacefully but reiterated that he wouldn’t leave until the bulldozers did. He and his workers then sat down on the road.

An hour later, at around 1:45 pm, the bulldozers were still tearing down the buildings. The MLA and his supporters stood up and started demanding the police stop the drive right then. He was immediately surrounded and taken away.

The police and the CRPF then turned to the protesting crowd, lathi charging the angry men and women who responded by pelting stones. A few protesters and police personnel suffered minor injuries.

The protesters made four attempts to move towards the police line, only to be beaten back each time. At least nine of them were detained, including two women who were shouting slogans but not pelting stones.

Esha Pandey, a deputy commissioner of police who was at the scene, refused to speak to the media on camera. Later, however, she confirmed that Khan had been arrested along with five of his supporters. “The police are still counting how many people have been detained,” she added.

Late in the evening, the legislator’s brother, Ismatullah Khan, confirmed to Newslaundry that the police had arrested the AAP leader and lodged an FIR against him.

Khan had been taken to the Kalkaji police station after being detained, his brother said. “But at around 8pm, they took him from there and the police are not telling us where he has been taken,” he added. “We have also not been given a copy of the FIR.”

All pictures by Nidhi Suresh. 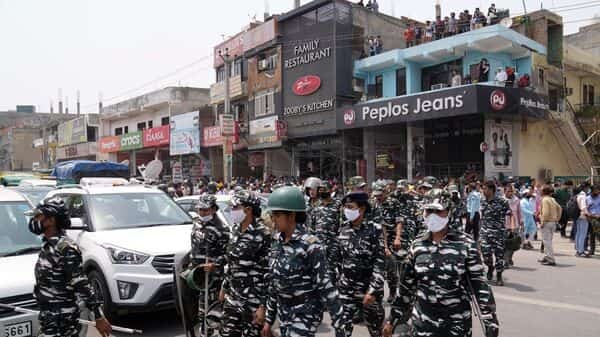 ‘Almost 70% people to be homeless’: Delhi Dy CM to Amit Shah on demolition drive. Details here
‘This will lead to a huge destruction in the national capital. Almost 70% of the population of Delhi will be…

Livemint
One subscription that gives you access to news from hundreds of sites
Anti-encroachment demolition drive underway in several parts of Delhi today. Details here

Protests erupted at Delhi's Shaheen Bagh on Monday with hundreds of people, including women, opposing the anti-encroachment drive of the…