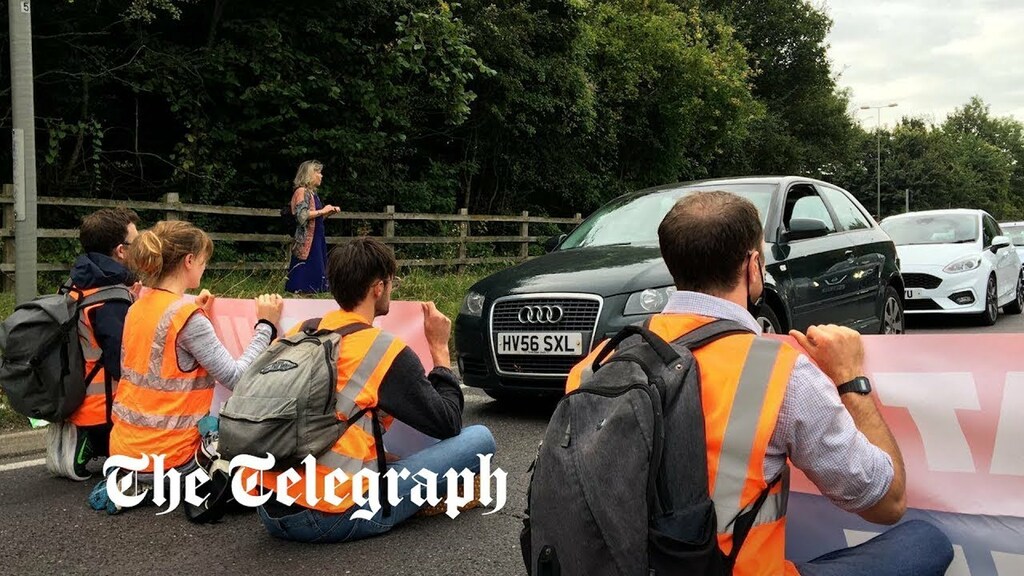 Activists from Insulate Britain sat on the road holding banners at several junctions on the UK's busiest motorway.

The diversions and road closures caused traffic chaos as people tried to get to work during rush hour. National Highways said there was disruption at Junction 3 for Swanley in Kent, Junction 6 for Godstone in Surrey, Junction 14 for Heathrow Terminal 5, Junction 20 for Kings Langley in Hertfordshire, and Junction 31 for Purfleet in Essex.

Police forces from across the South East were called to deal with the disruption, and at least 74 arrests were made.

Metropolitan Police officers arrested 14 people, and chaired a meeting with a number of agencies on Monday to share information. A spokesman said: "We are working with colleagues at Heathrow Airport to establish what, if any, impact the protest had on the airport."

It is thought this number will rise.

A spokesman for Essex Police said: "We received a call shortly before 8.15am today reporting a number of people were blocking the road near to Junction 31 for Lakeside.

"Officers attended and worked to resolve the situation quickly and safely and this included shutting the road.

"Twelve people were subsequently arrested on suspicion of highways obstruction and they are currently in custody.The road has now re-opened."

Videos from the scene showed scenes turning ugly as motorists swore at the protesters, with one man appearing to get out of his car and try to drag an activist off the road.

Chief Inspector Paul Austin said: "This incident caused significant disruption and our officers worked to resolve it as quickly and safely as possible.

"I want to thank the drivers affected for their patience and understanding."

The M25 protest, in pictures

Who are Insulate Britain?

The group was launched on Aug 20 by members of Extinction Rebellion, with one demand: that Boris Johnson's Government insulate every house in the UK.

In a video citing climate issues and people having to choose between heating their homes and feeding their families, it said if the demands were not met by Sept 1, further action would be taken.

This action was the disruption on the M25.

Insulate Britain has a tiny following on social media - with 441 likes on Facebook and only 329 followers on Twitter in the hour that followed arrests around the motorway.

What are the group saying?

Insulate Britain describes itself as "a new group demanding that the Government gets on with the job of insulating Britain's homes".

Its website warned that the disruption on Monday morning is "just the start", and "action will continue until the Government makes a meaningful commitment to insulate Britain's 29 million leaky homes".

One supporter, Liam Norton, a 36-year-old electrician from London, said he is "shocked at the lack of significant action from our Government".

He went on: "It's a no brainer. Insulating Britain will reduce emissions, provide hundreds of thousands of jobs and stop our elderly dying in cold homes each winter. So stop messing about, Boris, and get on with the job.

"As soon as a statement is made that we can trust and is meaningful, we will get off the roads."

Another activist, Zoe Cohen, 51, from Warrington, Cheshire, said: "Boris needs to stop making things worse - with all their road building, airport expansion, HS2 white elephant and new oil fields - and get on with the obvious stuff like insulating the 29 million homes that need to come off fossil fuels.

"We can't get to net zero if they don't take responsibility for this. Only the Government can make this happen."

'Not only incredibly dangerous... but also backfires in environmental terms'

AA president Edmund King said: "This action is not only incredibly dangerous in potentially putting lives at risk but it also backfires in environmental terms by causing more delays and more vehicle emissions.

"These are some of the busiest sections of the M25 where tens of thousands of drivers will have been affected and has a negative knock-on effect on economic activity."

National Highways head of service delivery for the South East Sean Martell said: "We work hard with police and other partners to limit the effects of protests on the strategic road network.

"We will do all we can to keep drivers up to date and on the move."