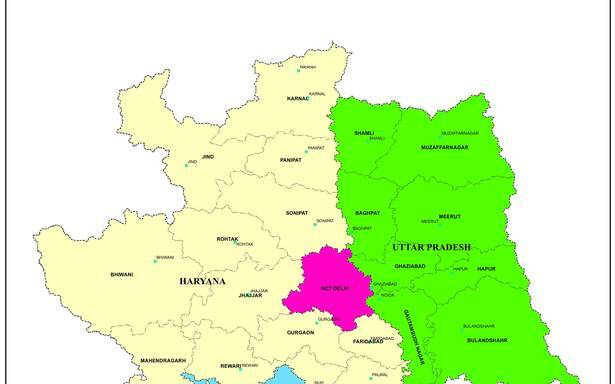 Alwar in Rajasthan, Panipat in Haryana and parts of Muzaffarnagar in Uttar Pradesh could be removed from the National Capital Region (NCR) based on a policy approved by the NCR Planning Board (NCRPB) on Tuesday, a senior Housing and Urban Affairs Ministry official said on Wednesday.

At a meeting chaired by Housing and Urban Affairs Minister Hardeep Puri, the NCRPB on Tuesday decided that the NCR delineation would be carried out based on the principle of 100 km radius from Rajghat in Delhi plus 1 km in each direction along major transport corridors like National Highways, expressways, State Highways and Regional Rapid Transit Systems. According to sources, Haryana, which was represented by Chief Minister Manohar Lal Khattar, had called for an even smaller radius. However, there was consensus on the 100 km principle.

The official said that there had been a view within the NCRPB that the NCR, which was created to ensure harmonious development in the region, had become “unwieldy”. The reduction in its size would lead to regulated transit-oriented development along the highways, the official said. The new boundaries would require a gazette notification and would be mentioned in the Regional Plan-2041 that is being drafted currently, the official said.

Another decision taken by the board was to change the name of natural conservation zones, as introduced in the Regional Plan-2021, to “natural zones” in the upcoming Regional Plan-2041. Another senior official had said on Tuesday that the definition of these zones would be included in the draft Regional Plan-2041 that would be published by November. The draft plan, which was approved by the board on Tuesday, would be open to public comments for 30 days. The final plan would be notified by March 2022, the Housing and Urban Affairs Ministry said in a statement on Tuesday.

The NRCPB also decided to empower States to decide whether tehsils that fall partly inside the NCR boundary should remain in it or not.