A pro-fracking group, which has been reprimanded by the Australian Electoral Commission (AEC) and endorsed by CLP candidates, has attacked a couple that owns a Northern Territory cattle station in the sights of several gas companies.

Back Beetaloo's corflutes and Facebook ads have cropped up across the Territory during the federal election, but without an official authorisation it is difficult to determine who is behind the campaign, despite claims it is a "grassroots" organisation.

One ad, a banner hung on an overpass on one of Darwin’s busiest roads, has taken aim at the Ravazzotti family, which owns several stations in the Beetaloo region.

The family opposes fracking in the Beetaloo and the ad accuses it of using “foreign control to block thousands of jobs coming to the NT”.

The Beetaloo Basin is a large gas resource 700 kilometres south west of Darwin, which gas companies are hoping to commercialise in the next few years.

The banner has since been removed.

Darwin City Council told the ABC it had no records of an application to hang the banner, nor records of council workers taking it down.

Since 2018, the Ravazzotti family has invested more than $200 million buying six cattle stations in the Top End, four of which are in the Beetaloo Basin.

During a visit to Darwin, one of the family’s station managers saw the banner on Bagot Road and sent a photo to Luciana Ravazzotti.

“We couldn’t believe that someone would stoop to that level, to personally attack us,” she said.

Ms Ravazzotti and her partner, Pierre Langenhoven, moved to Australia from South Africa 22 years ago.

“We are Australian citizens, we absolutely love Australia and our lives are here,” she said.

All of the Country Liberal Party (CLP) candidates in this year's federal election have appeared on the organisation's Facebook page, wearing branded T-shirts.

"If they want to support one group, they need to come look at pastoralists and understand the challenges pastoralists are looking at as well."

Who is behind Back Beetaloo?

On its Facebook page, Back Beetaloo says: "Our mission is very simple – Tell the Federal and Territory Governments to unlock the Beetaloo Basin to benefit all Australians."

According to data published by Facebook, the organisation has spent $9,000 on Facebook ads since it was created and more than $2,000 during the election.

Despite the organisations' numerous ads on Territory streets and social media, its ads lack an official authorisation, which is required of all political advertisers in Australia.

The AEC said it had since written to the organisation after the ABC brought it to the governing body's attention.

The AEC said it was receiving a number of complaints each day, and was adopting a "graduated approach to enforcement", with the first step being a warning or reminder to advertisers.

The page used to claim that it was a "grassroots" organisation but this description has since been removed.

A search for the Back Beetaloo's domain name shows it is registered under a company called Campaign Digital.

An ASIC search for the company shows it is registered to a sole trader named Nick Palmer in the Sydney suburb of Cherrybrook.

Despite being founded in Sydney, Back Beetaloo's website takes aim at interstate activists.

"Unfortunately there are numerous activists from thousands of kilometres away from the Territory who are driven on depriving us from this once-in-a-lifetime economic opportunity," the website reads.

"Most of them genuinely could not find the Beetaloo on a map let alone know anything about the communities that would actually benefit."

The banner photo on the group's Facebook page shows a generic image of a highway cutting through red dirt and low bushes — very different country to the savanna woodlands of the Beetaloo region.

'Astroturfing' on the rise

Daniel Angus, a Queensland University of Technology academic who studies online culture, said the Facebook page had all the characteristics of a "very sophisticated astroturfing campaign".

Astroturfing, he said, referred to when a brand was set up at arms length from a political organisation or political lobby and made to look grassroots or community-driven.

"When in fact, it's not ... It's been financed directly from the pockets of lobby organisations," he said, speaking generally about astroturfing.

"They're very corrosive, because you have these lobby groups that are well-financed, setting up pages that look authentic to sow seeds of misinformation. "

He said Back Beetaloo's "slick design", lack of obvious community engagement and "inherently political" nature fit the bill of an astroturfing campaign.

The CLP and Back Beetaloo have not responded to questions posed by the ABC. 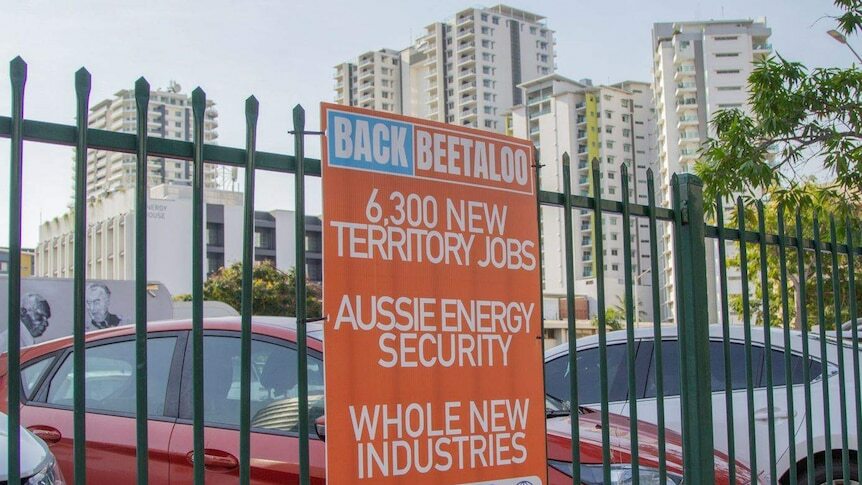 CLP candidates say they don't know who is behind Back Beetaloo page
Candidate for Lingiari, Damien Ryan, and NT Senate candidate Jacinta Price, who appear in campaigns promoting gas exploration in the…

ABC News
One subscription that gives you access to news from hundreds of sites
In the battleground seat of Lingiari, the Coalition hopes to dim Labor’s star power with a first-time upset

The Guardian - AU
What are the rules around truth in political advertising in a federal election?

Signs falsely depicting independent candidates as part of the Greens are in breach of the Electoral Act, the Australian Electoral…