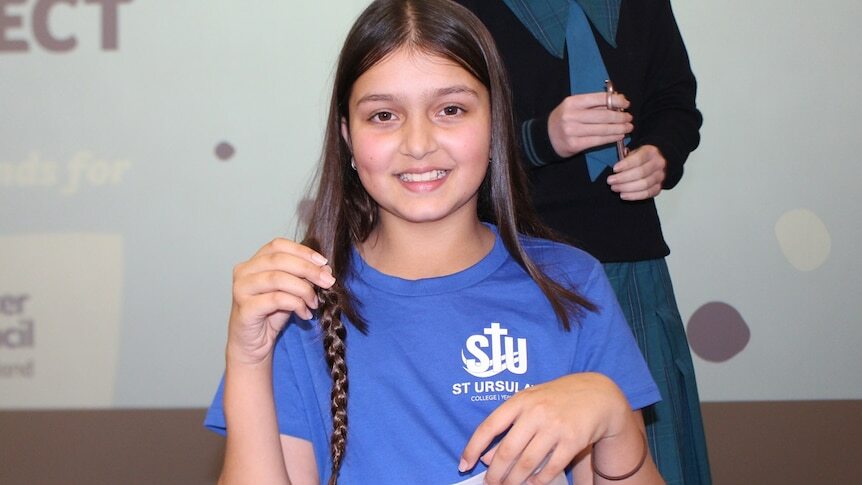 Priya Ramswarup had a one-in-four chance of survival after a cancer diagnosis at the age of six.

"I was told I had a 25 per cent chance of surviving, which was really shocking, obviously, to be that young and to be told that," she said.

In 2015, a lump on her hand led to her being diagnosed with stage four high-risk alveolar rhabdomyosarcoma; a rare childhood cancer.

The central Queensland girl endured more than 50 weeks of treatment, including 30 rounds of radiation, at Westmead Children's Hospital in Sydney.

"People think … you just do chemotherapy and that's it, and you're cured just like that.

"It feels really good," she said.

Not only has Priya been busy studying, playing soccer, drawing and cooking — she has also been recognised as "Australia's highest individual fundraiser" for the Cancer Council's 2021 Ponytail Project campaign.

"I was really happy to raise a lot of money for the Ponytail Project and my school and I was so thankful for all my sponsors," she said.

"I was mostly just lucky to have so many people that you didn't even have to ask — as soon as they heard about it, they donated, they just were so interested in helping."

Cancer Council Queensland chief executive Chris McMillan says 1 in 2 Australians will be diagnosed with cancer by the age of 85.

"It's safe to say the Ponytail Project has become a right of passage for students at St Ursula's," Ms McMillan said.

"We are thrilled to have their support each year, raising funds for vital cancer research and bringing us one step closer to a future free from the burden of cancer."

The Ponytail Project has raised $494,000 in Queensland so far.

Support with 'all the love in the world'

College Captains Katie Russell and Vicky Brieffies encouraged 18 students to chop and donate their hair for the cause.

"A lot of my friends and family have been affected by cancer and I know a lot of the school community has as well," Katie said.

"I want people to go out there and support those who are suffering, make sure that they have all the love in the world, and understand how much we care about them.

"The local community has been such a huge help and we really couldn't have done as well as we did without them."

Priya said the support of family, friends and her Maltese poodle Bailey meant the world to her throughout her illness.

"It was definitely a difficult experience," she said.

"But I'm glad I went through it at the same time because it definitely made me see things a lot differently, in a good way."

Priya said many people had no idea how difficult cancer was until it affected them personally.

"I had a massive phobia of needles … but after that experience, now I've dealt with needles a lot better.

"But I guess just people don't factor in the things you have to go through like the operations and the transfusions of blood and platelets and things like that.

"That can be really difficult to watch. There's certain foods I can't eat now because I've seen or eaten them in hospital."

Priya urged anyone battling cancer to prioritise "a healthy mindset".

"Stay positive throughout the entire time, don't get yourself down," she said.

"If you stay positive, it's a lot easier to deal with."

Priya says she will continue to raise funds and fight for cancer awareness every day.

"I'm glad that I was able to be lucky enough to survive," she said.