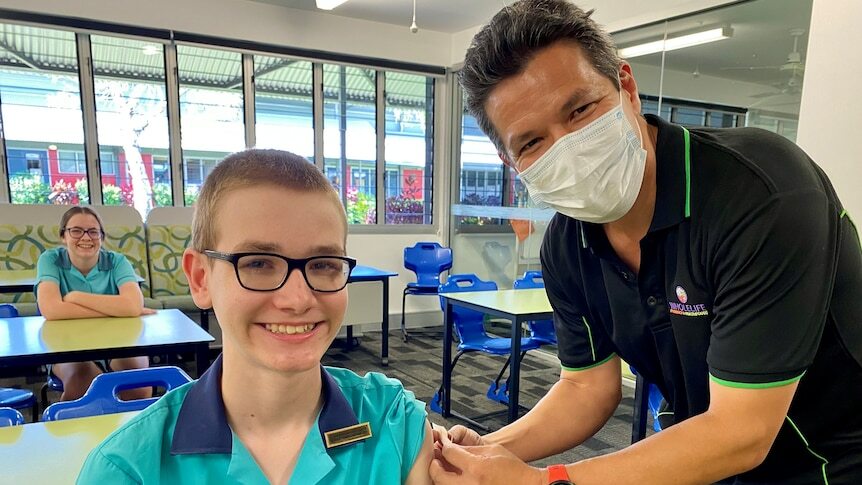 A mass school-based COVID-19 vaccination program will be rolled out in private schools in Far North Queensland from today and state schools are soon to follow after an unexpected announcement from the Premier.

Pharmacists will start giving COVID vaccines in Queensland private schools from today, with the program to be extended to state schools in a surprise announcement made today.

Pharmacy Guild of Australia national president Trent Twomey said pharmacists would deliver the Moderna vaccine to students aged 12 and over.

But in an unexpected shift in Parliament this morning, Premier Annastacia Palaszczuk said the program would be made available in state schools, starting in Far North Queensland.

"This will start in Mareeba on Friday with more schools to be announced shortly," she said.

"We hadn't, as of close of business yesterday, received a signed agreement from the Queensland Government, but I am pleased to say that as of this morning, we do," Mr Twomey said.

"So now the Pharmacy Guild will be in contact with pharmacies so they can reach out to school principals to get the program up and running.

The Queensland government has operated COVID-19 pop-up weekend clinics for the entire community at selected high schools in the south-east, Darling Downs, Mackay, and central Queensland, and had administered vaccines in some schools in the west and in the Torres Strait.

Yesterday, in a statement, the government said there were no plans to implement a statewide school-based COVID-19 vaccination program for school students at this time.

Hundreds to be vaccinated through school program

Mr Twomey said there had been an enormous amount of interest in the school-based program.

"We've been very happy with the response," he said.

St Andrew's Catholic College in the Cairns suburb of Redlynch is part of the school-based vaccination program.

"Not everyone consented because we believe that some may have already had the vaccination, so we can explore those figures down the track," Dr Mangan said.

"Without doubt, the medical advice says that this [vaccination] is the best way to combat COVID-19, so it gives our young people the opportunity to be vaccinated.

Year nine students Lachlan Bradridge and Annika Reiha will be among the cohort receiving their first COVID vaccine this week.

"I'm not too worried," Lachlan said.

"I've never been afraid of needles and I find it comforting to have it through a school program because my mates are there and they support you and we all get it done together," he said.

Federal Department of Health figures show 56.7 per cent of Cairns residents have received both doses of a COVID-19 vaccine.

The national figure for both doses is 63.4 per cent of people aged over 16.