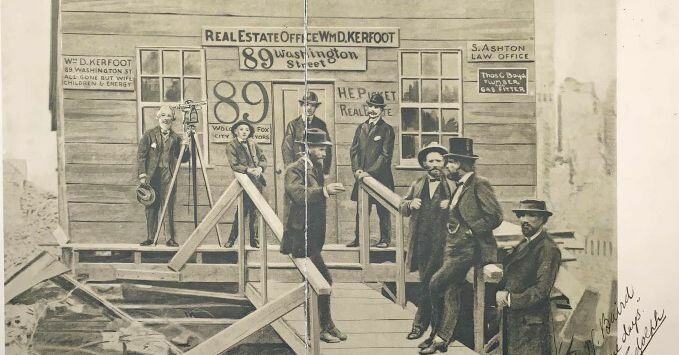 As the Great Chicago Fire spread north from downtown in 1871, Lyman Baird knew what he had to do. He left his home at Division and LaSalle streets and made his way downtown, against a tide of fleeing people so intense he had to ditch his horse and buggy.

Baird had to find out about his company’s property records. An early partner in the real-estate firm Baird & Bradley, known today as Baird & Warner, he knew Chicago’s courthouse was being consumed, and with it the documents proving who owned what in the frontier boomtown.

His own office was across LaSalle Street from the courthouse, and it too was a total loss. Flames kept him from investigating further and he headed back for home on foot. Company archives said he barely made it back across the river using the LaSalle Street tunnel, a conveyance that opened just a few months prior. The tunnel had filled with smoke and he crawled part of the way.

After a few days, the company safe was reached and determined to be cool enough to open. All the records were intact. The safe had been built into the office building’s brick foundation, said Lucy Baird, the company’s archivist, and Lyman’s great-great-great granddaughter. Those surviving records from Baird and other companies helped government officials reestablish property ownership after the fire.

“I think a lot of it was luck, honestly,” Lucy Baird said. “A lot of other companies, in some of our records, it says they opened their safe within a few days and the oxygen rushing in to the brick and metal that was still so hot burned all the records days after the fire.”

Newspapers at the time chronicled whether firms had found their documents. Chicago Title & Trust, also with roots that predate the fire, has in its files a Chicago Times article about the property records quandary. “The annoyance, calamity and actual distress that will arise from this misfortune are not yet properly appreciated. Something equal to the necessities of the case must be done quickly,” said a story from about three weeks after the fire.

Three firms that preceded today’s Chicago Title managed to save its records of Cook County land indices and abstracts. In one case during the fire’s pandemonium, a partner pulled a gun on a passing wagon driver to secure his services, according to company accounts.

In 1872, the Illinois Legislature passed the Burnt Records Act, ensuring that private company records could be used in court to establish ownership. It gave Chicago a legal basis for rebuilding.

The difficult business of matching owners to property was made easier by Chicago’s square and rectangular plats and sections, legal divisions relatively simple to reconstruct, said Dennis McClendon, a longtime cartographer here. Chicago’s grid system has its virtues.

For all its tragedy, the fire is well-documented as having powered the growth of Chicago and making it a center for experiments that advanced architecture.

Stephen Baird, CEO of today’s Baird & Warner, the state’s largest independent family-owned real-estate company, said the effect was profound. “The fire actually enabled the city to redesign itself away from some of the things that existed in East Coast cities.” Baird, Lyman’s second great-grandson, was thinking particularly of alleys, which in most of Chicago keep the public’s refuse off the public’s way. Other cities collect garbage in the street.

“It was an economically booming place at the time of the fire,” he said. “It became a place to rebuild a new city.”

Baird said the thinking about how to achieve a clean and orderly city got its full expression in Daniel Burnham’s 1909 Plan of Chicago. The document still has influence for its vision and values, even if some recommendations fell by the wayside.

But Lyman Baird could spare little thought of the future as he got back to his family that awful night, still unsure of the fate of his records. With flames hurling toward their home, the family got hold of a grocery wagon and filled it for an evacuation. They took a grand piano, a canary and a desk that sits today in the Baird & Warner offices at 120 S. LaSalle.

“It’s wild to think they would put a grand piano in there,” Baird said. The family made it up to a friend’s dredging yard on Goose Island and was safe, but their home burned.

After finding their records secure, the company sent out a letter to contacts, dated Oct. 12, 1871, in its archives. It spoke of devastation. “But it has not crushed the indomitable energy of our citizens, who are daily holding meetings to consider the question of rebuilding upon the ruins, and the preparatory work has, in many instances, already begun,” it said.

“Assistance will be needed to accomplish such a vast work, and the courage exhibited presents an inviting field for investment by those who have funds for that purpose.”

Out of that fire grew buildings and boosterism.