By Edwina Seselja and Sally Eeles 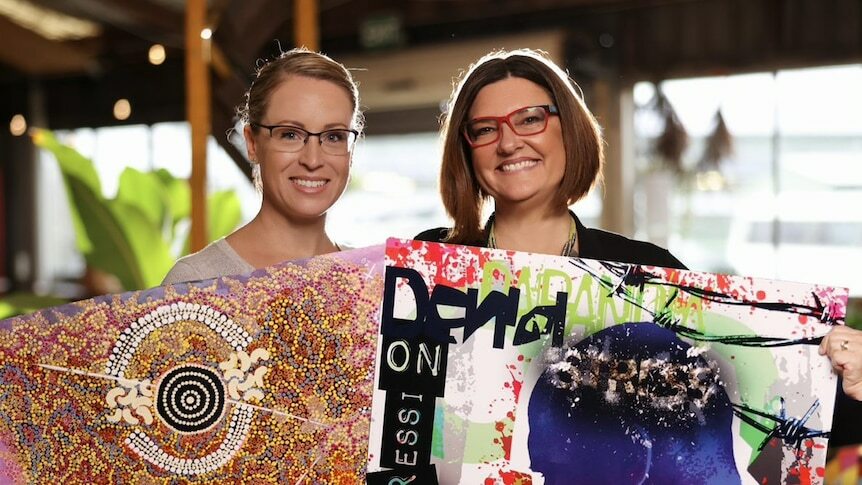 A Brisbane social enterprise and not-for-profit is tapping into the talent inside prisons to reskill inmates in graphic design and 3D animation, preparing them for employment opportunities on the outside.

Graphic designers Kelly Willmott and Amanda Shepherd teamed up and launched Green Fox Studio in 2018, which operates a not-for-profit organisation that facilitates training inside a local prison in graphic design and 3D animation.

"This company began with Amanda and myself, coming up with this grand plan to change the way we worked and to give people a second chance," Ms Willmott said.

Ms Shepherd said she wanted the way she lived and worked to set an example to her children.

"After 20 years of being a graphic designer, I had this kind of burning desire … to give back to the community and also to be able to show my children that you could actually do something you love that contributed back to society," Ms Shepherd said.

Ms Willmott and Ms Shepherd were not sure what to expect when they passed through the prison gates at the high security facility near Ipswich but what they discovered inside surprised them.

"I was 100 per cent blown away at what they were capable of doing and I suppose the breadth of experience that we actually had, and the dedication," Ms Shepherd said.

Ms Willmott said at her first presentation inside the prison, the participants were full of questions, wanting to know how things were done, the reasoning behind design choices and who the clients were.

"When I saw that interest, it really made me believe that this could work," Ms Willmott said.

"There is so much interest in there and they have so much time to learn new skills, we should really be encouraging this while they are serving their sentence."

After interviewing around 50 inmates, Ms Willmott and Ms Shepherd took on nine inmates as part of the program, which enabled the participants to earn a wage inside.

The participants, who ranged from 18 to 70 years, were as diverse in their skill set as they were in age.

Some were naturally artistic while others were barely comfortable using a computer.

Ms Willmott said working with inmates allowed the design studio to nurture original works that were not influenced by external trends.

"A lot of designers design because of the influence we see from outside," Ms Willmott.

"It's really just about showcasing the extraordinary talent that we have inside [prisons] and tapping into that and letting people know that there is a really amazing skill set inside that we forget about."

'This offered me direction'

One of the inmates who joined the project at its conception was released from the facility last month and joined the Salisbury graphics design studio as a full-time apprentice.

He said he didn't know how to put into words how grateful he was for the opportunity to learn and make a fresh start.

"I think I would have lost my shit.

"Inside there is pretty harsh and it's easy to go down the wrong path but this offered me direction.

"I've relied on them for guidance."

Ms Shepherd said the new apprentice's talent was clear from the beginning.

"We just saw this real raw talent and thought this would be a really awesome opportunity to put that into digital skills," she said.

The design studio also contracts out to other inmates, setting them up as freelancers when they are released.

"What we offer is that these guys can actually go out and they can start their own business and they can work from home and they can freelance and be relatively anonymous," Ms Shepherd said.

Helen Black is the managing director workRestart, a not-for-profit and social enterprise that works to empower people with an experience of incarceration and said the art and design program inside the prison was an Australian first.

"What we're finding is the more opportunities we provide people, to be able to understand their skills and abilities, and apply them when they get out … we've got a better chance at reducing re-offending."

Ms Black said having new skills outside of the traditional crafts like wood and metal work that is often provided in prisons, opened up inmates to new opportunities that might be better suited.

Both Ms Willmott and Ms Shepherd said the participants have played a huge role in shaping the work they do.

"They are really part of the growth of our business and they are a part of everything that we do and we have their full support."