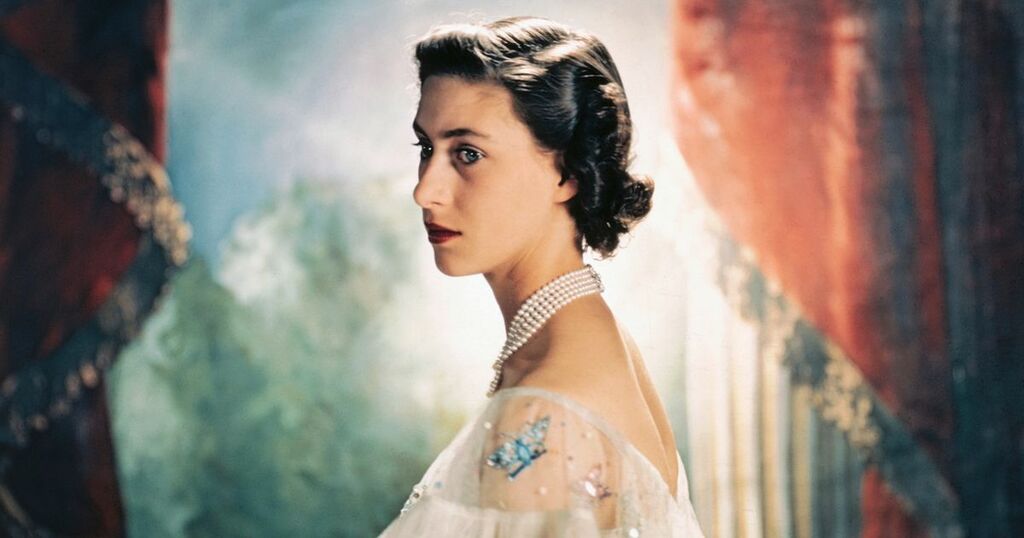 It is around her left arm as she is captured from the side in a white tulle embroidered dress against a landscape backdrop.

Beaton recalled in his diary being taken aback by Margaret’s beauty and ‘piercing blue eyes’.

He said she was very engaging with him despite having been out till 5.30am partying in a London nightclub the previous day.

It was at about 1949 when Margaret was said to have fallen for by Group Captain Peter Townsend who was quarry to her father, King George VI.

The pair are believed to have entered into a relationship two years later, a storyline which featured prominently in the first series of Netflix drama The Crown.

The bracelet, which comes in a Cartier case and may have been made by the Paris jeweller, has a double row of cultured pearls bordering a line of circular-cut diamonds.

It first emerged from the Countess of Snowdon collection 15 years ago and was today sold by a private collector with London-based auctioneers Dix Noonan Webb.

It was estimated at £40,000 but hammered down at £320,000 after a fiercely contested bidding battle. Auctioneers Dix Noonan Webb have revealed the bracelet sold for £396,800 including fees this afternoon.

“The princess was wearing this bracelet in the iconic portrait photograph taken on her 19th birthday by the Royal photographer, Cecil Beaton, at Buckingham Palace.

“It is a very personal piece of Royal history with an impeccable provenance.”

Mr Beaton took six portraits of Margaret over a period of years before her marriage to Antony Armstrong-Jones, the 1st Earl of Snowdon, in 1960.

The 1949 photo was taken while she was still 18-year-old and was published on August 21 of that year, her 19th birthday.

Beaton wrote in his diary: “She was at Lords for the Eton and Harrow match, and got back a bit late but she is such a quick dresser that a few moments after her return she appeared changed into the new evening dress Hartnell had supplied her that morning.

“It was a dull dress of white tulle embroidered with sequin butterflies and a rainbow tulle scarf around the waist.

“She looked very pretty and wore quite a lot of make-up - and the eyes are of a piercing blue - catlike and fierce and so very pristine and youthful.

“This is very exciting she said as she walked up the long red carpeted arcade towards the Chinese drawing room in which we had placed all our complicated apparatus.

“I trust I haven’t dragged you away from Lords - Oh it wasn’t a drag, she said.

“She had been up till 5.30 the night before (she likes the peace and anonymity of the 400 nightclub) and towards the end of the two hour sitting, started to wilt and became very tired.”

Earlier this week, the same auctioneers sold the war medals belonging to Peter Townsend for £260,000.

The World War Two hero pilot had hoped to marry Princess Margret but she reluctantly ended their romance after Royal pressure as they would not accept her marrying a divorced man.

Frances Noble, Head of the Jewellery Department and Associate Director at Dix Noonan Webb, said: "We are absolutely delighted with the price achieved today for the Art Deco bracelet formerly in the collection of HRH Princess Margaret, Countess of Snowdon.

"It not only reflects the strength of the current auction market but also the overriding importance of provenance.

"Princess Margaret was photographed wearing this bracelet on numerous occasions which certainly added to the appeal of the piece, attracting international interest and extremely competitive bidding - an exceptional result for the vendor."