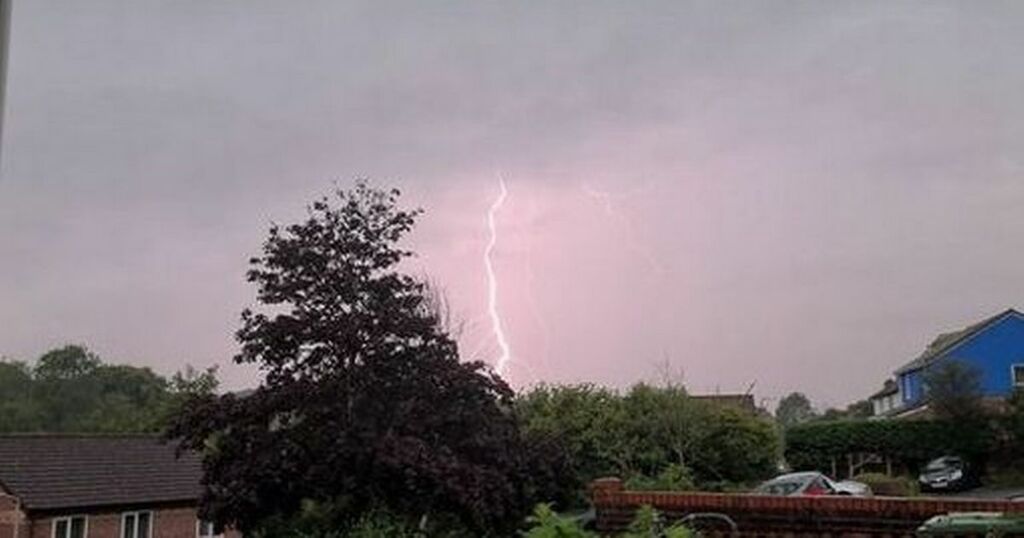 A primary school in Plymouth has been evacuated after being struck by a huge bolt of lightning as a wild thunderstorm sweeps in.

Children were evacuated after fire services were called to the scene after reports of the smell of burning.

A spokesperson for Devon and Somerset Fire and Rescue has confirmed that it is believed no-one is believed to have been injured.

The Met Office had issued Yellow warnings as the forecast thunderstorm swept into the southwest and began wreaking havoc.

Vast swathes of southwest England and Wales are on alert for the potential for two days of heavy downpours, flooding and lightning strikes as the band of rain moves in and begins tracking north.

Did you witness this incident? Email webnews@mirror.co.uk

A Devon and Somerset Fire Service spokesman told Plymouth Live: "We received the call at 9.57am and two crews initially attended."

Crews in attendance to make sure there are no signs of fire have since reportedly left the scene.

A witness said: "They were evacuated to the school playground and took shelter in the greenhouses… all are re-entering the building now and fire service is still on scene."

Thunder and lightning battered Plymouth on Wednesday morning as the storm front moved in.

The Met Office placed a yellow weather warning for thunderstorms across the majority of the South West of England, including the whole of Devon and parts of Cornwall, and southern Wales, including Cardiff.

The storm is due to move toward's the North and East of England from Thursday, as yellow warnings extended to vast swathes of Yorkshire, Greater Manchester, Newcastle, Lincolnshire, the West Midlands and Norfolk.

A large area of Northern Ireland has also been hit by storm warnings for Thursday as the wild weather moves north.

The national forecaster has warned the storm could bring flooding and travel chaos, as well as more lightning strikes and hail.

There is also a risk of power cuts as well as difficult driving conditions and road closures.

Two warnings have been issued, one for Wednesday from 11am until 9pm covering most of south west England and the south coast of Wales.

Another warning on Thursday covers Northern Ireland, Wales and most of northern and central England between 11am and 8pm.

The Met Office said many areas will avoid the worst of the showers, but "thundery downpours" could bring 30mm and 50mm of rainfall in less than three hours in some places.

The downpours will wash out the unseasonably summery conditions bathing much of the UK this week.

The mercury has been reaching highs close to 30C in some parts following a drab end to summer.

Much of the areas of England not affecting by the yellow warnings should remain bright and dry today before cooling off from Thursday and into the weekend, the Met Office has said.