He has run more than 12,000 miles, cycled over 14,000 miles, raised £1million for charity, dodged rattlesnakes, but getting his baby to sleep has been the toughest challenge yet.

Adventureman – aka Jamie McDonald, is known for his extreme fundraisers, which he completes in his famous superhero costume.

But the pandemic has not only made the runner sit still at his home in Gloucester, but Jamie also became a dad to baby daughter eight-month-old Storm.

“She is a storm all the way through the night, she is still not sleeping,” laughs Jamie. “It will be easier to run across a country than growing a little human. I am sleep-deprived.”

He adds: “I am always on the move, but suddenly the world just stopped. I actually enjoyed that time, lockdown was challenging but there was beauty that came out of it too.”

Jamie’s second book, Adventureman: Running America, is being released tomorrow, where he talks about his super heroic effort to run coast to coast across America in 2018/19.

He ran 5,500 miles, which is equivalent to 210 marathons, through 21 states, visiting 21 children’s hospitals, while wearing his iconic Adventureman costume.

Jamie, who is also a motivational speaker, has raised £200,000 for his charity, Superhero Foundation and children’s hospitals.

The foundation supports children and adults with disabilities that need treatments, therapies and equipment, which aren’t available through local healthcare.

Jamie, who suffers from a rare spinal condition called Syringomyelia, started his fundraising adventures in 2012 when he cycled 14,000 miles from Bangkok to Gloucester, using a second-hand bike he bought for just £50.

Weeks later after returning home, he became the Guinness World Record holder for Marathon Static Cycling, when he cycled for 12 days (268 hours) raising over £20,000 from both challenges.

In February 2014, Jamie became the first person in history to run 5,000 miles (200 marathons) across Canada from the Atlantic coast to the Pacific coast without the aid of a support crew.

Throughout the journey, which started in 2013, he wore his Flash superhero costume, and raised £250,000.

His journey was captured in his first book, Adventureman: Anyone Can Be a Superhero.

To date Jamie, 34, has raised £1million for his foundation and children’s hospitals across the UK, America and Canada.

He has now made it his “life mission to give back to the hospitals” that helped him with his condition.

At the age of seven, Jamie struggled to move his legs, used a wheelchair and had eplicatic fits, but despite being told he may never walk, Jamie defied all odds. He also has dyslexia.

Jamie says: “The book is about my continued journey following on from my adventure in Canada, which is covered in the first book. After this I set up Superhero Foundation, I got itchy feet, maybe I am just an adventurer at heart.

“It was time to almost carry on and continue the journey from where I have left off in Canada.”

Jamie says one of the most “tiring spots” was passing through Arizona, on his way to a children’s hospital in Texas, where temperatures soared to 60C.

He adds: “I started doing my runs at night, but it would still be 45C, it was brutal but the sun was not out at least. I ran through the night, I barely saw daylight for three months.

“There were rattlesnakes coming out, they love the warm tarmac and they gravitate towards it, so I was constantly dodging rattlesnakes."

Although Jamie didn’t come face to face with the mountain lion, he soon met unfriendly visitors when hundreds of tarantulas came towards him.

Jamie adds: “That particular night was the most bizarrest night and the scariest night of my life. I spotted something on the side of the road, shone my headlight as I went over and suddenly it was a tarantula.

“Forget about the mountain lions, I am petrified of tarantulas. I scream my head off in the bathroom here if there is a spider.

“I went to video it, to show everyone there is a tarantula in the desert, when it sensed my vibration and it ran towards me so I sprinted off but then I saw another one and another one and suddenly there were hundreds.”

And if that wasn’t enough, just weeks later after returning back on home soil, Jamie broke a Guinness World Record again, for the greatest distance covered on a treadmill in one week.

He ran 524 miles on the treadmill, which is equivalent to 20 marathons, in just seven days, surviving on just three hours sleep. Jamie raised £61,000 for the Superhero Foundation.

Jamie says: “The treadmill challenge was a whole other world. You are just on this train of mission and you have just got to keep going. At this point I had just raised over £200,000 from my American adventure, but I thought let's just keep it going.

“I hit a point at 24 hrs on day three, when I said to myself I am giving up, but I kept going after words of encouragement from my dad.

“When I made it to 400 miles, the most bizarre thing happened. I started to see colours, purple, red, orange, yellow, it took over my vision, I started to freak out but weirdly I was running the best I have ever ran in the whole seven days.

“When I completed it I was a mess, I couldn’t walk, my subconscious let go, my body just went, they were even stuffing chocolate in my mouth to keep me going.”

Just 12 hours later, Jamie, who is a Pride of Britain 2019 winner, was admitted into hospital after struggling to breath. He also lost half of his red blood cell count.

He says: “It’s like I have come back full circle, because my wife Anna and I have recently bought our own home. Nine years ago I had saved £20,000 and I was on my way to sign the papers, when I had this gut feeling.

“I had to listen to it, I pulled out of the house deal because I thought there has got to be more to life than this.

“I paid a visit to the Children’s Centre at Gloucestershire Hospital and once I left there I bought a bike for £50 out of the newspaper and cycled from Bangkok to Gloucester and that was the start of the journey.”

Adventureman: Running America is out tomorrow, and can be purchased from all major bookstores or Amazon. 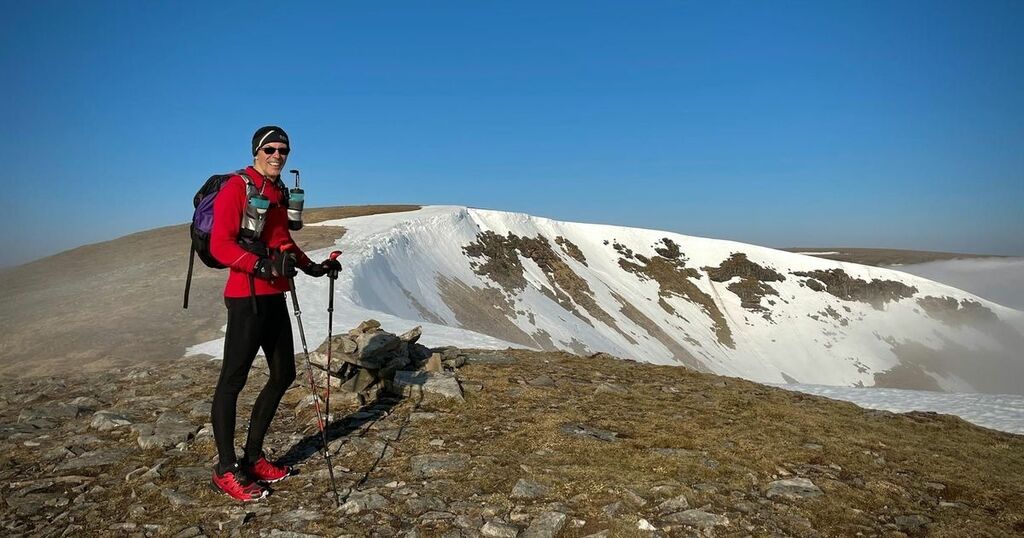 Adventurer takes on Romanian ultra race challenge for Maggie's Lanarkshire
Derek Stewart is taking on the challenge to add to the total of £75,000 which he has already raised for…

Daily Record
One subscription that gives you access to news from hundreds of sites
Statement of intent: boy raises £640k with 500-night camp out

Max Woosey, 11, hoped to secure £100 for a Devon hospice but his charity pitch became a marathon

Ultramarathoner Dean Karnazes is used to running alone but when the coronavirus pandemic hit, he felt lonely. Now he's part…

As the annual fundraiser celebrates its 10th anniversary this year with the 10xChallenge, the telly anchor knows exactly how she…