Preserving the art of wooden barrels

There is growing interest in kioke, wooden barrels that are used to make soy sauce and sake.

Efforts are underway to convey their appeal and pass on traditional manufacturing methods, including a summit on the culture of fermentation using kioke barrels in Shodoshima, Kagawa Prefecture. In late January, food industry officials, consumers and others from Japan and abroad gathered at Yamaroku Shoyu, a soy sauce maker in Shodoshima, to assemble kioke barrels.

The number of manufacturers that use kioke is steadily decreasing. Currently less than 1 percent of soy sauce on the market is made this way. This has been accompanied by a decline in the production of wooden tubs for fermentation.

Yasuo Yamamoto, 47, the fifth generation of his family to run Yamaroku Shoyu, launched a project to revive kioke craftspeople in 2012 out of concern that "if things continue how they are, traditional Japanese culture will become extinct."

Every January, industry officials and others gather to practice their barrel-making techniques. Newly finished barrels are used by Yamaroku and other brewers around the country.

This year was the first time a "summit" was held as part of the project. Over two days, brewers, chefs and others exchanged opinions on topics like taste and how techniques should be passed down.

At the summit, "fermentation designer" Hiraku Ogura told the participants: "[Soy sauce] made in kioke barrels expresses the individuality of the land and the brewery. Products of average taste that meet certain standards have become widespread. A time is coming when more emphasis will be given to individuality."

"If our market grew from 1 percent to 2 percent, it would create new demand for kioke. We want to preserve the traditional Japanese culture of fermented food for the next generation," Yamamoto said.

The project plans to hold its next summit on April 4 at Shibuya Hikarie in Tokyo.

There are efforts to connect kioke with regional development in areas affected by the Great East Japan Earthquake. In January, Oota Yohachiro Shoten, which makes soy sauce and miso in Shiogama, Miyagi Prefecture, used crowdfunding to raise some of the funds it needed to buy new kioke barrels to replace ones destroyed in the earthquake.

The company wants people to enjoy sashimi and sushi with local soy sauce in Shiogama, which markets itself as an "epicurean town." The plan is to present soy sauce made in kioke at a national soy sauce summit to be held in the city on Nov. 20-21.

Kioke are also a topic of interest in the sake industry. Aramasa Co., a brewery based in Akita, is trying to manufacture kioke out of Akita cedar.

Aramasa President Yusuke Sato wants to make all his sake in kioke barrels. He is even having employees learn how to make them.

"If there are no more kioke makers left, we'll have to make them ourselves," he said.

Niida-Honke Inc. in Koriyama, Fukushima Prefecture, wants to make kioke out of cedar from a grove owned by the company.

"Apart from the pottery and earthenware culture of China and the Korean Peninsula, Japan has a kioke culture supported by woodworking techniques. Maintaining fermentation culture using kioke barrels is an incredibly meaningful way of expressing Japan's uniqueness and local characteristics. I hope consumers will get to know Japan's unique food and the value it has," said Nami Fukutome, an associate professor at Tokyo Seiei College who studies food culture. 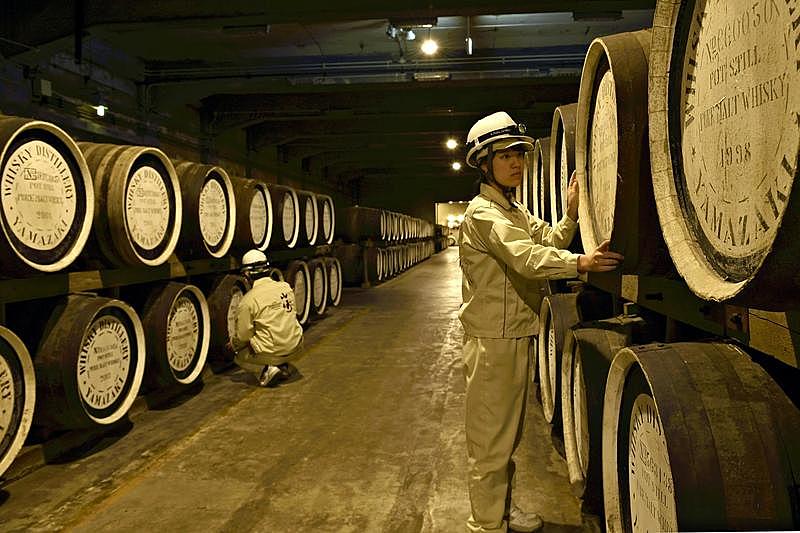 Osaka: Japanese whiskies have world raising a glass
As a local train travels near Tennozan, a mountain that straddles Kyoto and Osaka prefectures, passengers can catch sight of…

The Japan News/Yomiuri
One subscription that gives you access to news from hundreds of sites
The World’s Only Michelin-Starred Ramen Eatery, Tsuta, Has A New US Outpost

Miso, mirin, amazake and many other are selling online and offline in India’s increasingly health-conscious cities, and due to their…