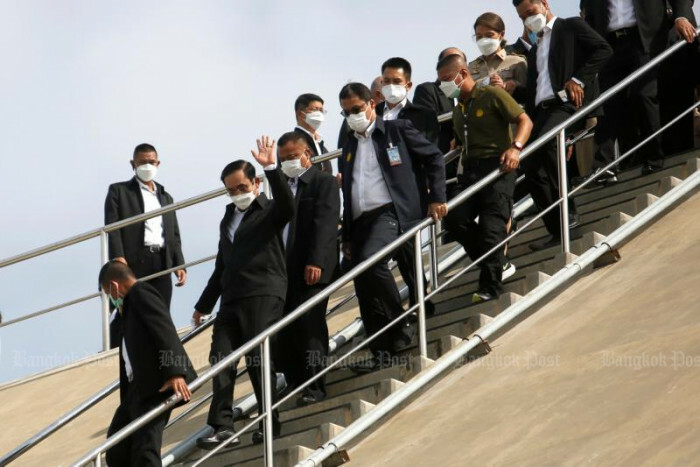 Prime Minister Prayut Chan-o-cha has affirmed there will be no cabinet reshuffle in the near future despite the removal of two deputy ministers last week.

Speaking to reporters on Sunday, the premier said the respective ministries had the situation covered. Other deputies or even ministers can take over the responsibilities of the deputy ministers who were removed, he said.

Capt Thamanat Prompow, PPRP secretary-general, was sacked as deputy agriculture minister and Narumon Pinyosinwat removed as deputy labour minister last week over a fallout with the prime minister during the censure debate early this month.

The move came after an alleged plot to topple Gen Prayut by amassing no-confidence votes against him in the no-confidence debate. "There's no need to bring in replacements at this time. Caretakers will fill in," Gen Prayut said.

He pledged to be more approachable for ruling Palang Pracharat Party (PPRP) MPs but denied Deputy Prime Minister Prawit Wongsuwon has considered resigning as the PPRP leader over the Thamanat-Narumon fiasco. Gen Prayut and Gen Prawit are bound by strong fraternal ties. He added the ruling party enjoys solid unity.

Meanwhile, government spokesman Thanakorn Wangboonkongchana said yesterday the government has no reason to dissolve the House of Representatives and will serve out its full term.

Most MPs were adamant in backing Gen Prayut as prime minister, he said, adding the censure debate has caused no harm to the government.

Gen Prayut attaches priority to dealing with critical problems, particularly the Covid-19 pandemic and reviving the economy, he said.

The immediate tasks include containing the virus and expediting vaccinations so the country can reopen quickly.

"If the House was dissolved now, these crucial tasks would hit a snag. A House dissolution not only prevents the situation from improving, but worsens it," the spokesman said.

The coalition parties stand united. They may experience some hiccups in working together but the problems are reconcilable, Mr Thanakorn added.

Pheu Thai Party deputy leader Yutthapong Charasathien said the party believed the House will be dissolved next year ahead of the government's full term in March 2023.

In the meantime, Mr Yutthapong said Pheu Thai planned to propose a rewrite of the organic law on elections after the House reconvenes on Nov 1.

The rewrite is to be made in tandem with the parliament-approved charter amendment switching the current single-ballot election method to a dual-ballot system.

Mr Yutthapong said the government will not be able to stay on for long because it was close to "maxing out" its capacity to borrow money needed to solve problems, most notably the Covid-19 crisis.

The government has taken out loans worth a combined 1.5 trillion baht largely to finance the budget-intensive Covid-19 relief programmes.

Politically, the government is likely to lose its parliamentary majority without the support of some 40 PPRP MPs in the wake of Capt Thamanat's removal as deputy agriculture minister.

Some believe he will leave the PPRP with the 40 MPs under his faction.

Mr Yutthapong said that if and when the amended organic law is passed, it should set in motion the process of the next election.