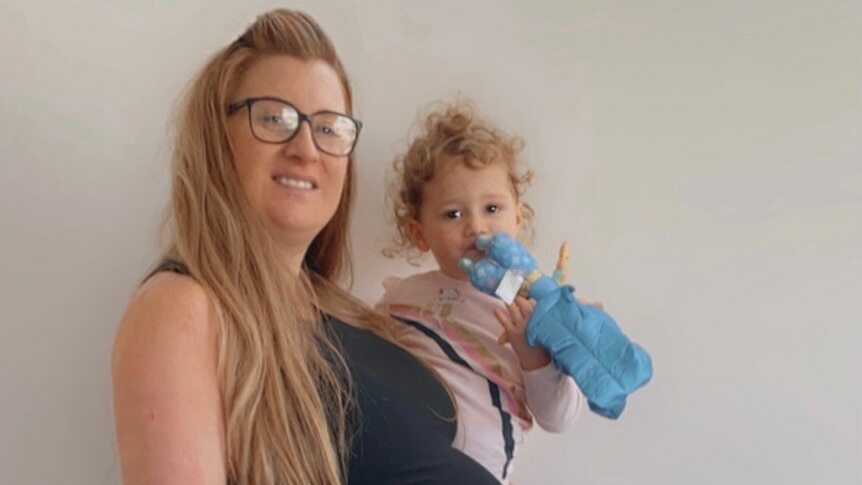 Jessica Duncan is due to give birth in three weeks and is terrified to go to hospital.

The 37-year-old, from Emu Plains in Sydney's west, has listened to the medical advice and tried to get vaccinated against COVID-19, but feels the system has let her down.

"I feel helpless," she said.

Her obstetrician wrote a letter to try to have the appointment brought forward, but the answer was still no.

"[My obstetrician] doesn't have any push, apart from being able to write a referral to state that I am [at] higher risk … I may as well rip that up because I don't have anybody to give that to," she said.

Her partner has received both doses of the AstraZeneca vaccine but they are worried he could still catch COVID-19 as he travels to Sydney's south-west for work.

"He's got to come home to his family every day, to a wife that's not fully vaccinated."

After being told the clinic would not move her appointment, Jessica spent hours trying to find a GP that would give her a second dose.

She found one, only to then have it cancel, but has now found another GP surgery with an appointment just days before her baby is due.

Despite repeated and desperate pleas, pregnant women are still finding it difficult to book COVID-19 vaccine appointments and are now getting even more conflicting advice about what to do.

The peak body representing obstetricians and gynaecologists has now joined calls for governments at all levels to address inconsistencies, warning more pregnant women could end up in hospital.

Pregnant women were added to the vaccine priority list in July because they are at greater risk of severe illness if they contract COVID-19. And health authorities recommended they receive the Pfizer vaccine.

But in an unexpected shift, NSW Health has now suggested pregnant women should consider an AstraZeneca shot if they cannot access the Pfizer vaccine.

It comes after a botched start to the vaccine rollout for pregnant women, which included not being able to book through the national eligibility checker and not being considered a priority in states such as Queensland.

More than a month after they were added to the priority list, some women are still struggling to book an appointment before their due date, while other cohorts, such as year 12 students, are prioritised.

Fears more women could end up in hospital

While supply is one issue, access to a Pfizer vaccination booking is dependent on where a woman lives and who they book their appointment through.

In some states, there is no process in place that allows pregnant women to move to the front of the queue.

In the ACT, pregnant women can call a hotline to get a priority appointment. A similar system has been set up in Victoria for year 12 students, but not pregnant women.

Federal health authorities are confident that within weeks supply will not be an issue as additional Pfizer doses will arrive from the United Kingdom.

But head of the Royal Australian and New Zealand College of Obstetricians and Gynaecologists (RANZCOG), Vijay Roach, said women could not wait.

"The problem at the moment is that access is intermittent," he told the ABC.

"It's haphazard. I don't have a sense that there is a robust system in place and that makes it confusing for pregnant women."

Dr Roach said it was important the problem was addressed.

"We are frustrated women are still having difficulty accessing the vaccination in a timely manner. Pregnancy just doesn't wait," he said.

Dr Roach said there would be consequences if pregnant women did not get vaccinated in a timely manner.

Further confusing the situation, NSW Health has now suggested that pregnant women should consider getting the AstraZeneca vaccine.

"If access to the Pfizer vaccine is limited, pregnant women may consider receiving the AstraZeneca vaccine and should speak with their general practitioner or relevant health professional about the best choice for them," a spokeswoman said in a statement to the ABC.

The new advice contradicts what was issued by RANZCOG and the nation's vaccine advisory body, the Australian Technical Advisory Group on Immunisation (ATAGI).

Dr Roach said conflicting statements could cause confusion and he encouraged anyone who was pregnant to follow the advice issued in June.

"The advice given by RANZCOG and ATAGI is very clear … mRNA vaccines, Pfizer or Moderna, are the recommended vaccines in pregnancy," he said.

"I think it's been very difficult to have a single voice of truth during the pandemic, but RANZCOG and ATAGI combined with one another and consulted the governments in both Australia and New Zealand in order to come up with our advice.

"Our advice is robust, it's evidence based and I think it's the correct advice.

In the United Kingdom, where the AstraZeneca shot has been used widely, the government vaccine advisory body there states the Pfizer and Moderna jabs are the preferred vaccines for pregnant women.

The danger posed to pregnant women who contracted COVID-19 was laid bare last month when a pregnant woman was admitted to ICU at Newcastle Hospital with the disease.

The ABC understands she had tried to book a vaccine appointment but was unable to get one.

Several other women in the region then contacted local federal MP Sharon Claydon who raised the issue with Health Minister Greg Hunt in Question Time.

As a result, nine women in the area have now secured bookings.

Australian College of Midwives president Joanne Gray said women should not have to spend weeks searching for a vaccine appointment and she suggested governments look at where else doses could be administered.

"Is it possible for them to be getting the vaccine when they go to their obstetricians?" she said.

She also suggested midwives be added to the list of health practitioners who could administer COVID-19 vaccines across major maternity units.

"There could be systems that are set up through antenatal clinics, for example, in our large maternity units so that women can go at particular times and have access to the vaccination," she said.