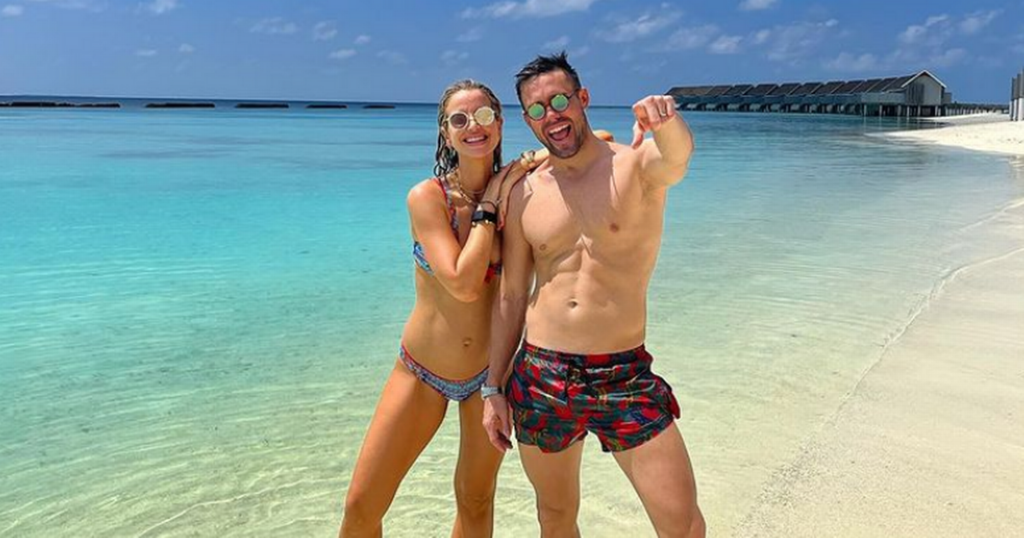 Vogue Williams and husband Spencer Matthews have jetted off to the Maldives for a lavish holiday in ‘paradise’ before the arrival of their third child.

But Vogue revealed she has been put on a strict 'sex ban' by her doctor whilst she is away.

The Dublin DJ and presenter, who is due to give birth in April said: "Well, I went to the doctor the other day and I'm on a sex ban while I go to the Maldives."

Speaking on her podcast My Therapist Ghosted Me with fellow Dubliner and best pal Joanne, she explained: "I'm lying there with a probe in me and the doctor says, 'You can't have sex for two weeks until you get back, so I can keep an eye on it'."

Laughing off her husband's shock and horror at the doctor's orders, she said: "And Spencer's face, he was like, 'Excuse me, what, Dr Vasso?'

"We were looking at my cervix and every time I laughed, which was constantly, because he kept going on about it, it was becoming more open and more open, which is the problem."

"And she was like 'you can't have sex for two weeks'."

Vogue went on: "So basically my cervix is a little bit open so I have to be careful.

It comes as the TV presenter and her former Made In Chelsea star hubby seem to be trying to make the most of their final few weeks as a family of four, with a luxurious trip away to Kuramathi Island.

The couple flew off with their son Theodore, three, and 18-month-old daughter Gigi and other family members this week, and have been sharing snaps on social media since.

Vogue said the ‘long trip’ was worth it, as she shared an image of her son Theordore beaming from ear to ear on a boat trip.

She added: “Officially in paradise.”

Posing in swimwear alongside Spencer on a picturesque beach in another snap, the 36-year-old radio and TV star poked fun at her husband, whilst plugging her self tanning brand, saying: “Someone forgot to @barebyvogue before we left”

The Howth native went on to stun in a red dress as she posed in front of a scenic sunset in more images.

“This place is just breathtaking," she said.

"I’ve always admired it from other peoples pictures, we finally made it ourselves!”

Vogue’s sister Amber and friends have also been posting snaps of the stunning location on the trip.