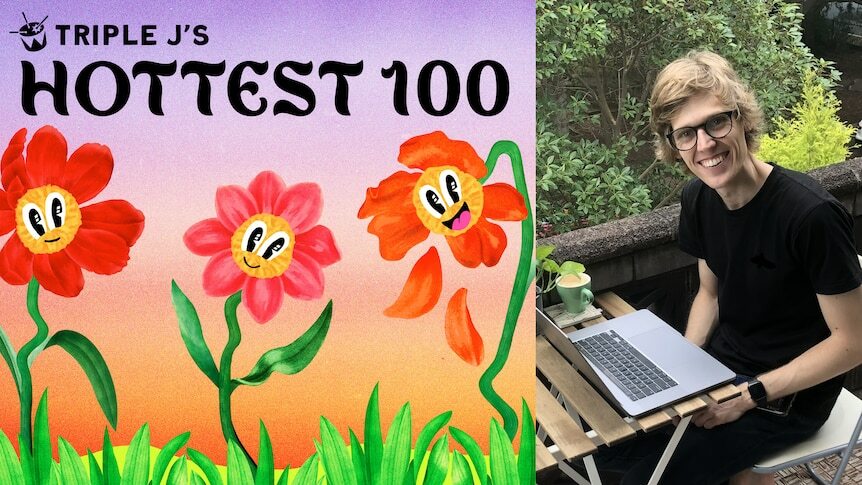 A software engineer whose computer algorithm predicts which songs will make triple j's annual Hottest 100 countdown says this year's predictions will be largely accurate, despite some challenges.

Sydneysider Nick Whyte is in the seventh year of the project, which he calls 100 Warm Tunas – a fishy pun on the word tune.

The 26-year-old says he has declined offers from people wanting to buy the project or purchase advertising space on his website, and has knocked back a sponsorship offer from a gambling company.

He says 100 Warm Tunas actually runs at a small loss due to website and computing costs, but he doesn't do it for money – it's a passion project.

It's not hard to see why there were financial offers on the table. Each year for the past six years, Mr Whyte's algorithm has managed to predict around eight of the top 10 songs on the countdown, and has successfully predicted the number one song 67 per cent of the time.

The first iteration of 100 Warm Tunas was conducted privately in early 2016, for the Hottest 100 of 2015. It successfully predicted the top three songs in the correct order, and correctly guessed eight of the songs which featured somewhere in the top 10.

This was after Mr Whyte noticed a triple j presenter had shared an image of their Hottest 100 votes on Instagram, using the hashtag #hottest100.

Mr Whyte says he realised he could click on the hashtag to see images other people had shared, and he soon developed an algorithm which scanned and recorded these votes.

"It's not about predicting number one for me. It's about seeing how far I can take the problem-solving process of the project."

So how does the algorithm work?

The 100 Warm Tunas algorithm analyses screenshots of Hottest 100 votes posted by people using the hashtag #hottest100 on public Instagram and Twitter accounts, as well as from a particular thread on Reddit.

People can also send their votes via direct message to 100 Warm Tunas on Instagram.

The algorithm scans the votes and adds them to its leaderboards of the top 100 and top 200 songs, which are then updated on the 100 Warm Tunas website.

Which songs are predicted to do well this year?

At the time of writing, 100 Warm Tunas predicts the top 10 will include songs by the likes of Sydney rockers Gang of Youths, American rapper Doja Cat and electronic group RÜFÜS DU SOL, as well as the song Stay by Australia's The Kid LAROI with Canada's Justin Bieber.

"There is still often an element of surprise when it comes to the countdown on the day. The songs will shuffle around a fair bit," Mr Whyte explained.

The obvious outlier in the predicted top 10, though, is a performance by Australian children's entertainment icons The Wiggles, sitting in first place on 100 Warm Tunas at the time of writing.

Yep – The Wiggles' cover of Tame Impala song Elephant, recorded for Like A Version in March last year, is expected to at least make the top 10.

The performance has more than 3 million views on YouTube, and inspired a campaign by an anonymous Twitter account which has been tweeting daily to encourage people to vote for the song.

It even gained The Wiggles' attention.

Hottest 100 expert Patrick Avenell has been interviewed on triple j about the countdown in previous years, and says while he doesn't expect The Wiggles' cover to win, it could beat the original Tame Impala version of Elephant, which came in at number seven on the Hottest 100 of 2012.

The Wiggles have never had a song on the Hottest 100, but Mr Avenell says that will likely change this year, and he hopes it will bring some lightheartedness to the countdown.

"While it's not technically a novelty song, it's about as close to a novelty song as we can get in the Hottest 100, which I think is good."

The highest spot achieved by a Like A Version cover is Denzel Curry's version of Rage Against The Machine song Bulls On Parade from 2019, which reached number five.

Mr Avenell expects the Hottest 100 of 2021 to feature a larger and more diverse pool of artists.

He also believes the countdown will likely break the record for the highest number of Australian acts in a Hottest 100, which stands at 66 acts recorded in both the 2020 and 2016 countdowns.

"There are a couple of big international stars like Billie Eilish and Olivia Rodrigo who had popular records in 2021, but I think the top of the chart especially is going to be absolutely stacked with Australian artists."

More artists are expected to be represented than ever before, while a high representation of female solo acts is also predicted.

This is due to what Mr Avenell says is "an astronomical increase" in the number of female solo acts having their albums become triple j's weekly feature album in recent years, and therefore enjoying more radio play.

How accurate will 100 Warm Tunas be this year?

Mr Whyte says he expects this year's 100 Warm Tunas predictions to be as accurate as previous countdowns, despite fewer people posting their votes publicly on social media in recent years.

More than 14,000 votes had been collected at the time of writing, on track with previous countdowns.

"So far, we've been collecting data at a similar rate seen in the Hottest 100 of 2020, so expect we will see about a 1 per cent sample of the total voting population by Hottest 100 day."

Does predicting things spoil the countdown?

Mr Whyte says he is aware that some people don't want to know which songs are predicted to be in the Hottest 100, and that everyone has the right to avoid potential spoilers.

"It's a personal choice as to whether an individual feels the need to access my website, so if you don't want spoilers then it's a matter of waiting for Hottest 100 day," he said.

"I love listening to the countdown on the day, matching up how far off 100 Warm Tunas is compared to the songs which play on the day.

The countdown takes place from 12pm AEDT on Saturday January 22.