Post-Roe, IVF treatment may be impeded

Anti-abortion advocates justify abortion bans by saying they're protecting life. Yet, in the likely event Roe v. Wade is overturned, it could affect one of the key procedures that helps families build a family and create life: in vitro fertilization (IVF).

A common procedure for families who have trouble conceiving, IVF involves fertilizing a human egg cell outside of the human body, then re-implanting it in one's uterus and carrying it to term. IVF is a common procedure, and it is estimated that from 1987 to 2015, 1 million babies were born through IVF in the United States.

"There are a lot of different ways that these anti-abortion statutes and trigger laws could impact people that actually want a child through IVF," Seema Mohapatra, a health law and bioethics expert at Southern Methodist University, told Salon. "In these really expansive definitions by states that are going to give fetal personhood to these embryos, there is a question about what you can do with them and whether destroying them is considered either a civil or even criminal penalty."

In light of news about the leaked SCOTUS opinion, attention is fixating on an estimated 13 states that have "trigger laws," meaning laws which would make abortion immediately illegal once Roe v. Wade is overturned. While the details of the trigger law abortion bans vary from state to state — details that generally regard exceptions like rape, incest, or preventing an injury or death of a pregnant person — abortion access in these states will become more difficult. And since the language of some trigger laws gives "personhood" to a fertilized egg, that could put some parts of the IVF process in a legal gray zone, potentially criminalizing those who seek IVF or those who perform it.

"In these really expansive definitions by states that are going to give fetal personhood to these embryos, there is a question about what you can do with them and whether destroying them is considered either a civil or even criminal penalty."

As such, fertility experts are unsure what the future will hold for IVF treatments.

"I am concerned about many reproductive rights being impacted if Roe V Wade is overturned," Dr. Lora Shahine, a reproductive endocrinologist at Pacific NW Fertility in Seattle and host of the Baby or Bust podcast, told Salon via email. "Although these laws may be intended to restrict termination of a pregnancy for certain reasons, this language could also be used to limit access to some birth control methods and access to in vitro fertilization (or assisted reproduction)."

The medical process of IVF has a few steps, and begins with removing eggs from a woman's ovary. Each egg is fertilized by injecting a sperm into the egg, or mixing it with the egg in a petri dish. This fertilized egg is then transferred back to the uterus with the hope of creating a viable pregnancy. During this process, it is common for multiple eggs to be transferred or harvested and fertilized — but not all turn into viable pregnancies, for a variety of reasons. People then usually have a few options for their fertilized eggs: to discard them, donate them to research, donate them to another couple, or keep them for a future pregnancy.

In an article written by Neelam Patel for The Georgetown Journal of Gender and the Law, Patel brings to light that a potential impact of these trigger bans on IVF could mean that any destroyed embryos could be defined as abortions.

"The distinguishing feature of these trigger bans is that they all ultimately define the beginning of pregnancy as the moment of fertilization," Neelam Patel wrote. Patel pointed to the Arkansas trigger ban which defines an "abortion" as "the act of using, prescribing, administering, procuring, or selling of any instrument, medicine, drug, or any other substance, device, or means with the purpose to terminate the pregnancy of a woman." In the same statute, "unborn child" is defined as "an individual organism of the species homo sapiens from fertilization until live birth." When this is the case, Patel explains that "the entire practice of in vitro fertilization could be seen as destroying 'babies' and thereby causing 'abortions' because there is always the significant possibility that all the embryos will not survive."

This is essentially what is happening in Louisiana right now. Last week, lawmakers advanced a bill called HB813 that would classify abortions as homicide and defines a "person" as existing the moment an egg is fertilized. If passed, many fear this would inadvertently criminalize IVF treatments, as reported by The Hill.

Since the passage of an anti-abortion law in Texas in 2021, Senate Bill 8, selective reductions in the IVF process have stopped. Selective reductions occur when one or more embryos are removed from the womb of the pregnant person because of a health risk to them or the fetus.

"This bill would give those cells personhood," Sarah Omojola, a New Orleans attorney, told The Hill. "Such that anything that happens to them after could give rise to criminal prosecution. This criminalizes IVF."

IVF is a common treatment for infertility, and is an option for many women who can't conceive because of a blocked or damaged fallopian tube; infertility affects at least 10-15 percent of couples who want to get pregnant. It's also often used as a means to have children for people who are in same-sex relationships.

As Mohapatra explained to Salon, since the passage of an anti-abortion law in Texas in 2021, Senate Bill 8, which prohibited abortions as early as six week of pregnancy, selective reductions in the IVF process have stopped. Selective reductions occur when one or more embryos are removed from the womb of the pregnant person because of a health risk to them or the fetus.

Mohapatra said depending on the state, selective reduction can definitely fall under the "definition of abortion," like it does in Texas.

Dr. Marcelle Cedars, president of the American Society for Reproductive Medicine (ASRM), issued a statement following the news of the leaked SCOTUS opinion voicing concerns about the effects of the trigger laws.

"Moreover, while the immediate target of these restrictions is abortion care, there is a clear and present danger that measures designed to restrict abortion could end up also curtailing access to the family building treatments upon which our infertility patients rely to build their families," Cedars said. "In other words: not only does this draft decision threaten the health of pregnant people, it may also lead to fewer healthy babies being born to loving parents."

So, what to do if you live in a state with trigger laws and plan to seek IVF?

"Although no laws are explicated in place to limit use or IVF or change practice, this is the time to act in order to not let it happen," Shahine said. "Do not be reactive to limitations at stake — reach out to your local, state, and national representatives to let them know how you feel about what's happening."

Read more on the Supreme Court leak and the end of Roe v. Wade: 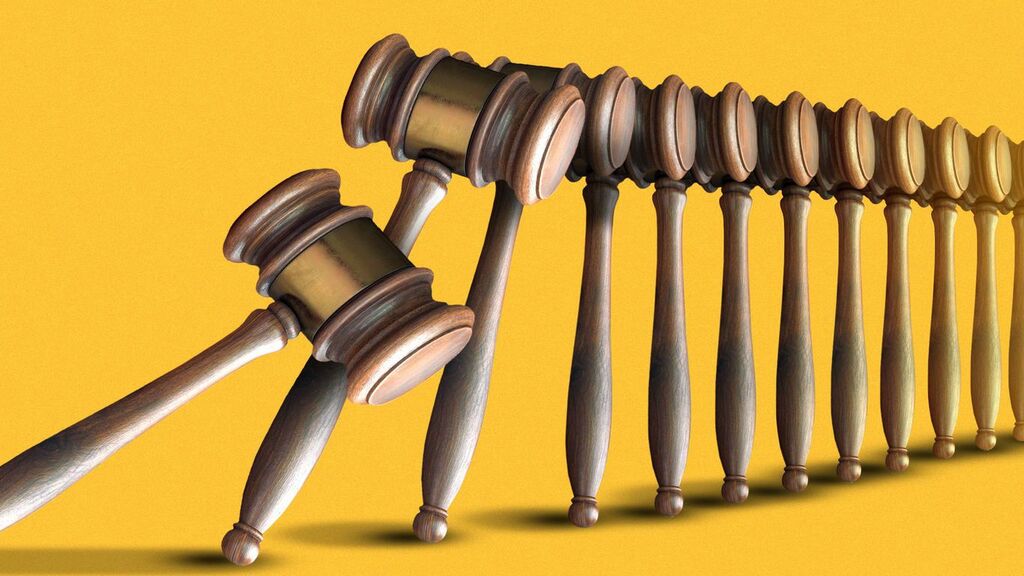