Positivity rate touches a record high of 37 per cent 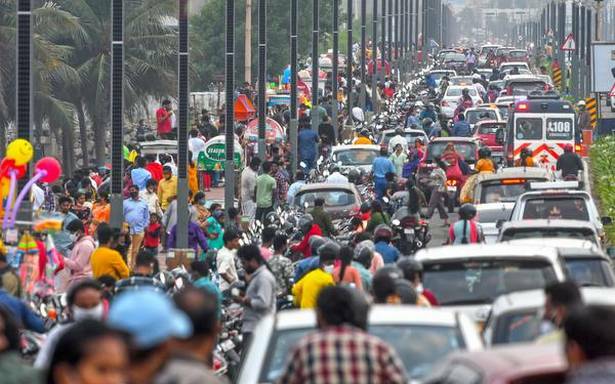 The COVID-19 third wave appears to be hitting Visakhapatnam district hard, as within a span of about 16 days the positivity rate has gone up from below 1% to 37.65%.

The number of positive cases recorded on Friday was 992 and on Saturday morning it was 1,103. This has taken the total cases to around 1.64 lakh in the district since the outbreak of the pandemic in March 2020.

On the brighter side, there have been on deaths in the last two days, keeping the count at 1,112 and the rate of hospitalisation continues to be on the lower side.

According to the predictions, the cases in the State would hover around 40,000 to 50,000 by the end of January, and are likely to see a drop in February, where we can except around 20,000 cases in the first two weeks and slowly it would tapper down by March, said a senior doctor from the CSR COVID block of King George Hospital (KGH).

But for a change, Visakhapatnam, that normally stood in the fourth or fifth position in the earlier two waves, is now in the second place after Chittoor. Fortunately, the death and severity is on the lower side, said Director of Visakha Institute of Medical Sciences (VIMS) K. Rambabu.

We have around 600 beds, including 200 ICU beds and 400 oxygenated beds. And so far, we have no admissions, as on date. We are treating people affected by the virus and putting them on home isolation, by giving the home isolation kits. But we are ready for the eventualities with around 247 ventilators, 40 oxygen concentrators, one 30 kl LMO tank, 2 PSA (Pressure swing adsorption) plants and at least 3 D-Type cylinders, said Dr. Rambabu.

Acquiescing with Dr. Rambabu, Dr. Vijay Sekhar, neurosurgeon from KGH, said, “Though the active cases have gone up from 121 on December 27 to over 4,600 as on date, the number of admissions is on the lower side, compared to the second wave, which was a nightmare for us, as we had a huge bed shortage.”

It is learnt that the admission into the CSR block, as on Saturday was around 114 with about 73 in the ICU. Most of the ICU patients were the ones suffering from severe and chronic co-morbidities.

But the cause of concern for the medical fraternity is the rapidity in the spread of the third wave. Now not only trauma care patients who are being admitted are turning positive, but also the staff, including nurses, paramedics and PG residential doctors are turning positive. We are advising at least one week home isolation for the staff, said a HoD in KGH.

Unlike in the first two waves, where the Health Department was sure of the variant prevalence, the positivity in the third wave is a mix of both the Delta and Omicron variant.

It appears that most of the positive cases continue to be affected by the Delta variant, there are also a number of Omicron cases. But fortunately, vaccination had been the saving grace. Since most of the population had received the jabs, the severity had been grossly reduced, said former principal of Andhra Medical College, Dr. P.V. Sudhakar.