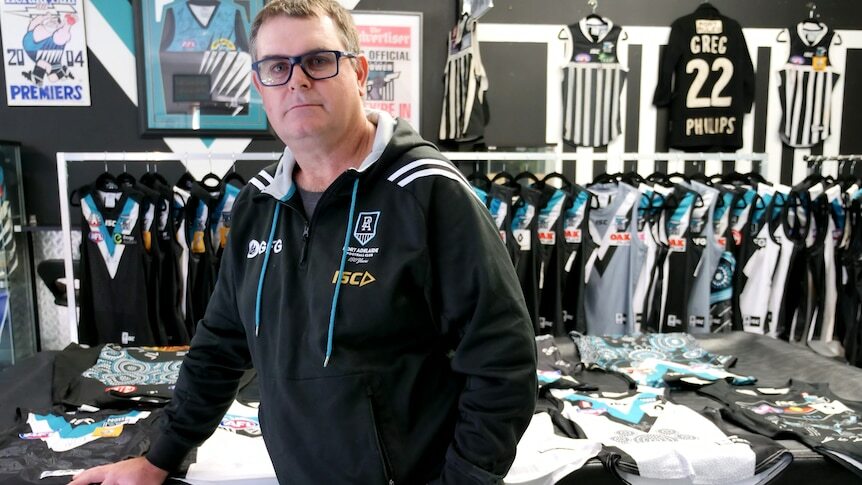 Some people collect stamps, others coins. For Anthony Lynch, it's football guernseys.

His Port Power man cave is home to a collection of guernseys and comes complete with LED lights, perspex Power signs and a handmade Port Adelaide bar.

As Port prepares for Saturday's preliminary final against the Western Bulldogs, Mr Lynch casts his eyes across a wall of jumpers and reckons it's the biggest collection of Port Adelaide guernseys in the world.

Each number tells a story, and each guernsey — 120 of them match-worn — is a highly coveted piece.

"The hobby has really taken off in the last three or four years.

"I think that it's down to … social media [and] the advent of buy-swap-sell pages and people seeing other people's collections and thinking, 'That is really cool, I would like to get involved'."

Mr Lynch said he owned every style of guernsey Port had worn in the AFL.

"It's taken six or seven years, but I've got them all."

It's a hobby that can sometimes break the bank.

His wife, Kirby, keeps track of all the buys, swaps and sells on a spreadsheet.

She said she had come around to the hobby, but it took some convincing.

"A few more years into it, the price of the guernseys started to get a lot larger than they were when they first started.

But she wasn't done, and neither was Mr Lynch.

The Lynches have travelled abroad in their support for the Power — to China and back for the AFL matches played in the hopes of broadening the Australian sport's reach.

Mr Lynch bought guernseys worn by Power players there too, and son Jake got the first look when they arrived.

"He opened up the ones he got from China one day," Jake said.

Port Adelaide Football Club said Mr Lynch was one of its most passionate supporters.

"The club is blessed with some of the most passionate members and supporters in world sport and Anthony is no exception," a club spokesperson said.

"It is supporters like Anthony who make our club so special and drive our success."

The feeling is mutual.

"Port Adelaide is steeped in tradition. Whether people in South Australia like it or hate it, they know it and they all want to beat Port Adelaide because they've been a very successful club," Mr Lynch said.