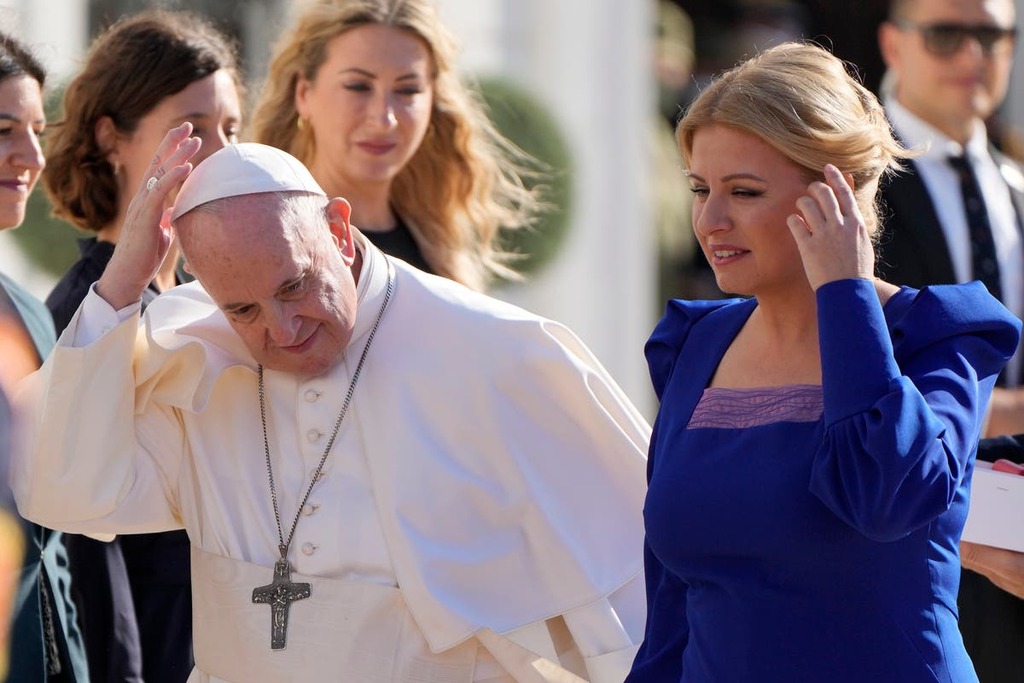 Pope Francis opened his first full day in Slovakia on Monday by meeting with the country's president ahead of an encounter with the country’s Jewish community to honor its Holocaust dead and atone for Catholic complicity in World War II-era racial laws and crimes.

Francis arrived at the presidential palace looking well and rested on the second day of his four-day pilgrimage to Hungary and Slovakia that marks his first international outing since undergoing intestinal surgery in July.

In a message to the Slovak people written in the palace book of honor, Francis wrote that he came as a pilgrim to Bratislava and was praying that the country may be a “message of fraternity and peace in the heart of Europe."

After a rigorous day in Budapest on Sunday, Francis, 84, spends Monday in Bratislava where the highlight of his visit is an afternoon encounter at the capital’s Holocaust memorial, built on the site of a synagogue destroyed by the communist regime in the 1960s.

He goes into the event having called on Sunday for Christians and Jews to work together to stop the rise of antisemitism in Europe, saying it was a “fuse which must not be allowed to burn.”

Slovakia declared its independence from Czechoslovakia on March 14, 1939 and became a Nazi puppet state with a politician and Roman Catholic priest Jozef Tiso becoming the country’s president.

Under his rule, the country adopted strict anti-Jewish laws and deported some 75,000 Jews to Nazi death camps where some 68,000 perished. Tiso was sentenced to death and hanged in 1947.

Now, only about 5,000 Jews live in Slovakia, a largely Roman Catholic country of 5.5 million currently ruled by a four-party center-right coalition government.

Just last week, the government formally apologized for the racial laws that stripped the country’s Jews of their human and civil rights, prevented their access to education and authorized the transfer of their property to non-Jewish owners.

Marking the 80th anniversary of the “Jewish Code” adopted on Sept 9, 1941, the government said in a statement Sept. 8 that it “feels a moral obligation today to publicly express sorrow over the crimes committed by the past regime.”

The code was considered one of the toughest anti-Jewish laws adopted in Europe during the war.

Slovakia is now home to the far-right People’s Party Our Slovakia party, which has had members in Slovakia’s Parliament since 2016. The party openly advocates the legacy of the Slovak Nazi puppet World War II state. Its members use Nazi salutes and want Slovakia out of the European Union and NATO.