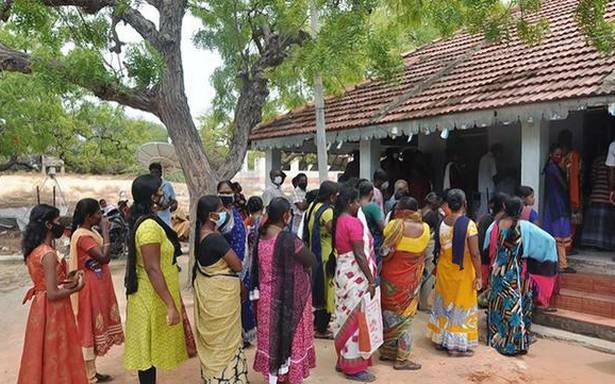 Their list of woes is quite long. Housed in 108 camps in 29 districts of Tamil Nadu, Sri Lankan Tamil refugees suffer from the size of dwelling units — at many places, 10 ft x10 ft — and lack of water supply, cleanliness and sanitation. There are some camps with no exclusive fair price shops, compelling women to spend a few hours at times for their turn to get the essentials.

The Mandapam camp near Rameswaram, which served as the key transit point since 1983 for refugees before they were transferred to other places, has a bumpy main road with several decrepit buildings. It houses 1,441 refugees of 446 families.

At the Kottapattu camp in Tiruchi district, the 40-year-old houses look dilapidated. A total of 152 toilets, including 36 new ones, are available for 472 families. The new toilet block with 36 toilets — 18 each for male and female — remains unopened after its construction three years ago. However, the residents have built makeshift bathrooms outside their houses.

K. Mayuri, who came to the camp as a young girl in 1990, is now married to a fellow inmate, helping other residents access welfare assistance. “We have written several petitions to the Collector for better sanitation facilities,” she says, adding that drainage pipelines outside the houses overflow throughout the year, and the situation goes from bad to worse during monsoons.

Tamilselvi and Koikila, young women at the Mandapam camp, and Deivanayagai, an elderly woman and resident of the Puzhal camp near Chennai, have more or less the same story to narrate. The residents of the Mandapam camp want separate toilets for women and better electricity supply, while those of Puzhal, who came to the State from Trincomalee in the Eastern Province in 2006, emphasises the need for improving sanitation, especially when the whole world talks about hygiene in the light of the COVID-19 pandemic.

Reeta Stanlos, 73, a resident of the Palavathanur camp in the Salem district since 1990, along with other senior citizens, is running a self-help group to manufacture phenyl. “Include me and many others under an old age pension scheme as the money would be of great help to us to meet the medical and other personal expenses,” she pleads. She also wants the government to provide individual homes to multiple families which are living together in the same houses.

“Only one dispensary is here [Bhavanisagar] and the nearest hospital is 15 km away, which is in Sathyamangalam,” says Vijayarani, a resident of the Bhavanisagar camp in Erode district. The camp is home to 3,152 members belonging to 1,055 families. The district has two more camps — Arachalur and Enjampalli village of Modakurichi taluk. Demanding a primary health centre at the camp, Ms. Vijayarani points to pigs roaming in the area.

Officials of the Rehabilitation Department emphasise that the government’s proposed makeover has got answers to the problems.