A polyamorous family of two mums and two dads are so close they don’t even know who their children’s dads are.

Taya and Sean Hartless hooked up with Alysia and Tyler Rodgers online in 2019 with the intention of spicing up their sex life.

However, the married couples grew close and eventually they all began to admit having feelings for one another.

The family moved in together in 2020 and the parents went on to have two other children between them, to add to Tyler and Alysia’s two youngsters.

Now, the ‘quad’ parent all four as their own. As the parents all sleep with each other, they don’t even know who the dads of their youngest children are - and they say they want to keep it that way, according to Hull Live.

Taya, 27, says despite some other family members not approving, they wouldn’t change their setup for anything - and believes it is the best way to parent. She said: “None of us had been polyamorous before, but we all just met and fell in love.

“Since we moved in together we all just co-parent all the children - we’re one big family unit. A lot of people don’t really understand polyamory, and think it is deviant or un-wholesome in some way.

“It is true that it wasn’t always easy - it took me a while to admit I had feelings for someone else - and we definitely do get jealous sometimes. But now it’s so natural to us all and I feel so grateful to have multiple partners to raise children with.

“Why wouldn’t you want more love and support and more hands around? It’s a messy, hectic, crazy, wonderful life - and I can’t think of anything else we could ever want.”

The two couples both crossed paths when searching online for another married couple to become physical with in early 2019. Tyler and Alysia travelled two hours to meet them for the first time that June, and the couples hit it off, and began meeting regularly.

As time passed, they began to feel drawn to one another - with Sean and Alysia admitting feelings for each other, and eventually Taya and Tyler doing the same. Taya said: “From the first night we met, we all wanted to just see more of each other.

“It wasn’t easy - there was a lot of hesitations around having feelings. Sean was the first to point it out - he said ‘we can’t deny this is happening’.

“We agreed to talk it out to see what the future would look like. At first, I was really scared to come out and admit my feelings for Tyler - I was scared to let someone else in.

“But eventually we all admitted how we felt.”

The two couples began looking for a big family home that they could all live in together. Taya and Sean moved in early 2020 - and as a true test to the new relationship, they were all immediately plunged into lockdown.

Taya explained that they fell into a ‘quad’ style relationship - where everyone is equal to everyone else, despite some people being married. She said her and Sean are married whereas her and Tyler are in a relationship, and the same is true in reverse with Alysia.

Taya explained that the men switch rooms every night - so one night they will be with one woman, and the next night the other. Although Alysia and Taya, and Sean and Tyler, are not dating, they all see each other as close partners.

But the family are considered a ‘closed quad’ in that they don’t date anyone external to their four. Taya said: “We are all on the same page in this quad - although some of us are married, it is a true square with no inner sections.

“At the start, I would share two nights with Sean and one with Tyler, but now it’s non-hierarchical. We’re all on the same page and it works better this way.”

“As far as dating, we try and do a quad date once a month. We also try and prioritise individual dates too, although it might take a month to get each of us out.

“We spend all holidays and big events together as one big family, of course.”

Taya, Alysia, Sean and Tyler became such a tight-knit quad that when they began to discuss having more children, they came to a surprising agreement. As both women sleep with both men, they agreed to continue as normal and be content not knowing who the father of their children would be.

Taya said: “There was no regulation of who the father was and we said we didn’t care. We don’t know and don’t want to know - we said we would all be parents to all of them.”

Alysia gave birth to a boy on April 3 2021 and Taya gave birth to another son on August 11 2021, with all four thrilled to grow the family. Taya explained that the children call her ‘mama’ and call Alysia ‘mom’ while Sean is ‘daddy’ and Tyler is ‘dad’ - and the kids proudly tell friends they have “two moms and two dads”.

Taya looks after the youngest two while Alysia, electrician Tyler, and Sean, who works in a high school go out and work during the week and the older children are in school. Taya said: “People ask, does it make a difference that one is not biologically mine?

“But I have stayed home with him since he was a few months old and there is nothing that would change my relationship with him if I were biologically connected to him. I find it very easy to love a child of any of the people that I love – that’s the same for all the children.”

Taya said being in a polyamorous relationship has the same challenges you get in a normal relationship, such as jealousy – although a lot of people assume that’s not the case with polyamory. Taya said: “Like any relationship, it requires a lot of communication and telling people what your needs are.

“It’s good to talk about negative things like that as a way to solve problems. It’s very comforting telling your partner ‘it’s not your fault that I feel this way, but I’d like your input’ and finding a way to get the support you need when you feel that way.”

Taya explained that one of the biggest issues the family face is misunderstanding about what polyamory is, and negative reactions as a result. She said: “A lot of people think polyamory is deviant in some way and it isn’t ‘wholesome’ but for us it’s just our relationship.

“Some people find it hard to understand why anyone would date when already married, but it’s not just about the end goal of marriage. It’s about spending time together and having a support system.

Taya admitted another issue is that the family “had some pushback” from close friends and family who later distanced themselves. But many of their friends and family have been very supportive and she said the experience has “shown who loves us unconditionally.”

Taya insists no matter what others think, she along with Sean, Alysia and Tyler will are “committed for the long run” and hope to share positivity and help people to understand polyamory. She said: “I don’t think we’ll ever stop learning and we know our relationship will be constantly changing. But we will roll with the punches and make it work.

“We are different from everyone else but that’s ok – and we have made it clear to our children that they can be whoever they want to be. She added: “I always find myself sat thinking about how much I love our life.

“I’m just really excited for the future and raising our kids together. I can’t wait to be the big crazy family that all shows up together. It’s a messy hectic crazy wonderful life – that about sums us up!” 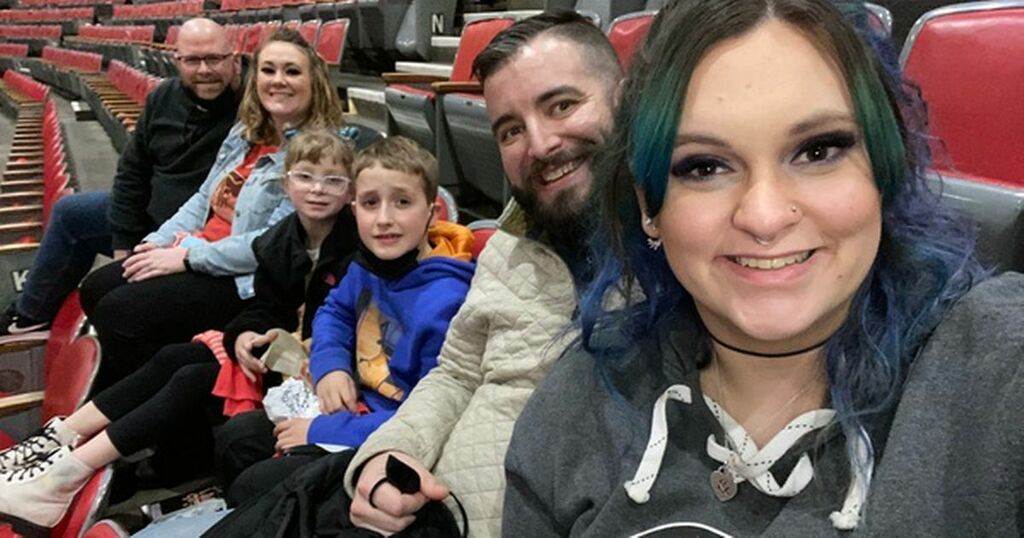 Polyamorous family so close they have no idea who children's dads are
Taya, Sean, Alysia and Tyler all sleep together and have no interest in knowing who the biological fathers of their…

As both women sleep with both men, they agreed to continue as normal and be content not knowing who the…

The family is made up of two sets of parents