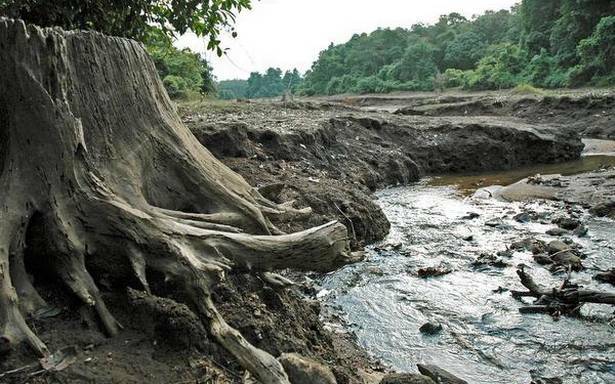 The agencies responsible for the protection of the Periyar River continue to grope in the dark on the increasing cases of discolouration of the water body that remains the sole drinking water source for lakhs of people.

The change in the character of the water was visible on Saturday and Sunday. This was the fourth such incident reported in the industrial stretch over the last two months. Despite the growing cases, the government departments, including the Kerala State Pollution Control Board, local bodies along the river stretch and the Irrigation Department have not been able to identify the source of discolouration. The latest incident was reported upstream of the regulator-cum-bridge at Pathalam in Kochi.

Interestingly, the Pollution Control Board (PCB) has stated that specific identification of the source was difficult in such incidents. The results of the sample analysis had not yet revealed any type of pollution.

However, senior board officials admitted that the discolouration was continuing along the Eloor-Edayar industrial stretch. The need of the hour is the timely implementation of the projects listed under the Periyar Action Plan. Some of the pending proposals include construction of a bund road and installation of CCTV facility along the river banks to track the violators, they said.

The delay in acting against those responsible for the pollution of the river had further worsened after the chairman of the board issued a directive that the agency will no longer act on complaints that are not routed through the Kerala Centralised Inspection System. Though it was made clear that the directive was not applicable to sudden episodes of pollution, there has been no inspections yet on industrial units suspected to be responsible for the illegal discharge.

Taking a serious note of the frequent discolouration in the river, the State Level Monitoring Committee on Solid Waste Management (SLMC) appointed by the National Green Tribunal (NGT) pointed out that it will soon update the tribunal on the issue.

Any attempt other than holding surprise inspections in the industrial units near the river banks would be an exercise in futility, said A. V. Ramakrishna Pillai, chairman of the SLMC. The committee had recommended similar measures in its earlier reports on the pollution of the river.