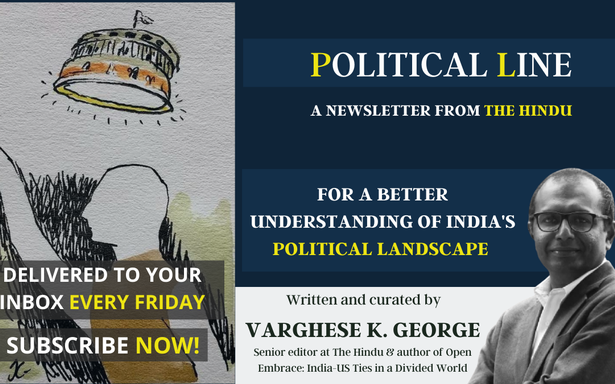 (The Political Line newsletter is India’s political landscape explained every week by Varghese K. George, senior editor at The Hindu. You can subscribe here to get the newsletter in your inbox every Friday.)

The volatile situation in Afghanistan, particularly the ascendance of the Taliban to power, has pushed India into a difficult corner, strategically. For the Bharatiya Janata Party though, there could be some political gains to be made. For one, reports of threats to Hindu and Sikh minorities in Afghanistan add fuel to the BJP’s Hindutva agenda. Ahead of crucial State elections next year, including Uttar Pradesh, this will play out. Prime Minister Narendra Modi prefaced the line of argument on August 28, speaking at a ceremony to dedicate the renovated Jallianwala Bagh memorial. Mr. Modi said India stood ready to help Indians in trouble anywhere in the world. “Keeping the gurus’ teachings of humanity at the forefront, the country has passed new laws for its own people who were troubled by such circumstances,” Mr. Modi said. Though he did not elaborate, “new laws” was a reference to the Citizenship Amendment Act, 2019, which seeks to fast-track citizenship for Hindu, Parsi, Buddhist, Christian and Sikh immigrants from Pakistan, Afghanistan and Bangladesh.

The BJP is now soft-pedalling the implementation of the CAA that is being fiercely opposed by the Opposition and the Muslim community. The rationale for the law advanced by the BJP was that in the neighbouring Muslim majority countries, non-Muslims were being discriminated against.  The situation in Afghanistan has added additional force to the BJP position. There is an inconvenient point of detail though -- India has already established contacts with the Taliban, and is looking at viable ways of engagement with its government in Afghanistan. But then, as we discussed in an earlier edition of PL, it is all about the way a story is told.

When sycophancy can be career-limiting

Sycophancy is the reigning currency of politics, and one can see any number of people in power who are there only because they are obsequious to those who are more powerful. The culture of sycophancy in Tamil Nadu has been uniquely notorious. The late J. Jayalalithaa had cabinet ministers prostrating before her in public routinely. DMK chief and Tamil Nadu Chief Minister M.K. Stalin has a different approach. He issued a warning against his party MLA in the Assembly last week, after the latter went on heaping praises on the former, unmindful of his party president’s repeated advice not to spend time on compliments.  In another instance,  he ordered to retain the photos of former Chief Ministers [AIADMK] on 65 lakh school bags meant for free distribution, saving Rs. 13 crore for the exchequer. Usually, such items are discarded when the Chief Minister changes.

Mamata Banerjee’s rise to power was accelerated by her strident battle against the industrialisation drive of the previous Left Front government. In the process, she reinforced her image as a leader hostile to industries and further weakened the State’s chances of industrialising. Having won three consecutive Assembly elections, she appears to feel the need to woo industry to the State.

In the last two editions of PL, we discussed the political tussle over the legacy of the 1921 Moplah Rebellion. In this piece, author Manu S. Pillai sets the violence of 1921 in the Malabar region of Kerala in its historical context. “Although the 1921 rebellion is often discussed in isolation, this prehistory is integral to making sense of its economic, social, and religious facets. For by the 20th century, the Mappilas had been marginalised in the very land where they were once esteemed…”

Another inheritor of YSR’s legacy?

Y.S. Rajashekhara Reddy was the Congress Chief Minister of undivided Andhra Pradesh when he died in a helicopter crash in 2009. He was also a key force behind UPA-1 and UPA-2. His son Y.S. Jaganmohan Reddy left the Congress and founded the YSRCP, to win power in Andhra Pradesh. He is now Chief Minister. The other successor State, Telangana, also has a YSR following which another member of the family wants to mobilise.  Y.S. Sharmila, YSR’s daughter and Jaganmohan Reddy’s sister, has launched the YSR Telangana Party. This week, she and her mother organised a memorial event for YSR in Hyderabad. Jaganmohan did not attend the function. Telangana politics is currently dominated by the TRS (Telangana Rashtra Samithi), and the Opposition space is in a flux. Sharmila is trying her luck.