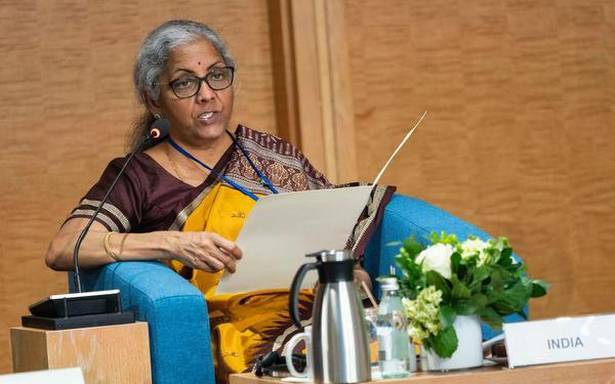 The International Monetary and Finance Committee (IMFC), which directs the International Monetary Fund (IMF) and sets its agenda, met as part of the annual meetings of the IMF and World Bank in Washington DC on October 14. Finance Ministers and central bankers, who constitute the committee, including Finance Minister Nirmala Sitharaman, were present. A communique issued by the IMFC noted that while the world economy is recovering from the pandemic, divergences exist between different economies driven by differences in vaccine availability and different levels of policy support.

The IMFC also welcomed the new Special Drawing Rights (SDR) allocation of reserve assets of the IMF, $650 billion of which were newly created in 2021. The IMFC also backed the creation of a trust — the Resilience and Sustainability Trust, first announced in June — to channel some of this money to low income and vulnerable middle income countries, hit by the COVID-19 pandemic. Ms. Sitharaman called on the IMF to provide these countries with the necessary policy support for effective use of SDRs allocated recently, the Finance Ministry tweeted.

“Priority should be accorded to modalities for channelling of SDRs on principles
that are just, clear, and responsible so that they have traction with the entire membership,” she said in a statement on behalf of India, Bangladesh, Bhutan and Sri Lanka , which was released by the IMF.

With regard to the RST, the Finance Minister said India expected more engagement with stakeholders. “ Going forward, we expect wider consultations and deeper engagement with key stakeholders which is important for the success of the initiative,” she said in her statement.

The Minister expressed concern over the differences in vaccine access among rich and poor countries. She also called for a recognition of the challenges faced by developing countries with regard to climate finance and technology – messages she had delivered to the G20 on Wednesday.

The IMFC  communique – an agenda-setting document – said strong international cooperation and “immediate action” was needed to speed up universal vaccination and that the they ( the IMF and , indirectly, Fund members) would take steps to boost the supply of vaccines and essential medical products.

Fund member countries also said they would continue to prioritise health spending to protect those most vulnerable, and when appropriate shift their focus from crisis response to growth promotion and long term fiscal sustainability, the communique said. They also committed to “further accelerate climate action in line with the Paris Agreement “ and build a more sustainable global economy.  They would also collaborate to realise the potential of the digital economy, the document said.

Ms Sitharaman, in her statement, called for a closer examination of the impacts  on emerging markets of “ faster than expected” normalization of policy in advanced economies. She said the Fund would need to play a key role in ensuring the smooth transition of policy withdrawals.

On climate, she said India and other developing countries faced a “formidable” challenge of affordable finance and low cost technology and developing countries would need $500 billion annually by 2030 to limit their emissions, and that private capital may not fulfill these gaps.

The IMFC welcomed the statement from the IMF’s Board on the review of the independent investigation into the World Bank’s Doing Business 2018 Report . An independent inquiry found that IMF Managing Director, Kristalina Georgieva (who was the World Bank’s CEO in 2018), had pressured  Bank staff with regard to China improving its ranking in the report in question. However, the Board did not find this sufficient grounds for her removal.  Ms Georgieva, who had strong backing from European countries, repeatedly defended herself during the course of this week.