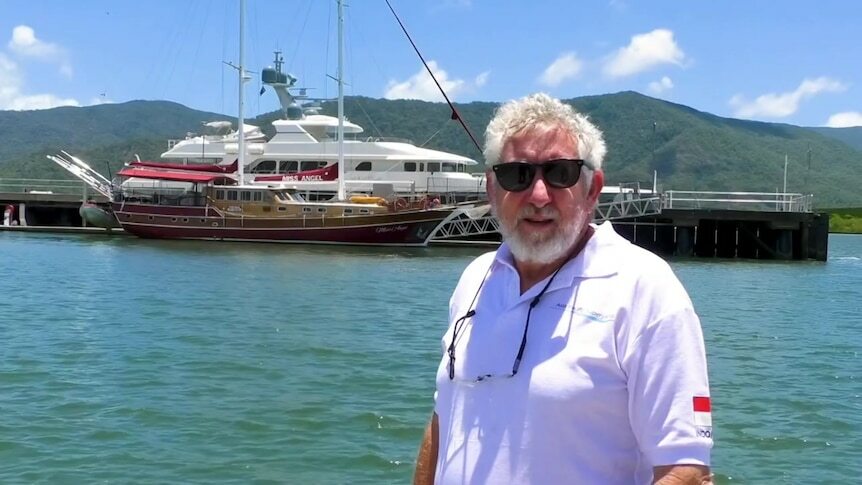 Police have released CCTV images of two people they believe can help with inquiries over the death of a diver and discovery of $20 million worth of cocaine in the Port of Newcastle this week.

Strike Force Groove has been established to investigate how the man's body was found floating in the water, surrounded by bricks of drugs, about 9:30am on Monday.

Police have identified the diver, who was from South America, and the coroner has assessed his remains.

On Friday police issued pictures of a man and a woman who Detective Superintendent Robert Critchlow said "may have some knowledge about what has happened" to the diver.

The man is described as being of South American appearance, about 178cm tall with an athletic build.

The woman is described as being of a thin build, about 150-160cm tall with a tanned complexion and blonde or grey hair.

Detective Superintendent Critchlow said the man and the woman were from overseas and that police believed they had arrived in Australia by boat.

"We hope they haven't left the country already," he said.

"We've been working with our partners from ABF and AFP there.

"They're certainly under notice. It will be very very hard for them to move.

"We're still investigating how they actually entered the country, which may have been through unlawful means."

Meanwhile, police were granted permission on Friday morning to extradite to NSW a North Queensland yacht captain who has been charged over the drug haul.

James "Jimmy" Blee, 62, was arrested on Wednesday afternoon at Cairns Airport while allegedly trying to board a plane on a one-way ticket to Singapore with "large amounts of cash", the court heard.

He landed in Sydney about 4:30pm on Friday and was escorted by police on the tarmac.

Earlier he had appeared at Cairns Magistrates Court, where police lodged the extradition application.

Mr Blee appeared calm when he was brought to the dock, even waving and making heart shapes with his hands to family members who sat in the gallery.

His lawyer Chris Nyce did not oppose the extradition order but did file an application for bail, which was rejected.

Mr Nyce questioned whether Mr Blee's arrest was lawful, then spoke of his client's long career as a skipper on luxury yachts, his high regard in the business community as well as his lack of criminal record.

But Police prosecutor Sophie Gorrick opposed the bail application, telling the court Mr Blee was a flight risk as an experienced skipper and with his wife currently in Indonesia.

She also told the court there was CCTV footage of Mr Blee and the diver at dive shops around Newcastle.

Mr Blee's arrest came as organised crime detectives searched for links to the drugs in Newcastle.

A diver's body was found floating in the water at Kooragang, while packages of cocaine — weighing a total of 54kg — were discovered nearby.

The recovered drugs have a street value of about $20 million.

Police believe the man, wearing specialised scuba equipment, perished trying to retrieve the drugs and was "left to die" by unknown accomplices.

"The logistics of this operation were huge. Many, many moving parts."

Police suspect the drugs were smuggled into the country on cargo ship the Areti GR, which arrived from Argentina on Sunday.

Another 46kg was likely moved from the ship onto the streets of NSW, police say.

An investigation is underway into potential connections between the NSW bust and Indonesia's biggest seizure of cocaine this week.

Investigators say they have only accounted for a third of the 300kg shipment of drugs suspected of being on the Areti GR when it left South America.

Indonesian authorities on Sunday seized 179kg of cocaine after it was apparently dumped into the sea near Java.

Australian authorities are liasing with Indonesian counterparts as part of the ongoing investigation.

CocainePoliceNewcastleNew South Wales
Sign up to read this article