By Leanne Wong and staff 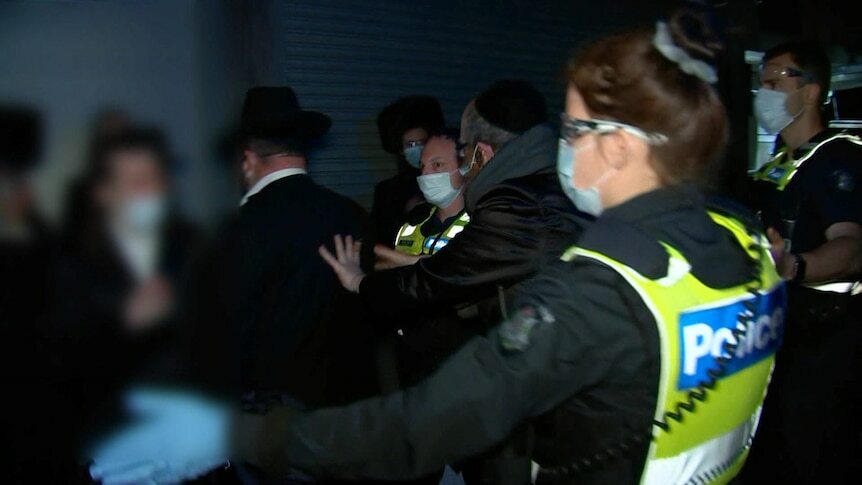 Police have fined a number of people in Melbourne's inner south-east and are investigating an alleged assault at a religious gathering that violated public health orders.

Six adults have already been fined and police have called for people who were at the gathering to come forward and identify themselves.

Police say some community members distracted them while others climbed over neighbouring roofs to evade officers.

Video filmed last night shows a mass of people gathered behind a synagogue in Ripponlea.

It is believed the people were attending a celebration to mark Rosh Hashanah.

Police moved in to break up the event, leading to confrontations and heated discussions outside the venue.

A news cameraman was also allegedly assaulted while filming the gathering.

He was treated in hospital for suspected concussion and police are investigating the alleged assault.

Police Assistant Commissioner Russell Barrett said he was "appalled" by some of the behaviour.

He said it was believed about 20 or 30 people took part, and he was "very comfortable" with the decision by police to wait outside the synagogue.

"We went through a process of peaceful negotiation. We didn't force entry to the premises," he said.

He said as police were engaging with worshippers leaving the synagogue in the evening another group of community members "came towards the area, distracting police from their role and causing us to have to move away from the door".

"At that point in time, we now understand, members from within the facility have exited, some over neighbouring roofs, to escape police attention," he said.

He said the people that remained had been fined.

"My investigators will not just look at those people who were present in the venue, but will look at what breaches of Chief Health Officer's directions were caused or might have been committed by those people that attended later in the night," he said.

He said it was important to point out that people from across the community were breaching health orders.

"We saw it this week with a highly-prominent Instagram influencer," he said.

He also said police had been alerted to the gathering by other members of the Jewish community.

"The vast majority of the Jewish community and a lot of community leaders have spoken out against the actions of this small group," Assistant Commissioner Barrett said.

Police said a number of children were present, and would not be fined, and some people who attended had not yet been identified.

Local business owner Steve Davis told ABC Radio Melbourne he saw up to 40 people going in and out of the synagogue, in what he said was a "blatant disregard for the rules".

"Businesses are being crushed by lockdowns, and these sorts of gatherings are just going to extend the misery for these mum and dad businesses that really can't afford to be locked down for any longer than they need to be," he said.

Josh Burns, federal Labor MP for Macnamara, has been working with state Liberal MP David Southwick to reach out to the community and manage local outbreaks.

He said the gathering was "deeply frustrating".

"I know that this pandemic has taken its toll, and I know that everyone is desperate to get back together," he said.

"But we all need to dig deep and do the right thing."

Mr Southwick, who has just been elected deputy leader of the Victorian Liberal Party, said "if people are breaking the rules, there needs to be consequences".

Premier Daniel Andrews said he understood it had been a tough year for many Victorians, but urged people to keep following the rules.

It is not the first alleged breach of COVID-19 restrictions filmed and made public in the past week.

Ms Bartel posted an apology to public health workers after a video emerged of her and several friends gathering at a home in Richmond on Thursday.

The four women were fined $5,452 each and an investigation into allegations of drug use is continuing.

A number of people linked to the party later tested positive for COVID-19.