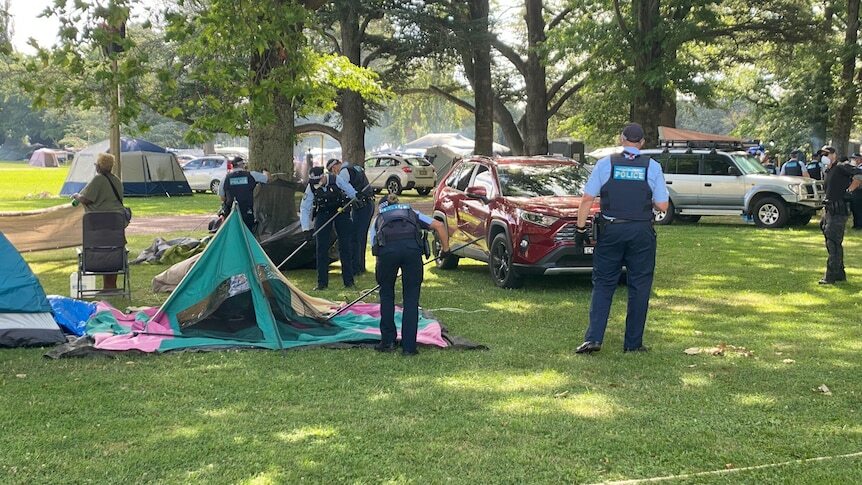 Police officers have dismantled tents near Old Parliament House after a group of protesters ignored a deadline to leave the precinct.

The demonstrators, who were camping near the Aboriginal tent embassy but are not associated with it, had been gathering in the area for weeks.

At least 200 officers moved into the site about 4:20pm, after a deadline for protesters to move on, and began removing camping equipment and taking the tents apart.

The equipment was packed up and loaded onto trucks.

A police message had been broadcast throughout the day to the several dozen people at the campsite, warning that they were trespassing and their belongings would be seized.

"ACT Policing respects your democratic right to peacefully protest at this location," the message said.

"Unauthorised camping within the parliamentary triangle, however, constitutes a breach of Commonwealth law.

"You may as an alternative set up a declared camping area."

Many of the protesters remained in the area during the police operation, which was mostly peaceful.

However, later in the day, officers arrested three people as they continued to dismantle the campsite.

ACT Policing said in a statement that its action at the site on Friday afternoon followed a request from the National Capital Authority (NCA) to remove all structures and vehicles that lacked permits.

The NCA is preparing the area for the tent embassy's 50th anniversary, which is Australia Day.

Some demonstrators complied with the police request to move on, disassembling their own tents.

The protesters are demanding sovereignty and refuse to recognise Australian laws. Some oppose COVID-19 vaccinations.

The Aboriginal tent embassy and Canberra Indigenous leaders have said previously that they want the protesters to leave the area.

As police moved in, protesters at the scene stood in a group and used clapping sticks, while one man yelled into a loudspeaker: "there's no authority or jurisdiction over this land".

Late last month, the doors of Old Parliament House were set alight during the protests.