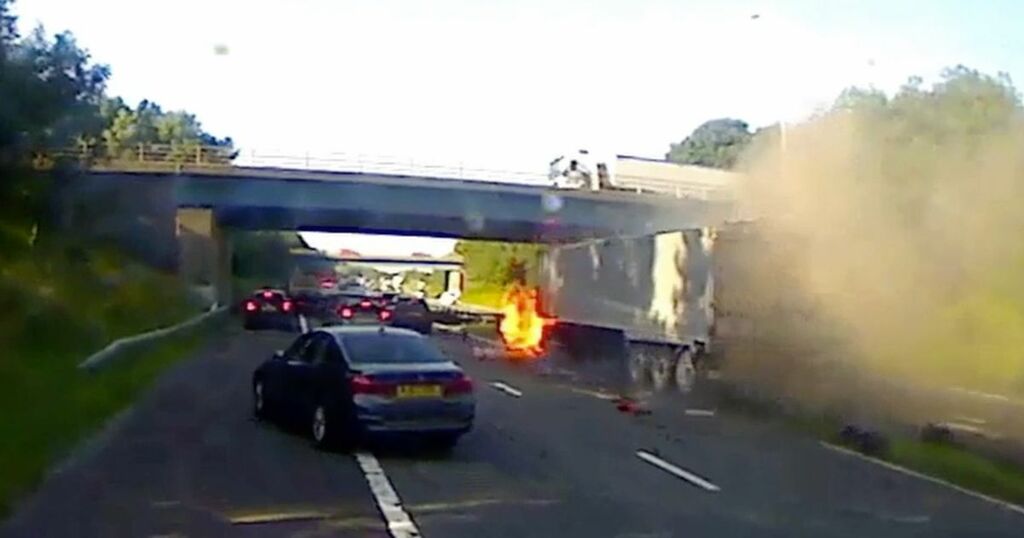 Police have released footage of the horrifying moment a Scots-based HGV driver killed three people in a 'fireball' crash while trawling an adult site on his phone.

Onut was looking for casual sex with strangers on Apps, 'Shag Today' and 'Mystic Match' before his flame-engulfed lorry careered into two cars and a motorway barrier.

We told how carnage broke out down the motorway at Bowburn, Co. Durham.

Initially all is calm on the dashcam footage as it captures clear driving conditions.

However Onut's HGV is then seen speeding down the opposite carriageway, with huge flames billowing out of the underside of the motor.

Spinning in the process, the white motor is hurled into the back of a red car immediately in front.

It too is spun round by the sheer force of the white motor and the lorry.

Meanwhile Onut continues, careering another 100m down the motorway and smashing into the inside barrier.

Motorists in the other lane, furthest from the barrier, made a lucky escape, as they all rushed out into the hard shoulder.

Some drivers are seen getting out of their vehicles to escape the huge blaze.

A court heard Onut was paying no attention to the road and made no attempt to brake as he ploughed into the stationary traffic in his 3.5 tonne HGV.

Onut, 41, admitted three counts of causing death by dangerous driving after Durham crown court heard he had been using his phone all day while in his cab.

Jailing him, Judge James Adkin told him: "You were trawling the internet on a dating site looking for casual sexual partners and such was your preoccupation you failed failed to see the traffic slow and stop in front of you.

"Your vehicle, weighing approximately three and a half tonnes, ploughed into lines of stationary traffic at 58 mph. The consequences were catastrophic. I have watched dashcam footage showing an immediate explosion as your track rammed into the vehicle in front of it.

"Your truck then careered out of control for 100m destroying everything in its path. You were browsing the internet for 40 minutes, preoccupied with forming casual sexual relationships while driving along the motorway at more than 50mph in a heavily laden large goods vehicles."

Nick Dry, prosecuting, told how drivers noticed Onut swerving all over the road despite hazard warning signs caused by a crane which had spilled some fuel on the hard shoulder.

One motorist thought that he had fallen asleep as the lorry went first onto the hard shoulder, then across the first lane of the carriageway, then close to the central reservation.

In reality, he was showing a 'flagrant disregard' for the rules of the road by driving while seeking casual sex on his phone. "One driver became concerned because the driving was so erratic," said Mr Dry.

"There was a chain reaction of vehicles crashing into each other and a fireball. The defendant was dragged from his vehicle by a driver, and said he had not had the chance to stop.

"Three motorists were found to have died. The collision had been at a time when visibility was good and the position of the sun posed no difficulty.

"The defendant's failure to pay attention meant he was utterly oblivious to the stationery traffic which he went into at 58mph...before the lorry burst into flames."

Examination of Onut's mobile phone showed he had been using it 'extensively throughout the day' while driving from north up the A1 from the south.

Mr Dry added: "The history showed that the defendant had been using the adult dating sites 'Shag Today' and another called 'Mystic Match'.

"He had been driving at speeds over 50mph while using the Shag Today site. He had 2,500 credits for £49.95 and had sent messages and replies.

"He had been physically using the phone to pay for credit and was sending messages as well as editing his profile.

"He demonstrated flagrant disregard for the rules of the road and the grave dangers to others."

He had missed clear warnings to delay and reduce speed, the court heard.

Records showed he had registered with Shag Today on July 11 and with Mystic Match at 3.19pm on the day of the collision.

"He had been on both sites for views, search and selections which required him to interact with the handset while driving a large good vehicle on the A1M," Mr Dry added.

"The last activity was at 18:17 and six seconds which was at the point of impact with the vehicle of Elaine Sullivan and David Daglish."

In a moving victim impact statement, their soldier son Junior Sullivan, who served with the military in Afghanistan, said his world had 'changed forever' when told the devastating news of the loss of his devoted, loving parents.


He felt "unbearable rage at the sight of other drivers using their mobile phones". He added: "There are no words for the pain and suffering this has caused.

"Nothing prepares you for being woken up at 5.30am by your seven and a half month pregnant wife to be told that your mum and dad have been killed in a car crash.

"My perfect life and world suddenly no longer existed." Survivor Lauren Cawton saw Onut's lorry hurtling towards her vehicle and 'had to accept that I was going to die'.

Her devastating injuries mean that she can no longer do the things which she loved, such as mountain biking and surfing.

On 24-hour pain relief, she wonders if she will ever enjoy life again.

Judge Adkin said the sentence had to reflect the serious punishment for drivers using mobile phones who caused death and serious injury.

Speaking after the case, Sgt Catherine Iley, of Durham Police, said: “This was a truly harrowing incident and our thoughts remain with the family and friends of Elaine, David, and Paul.

“They have shown great dignity throughout and have assisted wherever they can, while trying to come to terms with the loss of their loved ones in such devastating circumstances.

“It was incredibly distressing for those who witnessed the collision, and for emergency responders, including police officers, firefighters and paramedics. The horror of what they witnessed that day will no doubt remain with them for many years to come."

Officers thanked members of the public, Highways England, and soldiers from the 4th Regiment Royal Artillery based in North Yorkshire who assisted at the scene.

Sgt Illey added: “This case serves as a dreadful warning of what can happen when drivers use a mobile phone or device whilst behind the wheel of a vehicle. Simply put, don’t use one.”