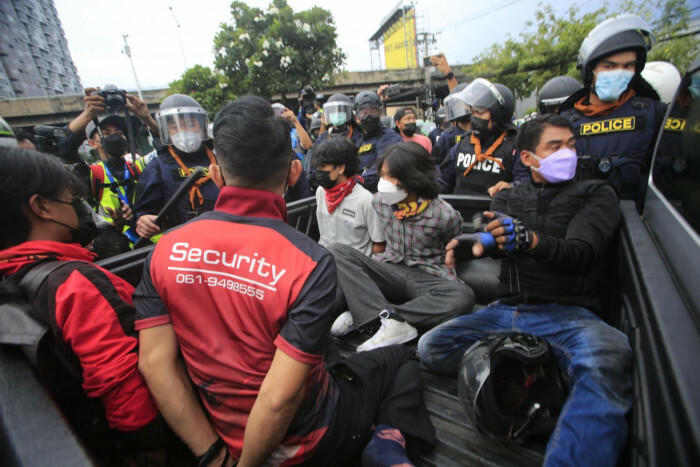 Eighteen protesters of the "Thalu Gas" group have been apprehended for allegedly damaging state property including circuit control panels operating a major water drainage tunnel on Monday, according to the Metropolitan Police Bureau (MPB).

Violent scenes were witnessed when the Thalu Gas group clashed with riot police around the intersection. The mostly young protesters partially occupied roads in the area and hurled marbles and hard objects, as well as improvised explosives, pipe bombs, incendiary bombs, and firecrackers, at nearby state and private buildings.

Pol Maj Gen Piya said the City Hall's Department of Drainage and Sewerage was assessing the damage and seeking legal action against the culprits.

"They can't even be called protesters, victims, or political activists. They are lawbreakers, plain and simple," said Pol Maj Gen Piya.

Since July of last year, police have identified 684 protesters, 427 of whom were caught in 179 protest-related cases. Police also confiscated 115 of their motorcycles.

Meanwhile, anti-government protesters have routinely convened at Asok intersection to put pressure on Prime Minister Prayut Chan-o-cha to step down.

On Monday, protesters dropped a large quantity of papers containing their protest demands from the skywalk over the intersection.