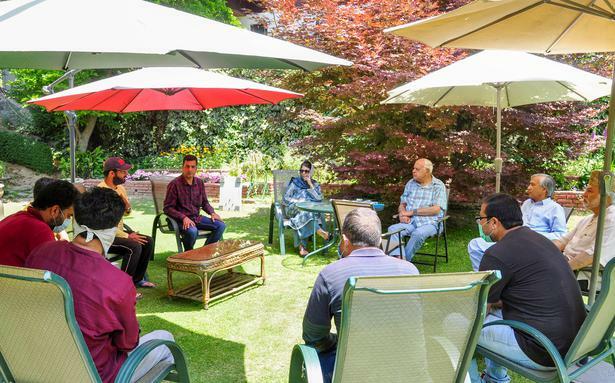 Gupkar Alliance appeals to local Muslims to ensure Pandits’ safety
Don’t leave the Valley, this is your homeland, it tells Kashmiri Pandits

The Hindu
Gupkar alliance meets J&K L-G, inquiry ordered into use of force against Pandits

The Hindu
One subscription that gives you access to news from hundreds of sites
Farooq, Mehbooba blame ‘The Kashmir Files’ for anger in Kashmir

“Youth are angry here for how they are being perceived outside,” said National Conference president Farooq Abdullah, accusing The Kashmir…

Tourism is not a sign of normalcy, says NC vice-president

With no let-up in the targeted killings of Kashmiri Pandits and non-local labourers that began in the Valley 18 months ago, intercepted messages by militant outfits on social media and chat applications are sending ominous signals.

Hours after the little-known outfit Kashmir Tigers claimed responsibility for the killing of a Kashmiri Pandit employee at his office in Budgam, a web portal, apparently run by the militants and monitored by the security agencies, had a post which said that the fresh targets would be “migrant Pandits who are getting government jobs especially in departments which are important for demographic changes”.

The post underlined the Revenue Department, which deals with the implementation of the land laws, and claimed that “30% of employees recruited were non-locals and migrant Pandits”.

Monitoring of chat rooms and pro-militant blogs by security agencies has pointed to a “a dangerous narrative” that Pandit employees were being giving preference in key departments such as the Sales Tax Department.

“Public prosecutors who resistance fighters ignored previously have to be targeted as they are the most silent characters,” a threat post, being investigated for its location and affiliation, read. Several other posts threatened to carry out more attacks on non-locals, Pandits, and policemen.

Security forces are already on high alert in Kashmir, and the Jammu and Kashmir police have taken “several measures this year to ensure safety of minorities”, besides increasing area dominance of locations where Pandits live and non-local labourers work.

According to police data, at least nine non-local labourers have been shot at and injured by militants in south Kashmir and Srinagar so far this year. Most of the attacks were reported from Pulwama, a industrial hub in south Kashmir.

Three local Hindus have been targeted since March this year. Two of them — Satish Kumar Singh, who was a Kashmiri Rajput Hindu, and Rahul Bhat, a Revenue Department employee — were killed in the attacks. A Kashmiri Pandit, Bal Krishan, who did not migrate in the 1990s and ran a medical shop, was also shot at and injured in Shopian in April.

A police investigation into the first killing of a minor community member following the abrogation of the special status of Jammu and Kashmir under Article 370 in August 2019, suggested that militants started attacks on minorities on December 31 that year when Nischal, 62, a goldsmith, was shot dead in his shop on the busy Hari Singh High Street in Srinagar just days after he obtained a domicile certificate. He was reportedly planning to buy property in Kashmir.

Official data suggest that at least 16 Kashmiri Pandits and non-local Hindus have been killed by militants in Kashmir after the special status of J&K was revoked in 2019. In 2021, three Pandits, one Sikh and five non-local Hindus died in targeted killings.

The casualty figures are high compared with the targeted killings that took place between August 1989 and January 19, 1990. The period saw mass migration of Kashmiri Pandits followed by an unprecedented rise in militancy in the Valley. A top retired police officer said the number of targeted killings in that period was “in single digits”.

Another worry for the security agencies is outfits gaining likely access to police data about people who worked in different wings. Two off-duty policemen, one in Srinagar and another in Pulwama, were killed in early morning attacks in May. The Kashmir Tigers, which first carried out a major attack on December 14, 2021 that left three policemen dead, have claimed responsibility for the attacks.

Kashmir has seen 49 fresh recruitments into militant ranks between January and April this year, compared with 42 for the same period last year.

The People’s Alliance for Gupkar Declaration (PAGD), an amalgam of local political parties in J&K, on Saturday appealed to Muslims and civil society members to ensure the safety of minorities, especially Pandits, living in the Valley.

“We appeal to the members of the civil society, religious groups and business community to rise to the occasion and understand their responsibility towards the minorities living in the Valley. They should ensure safety and security of their neighbours, especially those who belong to other communities, in these trying times,” CPI(M) leader and Gupkar alliance spokesman M.Y. Tarigami said after a meeting was chaired by Farooq Abdullah, chairman of the alliance, at his residence in Srinagar.

The alliance has appealed to Kashmiri Pandits not to leave the Valley. “This place is their homeland,” Mr. Tarigami said. The alliance, which condemned the killing of the Pandit employee in Budgam, has decided to meet J&K Lieutenant-Governor Manoj Sinha and apprise him of the issues highlighted by the Pandits during the meeting.

In Srinagar, scores of Kashmir Pandits, who had returned to the Valley under the special Prime Minister’s employment package since 2008, held a sit-in at the Press Enclave.

“In the wake of targeted killing in the past one year, we are not feeling safe in Kashmir anymore. We want to be relocated to safer places. We have not come here to die,” a protester said.

The protesters also demanded that the order that Pandit employees cannot seek transfer or leave the Valley should be declared void ab initio “in the face of death threats faced by the community”.

Gupkar Alliance appeals to local Muslims to ensure Pandits’ safety
Don’t leave the Valley, this is your homeland, it tells Kashmiri Pandits

The Hindu
Gupkar alliance meets J&K L-G, inquiry ordered into use of force against Pandits

The Hindu
One subscription that gives you access to news from hundreds of sites
Farooq, Mehbooba blame ‘The Kashmir Files’ for anger in Kashmir

“Youth are angry here for how they are being perceived outside,” said National Conference president Farooq Abdullah, accusing The Kashmir…

Tourism is not a sign of normalcy, says NC vice-president