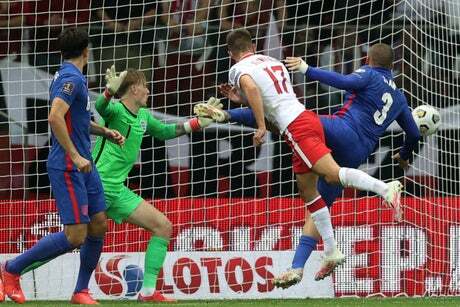 England were denied victory at the death in Poland as substitute Damian Szymanski cancelled out Harry Kane's stunner in Wednesday's World Cup qualifier.

Fresh from back-to-back 4-0 victories against Hungary and Andorra, the Three Lions rounded off their September triple-header by heading to Warsaw for what was always going to be their toughest Group I assignment.

England put in a mature performance and Kane silenced the partisan Polish crowd with a fine strike from distance, only for the hosts to roar back as Szymanski secured a 1-1 draw in stoppage time.

Southgate's side dropped points for the first time on the road to Qatar, but they remain in control of the group with four matches remaining.

It was a deflating end to what had been a largely positive evening for the visitors, who kicked on after a lacklustre first half and went ahead when Kane's strike from 30 yards beat Wojciech Szczesny.

Jordan Pickford almost played himself into trouble when his clearance hit Karol Swiderski and looped over his head, but the England goalkeeper was pegged back in stoppage time as substitute Szymanski headed home.