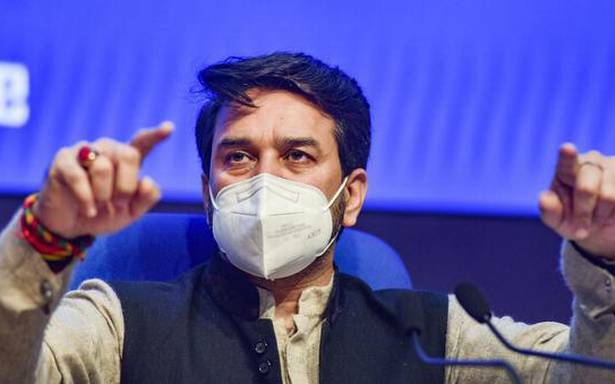 In a major security lapse, prime minister Narendra Modi's convoy was stranded on a flyover due to a blockade by farm protesters in Ferozepur on Wednesday.

“The states are responsible for the prime minister's security wherever he visits. The entire country expressed concern over what happened in Punjab," Mr. Thakur told reporters here.

The Punjab government did not take the incident seriously, he alleged.

The law will take its own course now as the matter was before the Supreme Court, Mr. Thakur said.

“But the way Punjab chief minister, the state Congress president and other leaders made comments on this issue was sad. It shows what they think and how they speak about the prime minister," he said.

"Moreover, it raises several questions and says a lot as the AICC president (Sonia Gandhi) and senior party leaders remained silent on this," the Union minister added.

To a question, Mr. Thakur, who also handles the Youth Affairs and Sports portfolio, said the Mission Olympic Committee has already been constituted, and training is being imparted to sportspersons for the next Olympic games.

As many as 1,000 centres would be set up in the country under the Khelo India initiative, and 250 of them have been already sanctioned, he added.

The I&B ministry has taken action against Pakistan-based web portals which were spreading misinformation in the country, he said, adding that such action will continue in future too.

During the ceremony, 78 officials including three women were inducted into the force as assistant commandants.

Mr. Thakur urged them to dedicate themselves to the nation while working to protect its borders and also facing challenges of internal security.