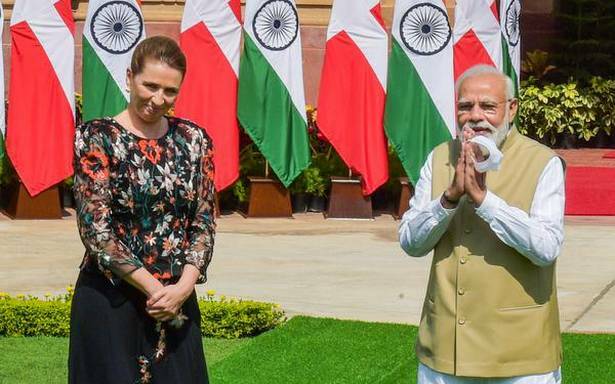 India and Denmark signed two agreements on research in climate change, while another MoU on setting up a “green hydrogen” electrolyser plant was signed between Reliance Industries and Danish company Stiesdal Fuel Technologies as Prime Minister Narendra Modi met with Prime Minister of Denmark Mette Frederiksen on Saturday. This was the first summit-level visit to India since the COVID pandemic, and the first State visit by a Danish leader since a bilateral freeze on ties a decade ago.

“We also took a decision today that we will continue to expand the scope of our cooperation, adding new dimensions to it. We have initiated a new partnership in the field of health. In order to increase the agricultural productivity and income of farmers in India, we have also decided to cooperate in agriculture related technology,” said Prime Minister Modi after the bilateral summit, adding that joint ventures on food safety, cold chains, food processing and water management would be explored as a result of their discussions.

The government agreements, including one between the Council of Scientific and Industrial Research and the Geological survey of Denmark to conduct groundwater mapping and the other between the Indian Institute of Science and Danfoss Industries to set up a research centre on carbon-based cooling systems are part of the “Green Strategic Partnership” that India and Denmark forged after a virtual summit between PMs Modi and Frederiksen in September 2020.

Meanwhile, the commercial MoU between Reliance Industries Limited and Stiesdal Fuel Technologies will work on development of a “Hydrogen Electrolyser” for zero-carbon hydrogen to be manufactured in India. Stiesdal founder Henrik Stiesdal is also on Reliance’s nine-member “New Energy Council” announced in August this year, with plans to build four factories for the production of solar PV modules, electrolysers, fuel cells, and storage batteries in Gujarat.

“I am proud that Danish solutions play a key role when it comes to your very ambitious targets and I think you are an inspiration for the rest of the world. You have set some very ambitious targets when it comes to clean water for over one million households and for renewable energy including off-shore wind,” Ms. Frederiksen said after the meeting.

India has also been engaged with European partners to drop objections to an India-South Africa proposal at the World Trade Organisation in October 2020 that seeks to have all patents related to Covid- medicines and vaccines waived during the pandemic. When asked, MEA officials didn’t confirm whether Mr. Modi had raised the issue, but said Ms. Frederiksen had been “impressed” with India’s vaccination drive, and in particular the one-day record of 25 million vaccinations in September that she said was “five times the population of Denmark”.

“We know that COVID is a major concern for the global community so this issue of how both countries are tackling COVID came up for discussion….We remain engaged with our partners on the WTO [proposal], and it is taking its course,” said Reenat Sandhu, Secretary (West) at the MEA.

Ms. Frederiksen is the first Danish leader to be accorded a State visit since 2008, after which relations between the two countries soured over India’s demand that Denmark extradite its citizen Kim Davy, who was the accused in the massive arms dump case in Purulia of 1995.

To a question on the issue of Denmark’s refusal to deport Mr. Davy thus far, Ms. Sandhu said that “this matter was raised and we have an understanding that the legal process must go forward and both countries are working on it.”

The two leaders also discussed the situation in Afghanistan and shared common concerns on terrorism, rights of women and minorities and the need for an inclusive government, officials said.

Ms. Frederiksen also called on President Ramnath Kovind, who extended an invitation to the Queen of Denmark, Margrethe II to visit India next year, to coincide with the “Golden Jubilee of her reign and 75 years of India’s independence.”