Plus Keeps On Trucking With IVECO Autonomous Pilot Partnership 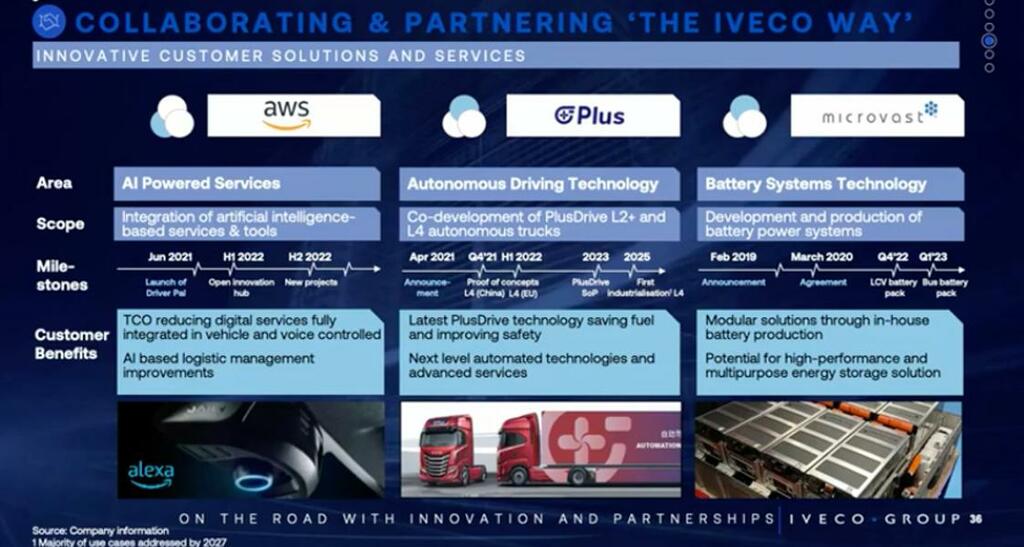 As a tech analyst, one of the particularly exciting topics I get to cover is the march towards fully autonomous vehicles. I’ve long projected that these next generation vehicles, ranging from semi-to-fully autonomous, will be one of the most impactful developments we see in our lifetimes. As with many nascent technologies, it’s looking like some of the earliest applications will be in the commercial sector. Trucking, specifically, stands to benefit from new levels of autonomy, promising gains in efficiency, safety, comfort and sustainability.

For several years now, I’ve been closely watching Plus (formerly known as Plus.ai), a pioneer in self-driving truck technology. In the past year, we’ve Plus partner with the likes of NVIDIA and Amazon and, most recently, publicly demo its Level 4 autonomous trucking technology. Last week my ears perked up at the news that Plus has partnered with IVECO, the commercial vehicle brand of CNH Industrial, to launch a pilot program in Europe and China. Let’s take a closer look at the deal and how it moves the ball forward for Plus and the autonomous driving industry.

While autonomous vehicles will undoubtedly change the world in ways we cannot yet anticipate, the journey towards that future is, by necessity, a cautious one. Safety is of the utmost importance, given the inherently high stakes of putting a computer behind the wheel of a hunk of metal hurdling down the highway with other motorists at 70+ miles per hour. These machines must be capable of absorbing tons of environmental data and processing it on the fly to make split-second, potentially life-saving decisions for vehicle occupants and other motorists. For this reason, pilot programs are essential to gather data, validate designs and build confidence in the technology before autonomous fleets are deployed. Automakers must be sure their vehicles will perform safely in a diverse array of conditions—inclement weather, varied terrain, and many other factors.

The pilot, announced last week, will begin validating and integrating Plus’s technology in the newest generation of IVECO’s S-WAY heavy-duty truck. Testing will take place both with Plus’s driver-in solution, PlusDrive, and its full-stack Level 4 autonomous platform, across Europe (beginning in Germany) and China. This, in itself, is notable, because other players in the space have opted to limit their testing and validation to one location, such as the Sun Belt. Testing in multiple countries should expose the trucks to a more diverse array of driving conditions and better prepare them for prime time.

Pending successful validation, IVECO’s initial production of S-WAY autonomous trucks with Plus’s Level 4 self-driving technology is slated for 2025. These vehicles promise to require little to any human involvement to do their jobs and their deployment will be a huge milestone for Plus, IVECO and the industry at large.

Autonomous driving announcements like this pilot program seem to be cropping up with more and more frequency. Beyond Plus, I’ve been watching other players like ON Semi, NVIDIA and Qualcomm unveil their own technology, partnerships and initiatives over the last few years, seeking to get a piece of the very pie that will be, perhaps sooner than later, a massive, profitable autonomous vehicle segment. One thing that is neat about this space is that, for once, in the insular traditional auto industry, there’s an opportunity for all of these newcomers to get in on the action. Traditional automakers are partnering with Plus and other tech companies because they simply do not have the technology themselves—they’re in the business of making cars, not computers.

Plus did not attend CES this year, choosing instead to focus on demos at various logistics and trucking shows (Manifest in Las Vegas in January, ACT Expo in May). It’s all very exciting, and I’ll be following Plus’s efforts with interest.

Note: Moor Insights & Strategy writers and editors may have contributed to this article.