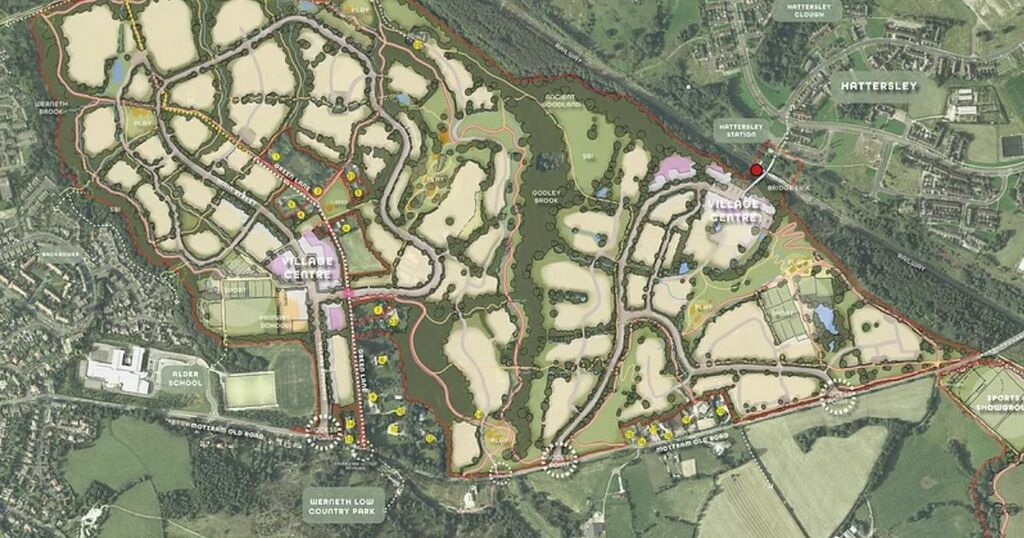 Plans for the controversial Godley Green garden village which would see more than 2,000 homes built in the countryside have been submitted.

Speaking at a meeting of Tameside’s full council on Wednesday night, council leader Brenda Warrington revealed the first step had been taken in turning the proposals from ‘ambition to reality’.

Coun Warrington said the proposed site would only cover 2.5pc of the borough’s green belt and half the site had been earmarked for ‘green infrastructure’.

If approved the huge development would generate £9m in income for the council, chiefs say.

However a petition against the garden village plans has been so far signed by more than 4,200 people.

A planning application has now been lodged with the council’s planning department for the site, which is open green belt land to the north of Mottram Old Road.

It had been proposed that 2,350 homes would be built under the Greater Manchester Spatial Framework, now the ‘Places for Everyone’ plan.

However the plans submitted are for 200 dwellings fewer, with 2,150 properties to be split across two villages, divided by Godley Brook.

Alongside the planning application, bosses are working to develop education capacity to serve the residents of the new homes.

“While more secondary school places would be required in the early stages of the development to mitigate the impact of Godley Green, additional primary school capacity will not be required until the work is near completion,” Coun Warrington said.

“To that end we are in talks with Alder High School about a significant expansion of their facilities and an entirely new one form primary school has been earmarked for construction within the development.”

It is also intended that there is a ten per cent gain in biodiversity across the whole site ‘if possible’, councillors were told.

Coun Warrington said they were committed to retaining and ‘enhancing’ Brookfold Wood and Werneth Brook, the sites that contain ancient woodland and sites of biological importance.

Across the whole site 75pc of mature trees would be retained and eight of the 11 ponds would be kept.

One bat box per ten houses and two barn owl boxes would also be provided.

Councillor Warrington said that more than 350 people took part in consultation events about the development proposals.

“Through these discussions we’ve developed a clear picture of the hopes, aspirations and yes, of course the concerns also of some of our residents,” she told members.

“Many asked why we had chosen not to develop brownfield land in Tameside first.”

Coun Warrington said that the council’s strategic housing assessment had found there was no site in the borough that could accommodate the project ‘on the scale of Godley Green’.

She added: “All of the brownfield sites in the borough combined would still be insufficient to meet our projected housing need that has been set by the government.”

Homes England has supported the project with a £10m grant, which would have a minimum of 15pc affordable housing provision.

The indicative proposals are for 1,250 dwellings in the west and 900 homes in the east of the site.

Coun Warrington said: “The Godley Green garden village will stand as an example for others in Greater Manchester, and across the country, for how to deliver the right homes in the right places, using the right methods.

“It will foster inclusive growth and expand opportunity, not just within the development itself but in Hyde, Hattersley and beyond.

“And as well as over 2,000 new homes, a proportion of which will be ring-fenced for affordable rent or purchase, the construction process itself will deliver £25m growth value added and 550 high quality jobs per year for the next decade and a half.

“Once completed the £9m windfall from additional council tax, business rates and new homes bonus will also provide a much needed funding boost to services across the borough.”

Even if the plans are approved by the council’s planning committee, they will then go to the Secretary of State who will make the final decision on whether to allow it to go ahead.

The application is being validated by the planning team before being made public on the council’s website, which could take several weeks.