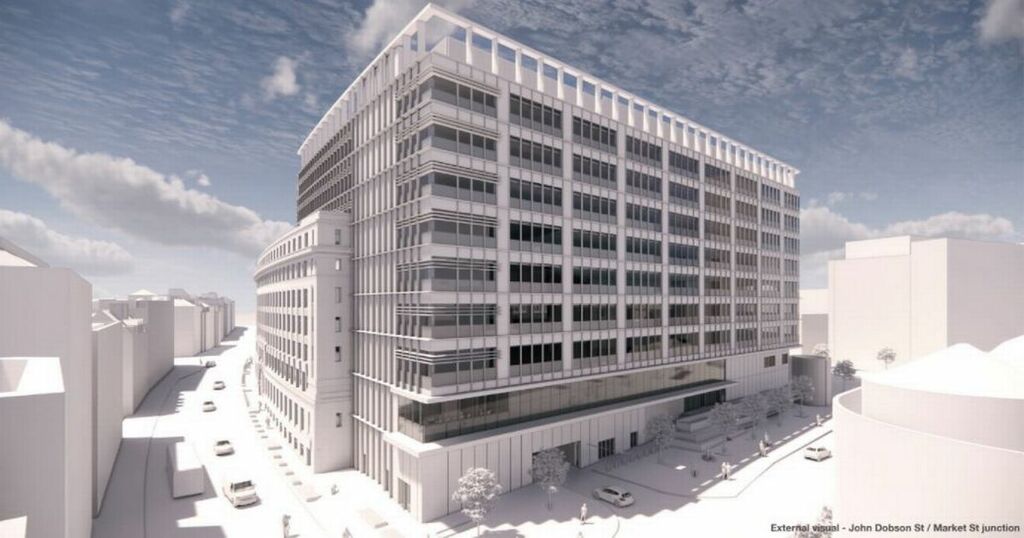 New plans to redevelop the former Odeon cinema site in Newcastle show it could become home to the city’s largest ever office scheme.

Two years ago developers unveiled plans to transform a large section of Newcastle’s Pilgrim Street, including the current Stack site, into a £200m luxury leisure, shopping and living scheme.

Since then, however, the pandemic and general changes in retail and leisure markets have seen demand drop, prompting the developers to draw up a new plan for a nine-storey office block that could provide room for more than 6,700 workers.

Retail is still included in the new scheme, albeit on a much smaller scale of around 10,000sqft,solely on the ground floor.

The scheme would also incorporate public realm improvements and 146 car parking spaces, including electrical vehicle charging points. Also planned it the retention and refurbishment of the southern side of Carliol House, which would now become part of the office scheme instead of initial plans to turn it into a 250-bed hotel.

The proposals build upon recent planning permissions for Bank House, Pilgrim Place and the former Fire Station, all of which are being progressed by Taras Properties.

Ahead of submitting a planning application for the proposals in October, a public exhibition is being held at Newcastle City Library showing how the proposals will look.

“The core principle of Pilgrim’s Quarter office development is to bring new workers into the city centre, priming footfall to the retail and leisure areas and the broader city centre offer.”

The changes come six months after Michelle Percy, Newcastle City Council ’s director of place, urged the developers not to “tear the heart” out of the struggling Eldon Square with its original plans.

She said that new shops forming part of the transformation of East Pilgrim Street were “not justifiable” after the city centre’s retail industry was devastated by the pandemic.

A number of new office developments have also been put in question by the pandemic, but it is known that HMRC is looking for offices for its 6,500 staff in the city centre after it announced plans to leave the Benton Park View site.

Ryder Architecture is working with Taras Properties on the new plans, which will include landscaping and a new public realm, plus the provision of a new cycle and pedestrian infrastructure.

At the centre of the site, an open courtyard will also be open to the building users.

A spokesman for the firm said: “On behalf of Taras Properties we are pleased to announce the commencement of public consultation for the Pilgrim’s Quarter scheme. We look forward to hearing the views of residents, businesses and stakeholders on what we believe will be a transformational development for the city centre.”

The consultation material is also available to download at www.pilgrimsquarternewcastle.com.