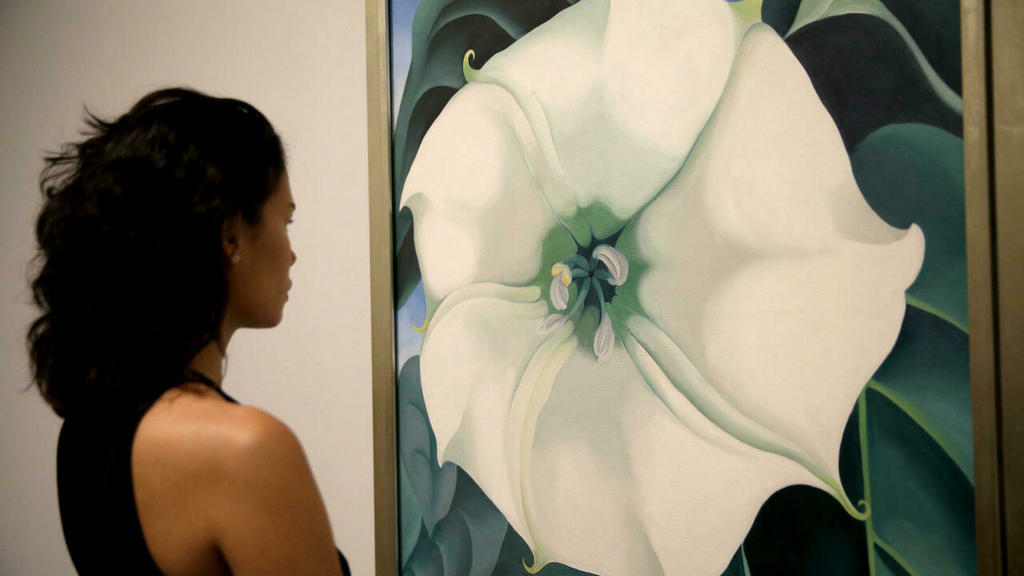 A large retrospective of the American painter Georgia O’Keeffe has opened at the Pompidou art museum in Paris. It’s a first for France and is widely considered an 'icebreaker' for other women artists.

O’Keeffe was "at the forefront of several modern art movements during her long and illustrious career," says Didier Ottinger, curator of the exhibition, which runs until 6th of December.

For the retrospective, the Pompidou Centre has borrowed one hundred of O’Keeffe’s paintings and drawings from large American institutions such as MoMa in New York, the Chicago Art Institute, and the Georgia O’Keeffe museum in Santa Fe, as well as other private collections.

An icon throughout much of the 20th century in the United States, Georgia O’Keeffe is less known in Europe.

Although the Grenoble museum put on a show called Georgia O’Keeffe and friends in 2015-2016, this is the first time a major exhibition has been organized around O' Keeffe in France.

Born in 1887 in rural Wisconsin, she was keen on becoming a painter from an early age. She studied at the Arts Students League in New York and later taught in schools and university.

She lived at a ranch in New Mexico from 1946 until her death at the age of nearly one hundred in 1986.

Photographer Alfred Stieglitz was the first to exhibit her drawings in the 291 Gallery he co-founded in New York. He also hosted the first American exhibitions by French artists Auguste Rodin, Henri Matisse, Francis Picabia and Paul Cézanne.

O’Keeffe was fascinated and inspired by the European modern art scene.

She and Stieglitz quickly hit it off and ended up getting married in 1924. They went on to became a legendary couple in the art world.

Her giant flowers caused quite a stir when they were first shown in the 1920s.

Critics interpreted them as "the expression of female desire, and sexuality, a metaphor for female orgasm," Ottinger told AFP, saying these Freudian interpretations greatly annoyed the artist.

"They are just projecting aspects of themselves onto my works," she retorted, in a film extract which is part of the exhibition.

When she died, the New York Times wrote: "She showed the American public that a woman could be equal to any man in their chosen field."

“She became even more well known than Norman Rockwell or Edward Hopper,” says Ottinger, referring to O’Keefe’s exuberant personality which meant she became a part of the "American mythology".

From the 1960s onwards, she became a pioneer of what is known as "hard edge" abstract painting, opening the way for many women artists to follow in her footsteps.

One of her paintings (seen in main picture) was sold for €37 million in 2014, a record for a female painter.

Even the Tate in London only organised its first major exhibition of her work in 2016.

"She is elusive to us," explains Ottinger. "We have long considered that American modern art began with Jackson Pollock’s paint drippings in 1947."

"There were hardly any modern art pieces from before 1945 in our collections, and they were not studied."

The Pompidou Centre only owns one O’Keeffe painting Red, Yellow and Black Streak, 1924, but through this retrospective (8 September-6 December), French museum-goers will now get the chance to do some serious catching up.