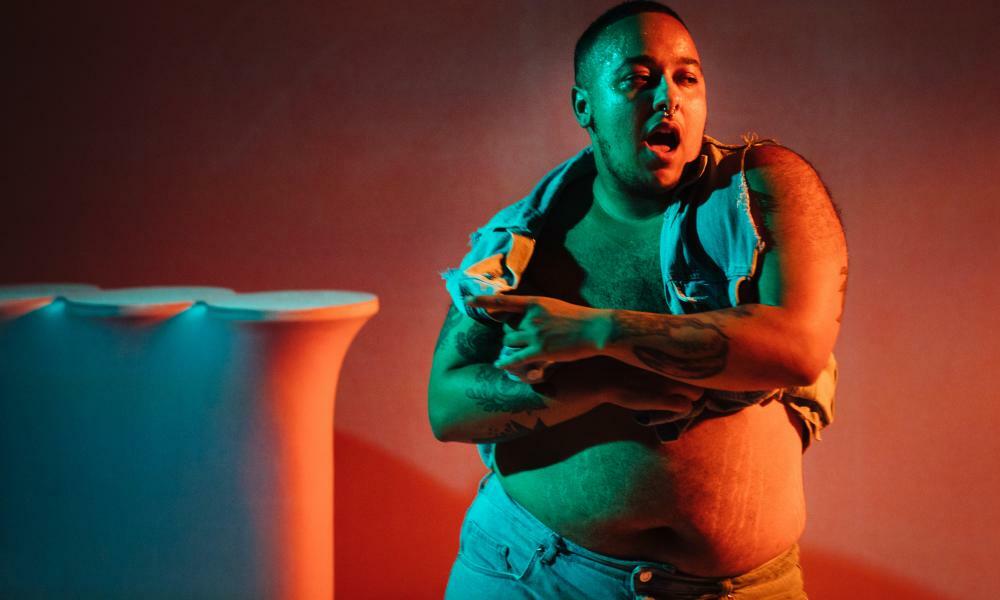 From the moment Mika Onyx Johnson bounces on to the stage, twerking his booty and dry-humping the set, you know you are going to have to park your prejudices right now. “Sometimes all you need is a good wank,” he chants. “Testosterone: that shit is wild.” What follows is an exuberant 60-minute induction to the pleasures and perils of the queer black body.

Johnson (pronouns: he/they) uses rap, storytelling, full-bodied dance and an endearing side-eyed humour to put cis people, white people and/or heterosexuals – that’ll be me, then – in our place. But the beauty of this loosely autobiographical show, an Edinburgh fringe hit from 2019, is that there’s nothing small or mean about it: Johnson pours heart, body and soul into a tale of hard-won transformation, staring his audience directly in the eye as he confides his innermost thoughts and feelings, then leaping up to seize a mic and rap out his frustrations. If some of the rhymes are a little basic, it all adds to the sense of an identity, and a show, that are still works in progress.

The storytelling rests on two relationships. One is with a white exhibitionist Johnson meets while working in a pub, who insists on making out in front of “all the Brians and Kevins”; she has a cupboard full of Jamie Oliver’s jerk rice and tiny nodding rastamen dotted about her house.

The other, more painful one, is with a woman who insists “I’m not like you. I’m not a lesbian”, even as Johnson is grinding away to give her the best orgasms of her life. It’s the climactic moment when everything comes together. Stripping down to his cutoffs, Johnson throws himself between the legs of a puffy pink stool, which suddenly becomes a lover’s thighs.

Once this has happens, you realise that every part of Rūta Irbīte’s luscious set represents a sexualised part of the bodies Johnson meets along the way. A cocktail table is a pair of breasts, which the actor fondles as he interrogates the temptation to become a stereotypical macho man. “Am I a man?” Johnson asks at one point. “Fucked if I know.”

Despite its rude physicality, there is a delicacy in this essay on the queer body in space, which is finely orchestrated by director Emily Aboud. Moments of disappointment or humiliation are pointed up by lemons plopping down from the ceiling or rolling across the stage – a mysterious motif which, again, emerges from abstraction to provide a punchline and a resolution: there is no pat ending for the “self-made body”, it suggests, but we can all enjoy a zingy cocktail of pink lemonade along the way.