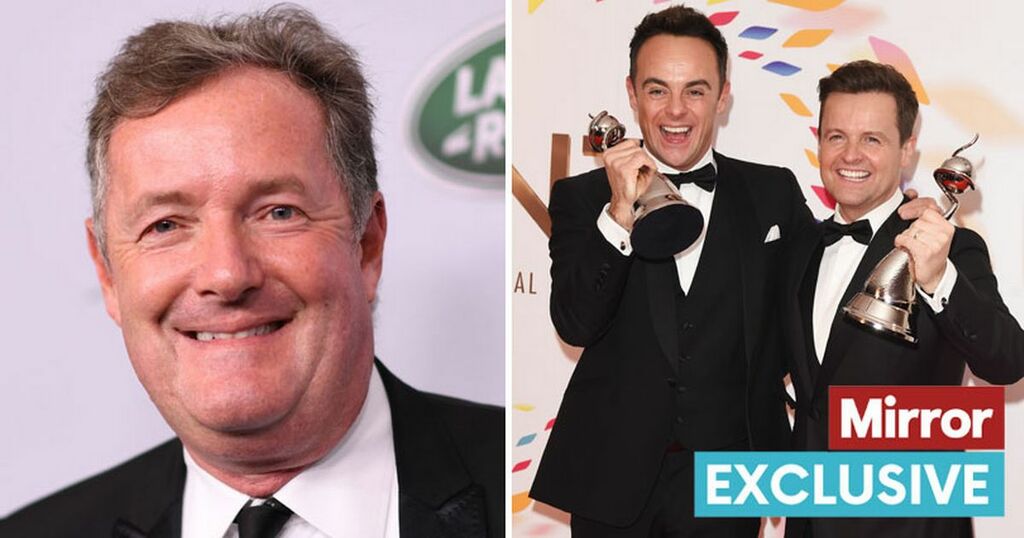 Piers Morgan is famed for giving public figures short shrift – now he wants to chop Britain’s most popular TV hosts down to size.

Ant and Dec are favourites to win the Best Presenter gong on Thursday's National Television Awards.

But their quest to win the award for the 20th consecutive year could face a significant hurdle – in the form of rival nominee Piers.

The former Good Morning Britain host told the Mirror he is determined to de-throne the “two little vain-glorious Geordies”, adding they have done “nothing special” in the past year.

Not just that, he is thrilled by the prospect of ITV bosses squirming in their seats if he wins the award after his controversial exit from GMB following his outburst about Meghan Markle.

Piers, 56, has now been cleared by Ofcom over the comments, and he has urged viewers to vote for him if they are outraged he was forced to leave the ITV show for expressing his opinion.

He said that Ant and Dec, both 45, would also be horrified if he bags the award – joking that the duo would need a medical team on standby.

Piers added: “I deserve to win because everyone’s sick and tired of Ant and Dec automatically winning this award, which bears no relation to reality.

“They’ve done nothing special in the last year, even they would admit that.

“I think it’s time the procession came to a shuddering halt and the Morgan bandwagon was rewarded with glory.

“We can’t have those two little vain-glorious Geordies standing there for the 20th consecutive year.

“Ant got one one year when he hadn’t even worked. It’s ridiculous.

“I’m taking a leaf out of his book, I haven’t really done much presenting in the last six months. So, therefore, by the Ant and Dec rule, I should get it.”

Piers said that should he triumph over the duo, who host ITV shows such as I’m a Celebrity..., it would be worth tuning in just to see their reaction.

“Imagine the miserable expressions on the faces of those two,” he said.

“And if they not only don’t win... [but] have to see me trotting up and raising the award, you may have to have a medical team on standby to race in and make sure they’re OK. We might need smelling salts for that one.”

He has also taken a pop at NTA bosses, saying it is unfair Ant and Dec are nominated as a duo in the Best Presenter category. Piers said: “If they had to do this individually, how would they get on? I think it’s actually cheating to do it as a pair.”

He is in a buoyant mood. Ofcom recently ruled that his criticism of Meghan Markle – he said on GMB in March he didn’t “believe a word” of what she said during her and Prince Harry ’s explosive interview with Oprah Winfrey – had not breached the broadcasting code. Piers, who was forced to quit the show after ITV chiefs failed to get him to apologise to the Duchess of Sussex, says victory tonight would “absolutely” be the icing on the cake.

He added: “It will obviously be awkward for the ITV bosses if I ended up being voted presenter of the year.

“I’ve already had the number one best selling book. If I was to then get TV presenter of the year as well in the aftermath of what happened, I think that would be ‘hashtag awks’, as they say in younger circles. Can you imagine how funny my speech is going to be if I beat Ant and Dec?

“I don’t know how long the show is, but there is a lot to get off my chest.”

Piers, married to Celia Walden, 45, was nominated for the award on the back of propelling GMB to its highest-ever ratings and making it one of the most talked about TV shows.

Sat alongside co-host Susanna Reid, 50, his evisceration of Cabinet ministers during the pandemic – in particular the then Health Secretary Matt Hancock – was TV gold as viewers shared in his outrage about the Government’s handling of the crisis.

He added: “People have good memories... they remember what Good Morning Britain did in the pandemic last year. I think we did some of the most outstanding broadcast journalism this country has seen for a long time as a team.

“I don’t think any broadcasters held the Government to account as ferociously or as well as we did.”

Piers, also vying for the NTA award alongside The Chase host Bradley Walsh, and This Morning stars Holly Willoughby and Alison Hammond, urged people to vote for him if they believe in free speech.

“I was removed from my job because I exercised my right to free speech and expression of opinion,” he said. “And it’s now been explained to the world that that was completely justified. I was entitled to do it.

“So if you share my sense of burning injustice then hit that vote button.”