Philippines: the challenges ahead for the new president Marcos

The prospects for the Philippines under newly elected president Ferdinand “Bongbong” Marcos have as much to do with a murky past as they do with modern challenges. Electing the son of a former dictator may make no sense to many on the outside, or to the many liberals inside the country who are now doing some deep reflection. But further cold hard truths lie ahead for the Philippines.

The crimes of members of the Marcos clan’s own very recent past still haven’t been fully accounted for. Ferdinand Marcos Snr fled the country following years of a dictatorship that plundered an estimated US$10 billion (£8 billion) of public funds.

There is also a question mark over the Marcos family’s unsettled estate tax liabilities. A 1997 decision of the supreme court had ordered the Marcoses to pay 23 billion pesos (£350 million) in estate tax. Asked about the issue in the run-up to the election, Marcos Jnr dismissed this issue as “fake news”. “Let’s leave it to the lawyers to discuss it.”

But this is only the latest unresolved case against the Marcos clan. The family matriarch Imelda, Marcos Jnr’s mother, still has more than a dozen cases pending against her after being found guilty of seven counts of graft in 2018. But nobody should seriously hope that these will come to any resolution or that Imelda will be held accountable for stealing obscene amounts of the country’s wealth under her husband’s reign, something the family vehemently denies.

The shamelessness of the Marcos clan towards this reported plunder in a country that wrestles with crippling levels of poverty has been well covered recently in the media. Imelda was pictured at home with a Picasso on the wall, despite it being one of many objects targeted for seizure by anti-corruption measures in 2014. An excellent investigative report by Reuters published a week before the election laid bare the brazen way Marcos Jnr could prevent any further recoveries from the family.

The Philippines’ bloated and archaic legal system desperately needs reform, but no president is incentivised to do so when they can govern using it. Without true separation of the government from the judiciary, presidents – especially those with landslide victories – can rule and flout the rules. Under Marcos Jnr there is little to suggest any reform is incoming.

Sadly, the cronyism extends well beyond the justice system and into an economy in desperate need of revival following crippling decline under former president Rodrigo Duterte. The Philippines regularly ranks as one of the worst countries in the world for “crony capitalism”, meaning it relies on a transactional relationship between government and powerful oligarchs who own and control much of the country’s economy. These are the same oligarchs that Duterte railed against and vowed to root out.

Marcos Jnr also inherits a series of problems. For one thing, the nation’s economy relies too heavily on its army of overseas workers around the world sending back their remittances to support those at home.

In 2018, it was estimated that these remittances constituted 11% of the country’s GDP. Nurses, sailors, domestic workers and construction labourers, estimated to be around 2.2 million worldwide, provide vital income to a nation falling behind others in the region.

Tourism has been massively hit as a result of the pandemic, and given the poor handling of COVID by the outgoing Duterte administration, there is much to do to improve the state of domestic healthcare before international tourism can be rebuilt.

If that all wasn’t enough, the country still lacks critical infrastructure to be able to respond to the massive natural disasters that regularly besiege the country. Volcanic eruptions, super typhoons, landslides, earthquakes – all devastating in their own right – have all left behind a need for temporary housing, spiralling the country further into a development trap it cannot climb out of.

Some research even suggests that the corruption endemic in the politics of the Philippines is built on the country’s geographical challenges and mishandling of the response.

Perhaps most troubling is the prospect for a continuation of a culture of violence normalised under Duterte. Marcos Jnr and his vice president – Duterte’s daughter Sara – are set to continue, if not build upon, the security state that enables attacks on journalists and leaves extrajudicial killings uninvestigated.

Unabashed militarisation under Duterte is seemingly Marcos Jnr and Sara Duterte’s principal policy issue. They plan to make military service mandatory for all adults and make the Reserve Officers’ Training Corps mandatory in college programmes, for which they face opposition from student groups.

While communist and Islamist insurgencies continue to threaten the country, further militarisation, building on Duterte’s war on drugs and use of the military in various arms of government, is risky.

These long-running insurgencies stem from deep social and political grievances – many legitimate – with the state. And increased violence at the hands of an expanded military is unlikely to deal with the root causes of the conflict. Duterte’s military demolished the city of Marawi in 2017 when it was drawn into a siege by local clans claiming to be Islamic State affiliates, and have not bothered to rebuild it – leaving thousands displaced and resentful.

Marcos Jnr has much to reform and rebuild. The electorate will support him for six to 12 months as they do all their new leaders. Capitalising on this wave of support with bold new measures to rebuild sorely needed robust infrastructure and trust in institutions will be needed for the next Marcos to take the throne in another 35 years.

Tom Smith does not work for, consult, own shares in or receive funding from any company or organisation that would benefit from this article, and has disclosed no relevant affiliations beyond their academic appointment. 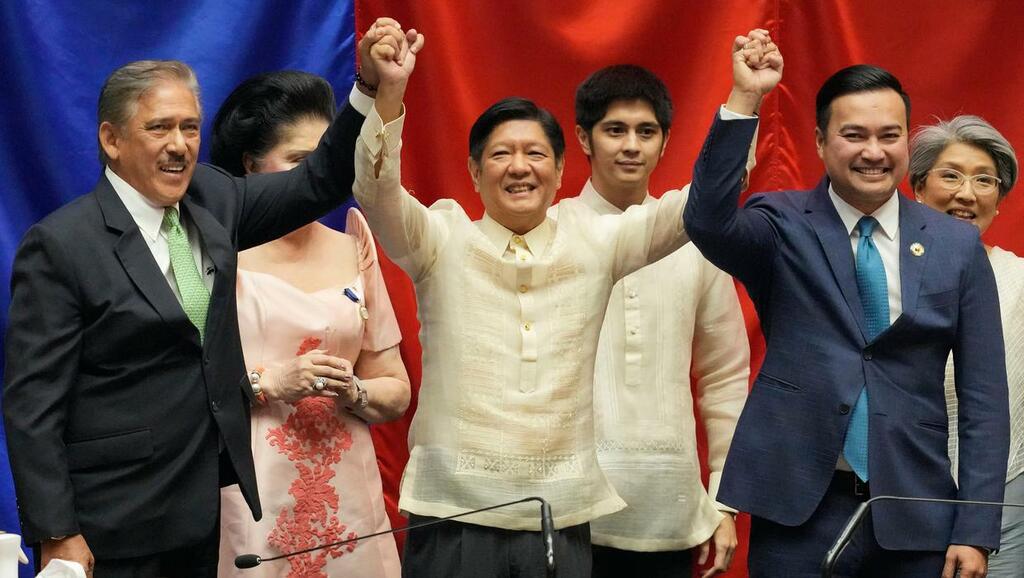 Dictator’s son will take office on 30 June, marking the dynasty’s return to the seat of power