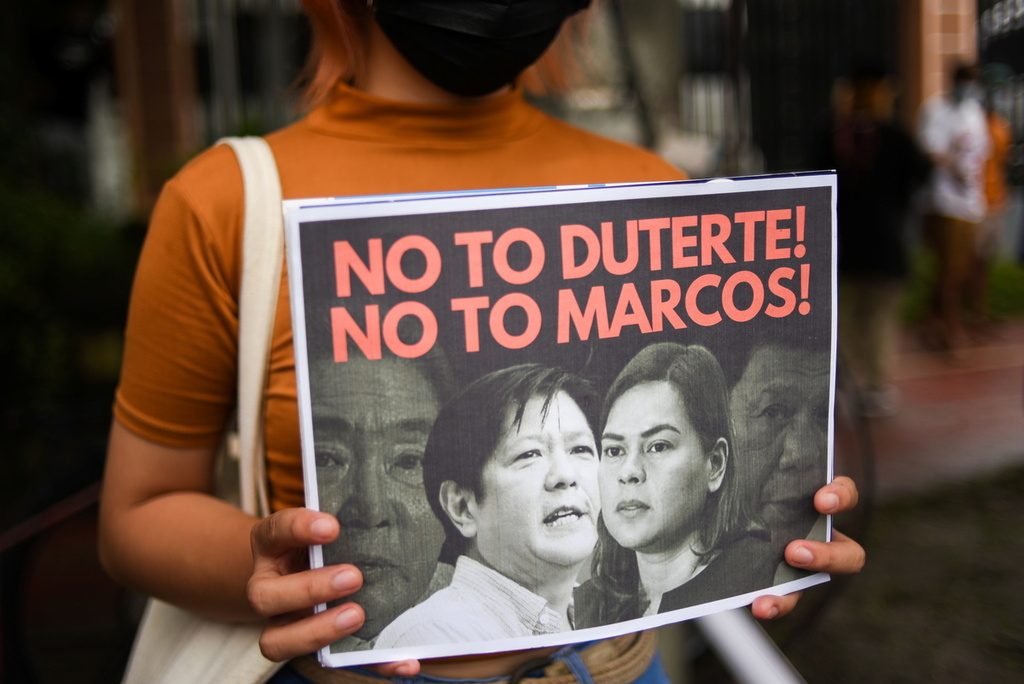 Philippines human rights groups staged protests on Wednesday to denounce an attempt by the son and namesake of late dictator Ferdinand Marcos to return his family to power by vying for the presidency.

Marcos, accompanied by wife and two sons, filed his candidacy for presidential elections in 2022, further shaking up an already polarised political landscape.

"The Marcoses remain scot-free from jail, they haven't returned all the money that they got from the nation's coffers, and now they are making a comeback for the highest position in the land, that is just plain, shameless gall," said Cristina Palabay of rights group Karapatan.

The Marcos family has long sought to rebuild its image and has repeatedly denied allegations that it plundered state wealth while in power, estimated in 1987 at $10 billion.

As the third contestant to sign up for the May 2022 presidential polls, Marcos, popularly known as "Bongbong" and more recently as "BBM", repeated he would be a "unifying" leader to help the Philippines tackle the pandemic and economic crises.

"Despite being at the centre of decades-long hate campaigns and protests, the family has always respected their right to voice their sentiments and will continue to do so," Marcos's chief of staff Victor Rodriguez said in a statement.

Marcos senior was chased from office in a people's power revolt in 1986 and died in exile in Hawaii three years later. The Marcos family returned to the Philippines in the 1990s and became powerful politicians representing their home province of Ilocos Norte.

Ahead of the younger Marcos's candidacy filing, protesters rallied outside the Commission on Human Rights building in Manila, some burning pictures of the late ruler, as they vowed to block his efforts to return the family to power.

Bongbong Marcos ran for vice president in 2016 but lost to lawyer Leni Robredo, who is also expected to contest the presidency next year.

Presidents are elected separately from the vice president in the Philippines.

Marcos did not name a running mate, but said his Partido Federal ng Pilipinas had wanted to adopt President Rodrigo Duterte as its vice presidential bet had he not decided to retire from politics when his single six-year term ends next year.

Opinion polls of possible presidential candidates have consistently shown Duterte's daughter, Sara Duterte-Carpio, in the lead despite her saying she would not join the race.

Some speculate Marcos and Duterte-Carpio could run on the same ticket.

The Marcoses and Dutertes have been closely allied, most notably when the president agreed to a request to bury the body of Marcos senior in a Heroes' Cemetery, defying strong opposition from anti-dictatorship groups.