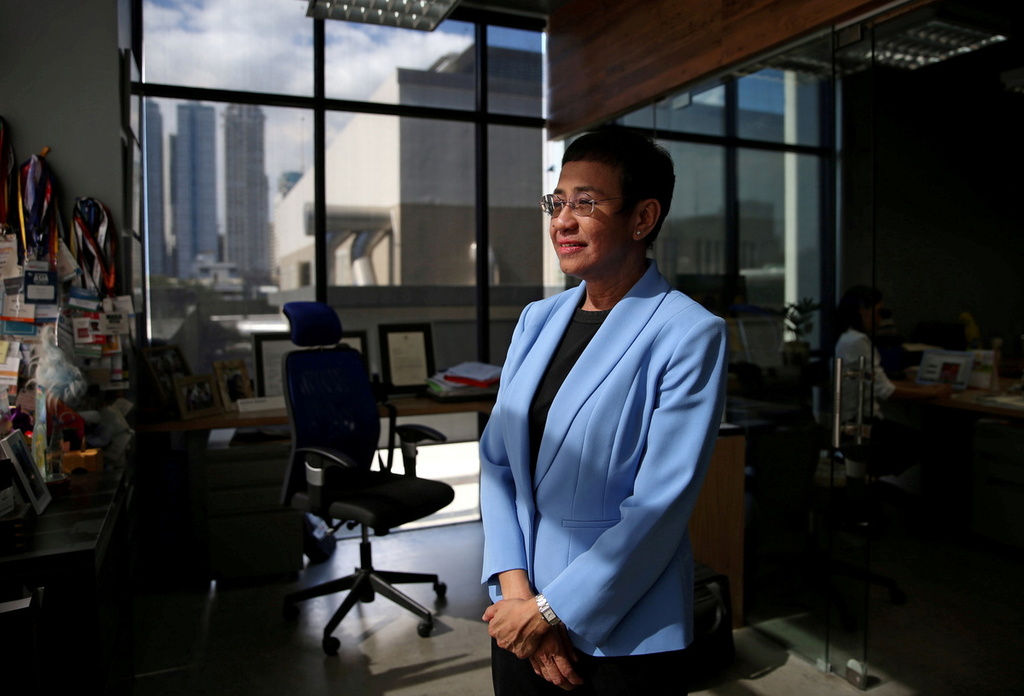 The Nobel Peace Prize for Philippine journalist Maria Ressa was hailed by many at home on Saturday as a rebuke on official attacks on the media, but there was no comment from President Rodrigo Duterte, a frequent critic of Ressa's news site.

Ressa who is free on bail as she appeals a six-year prison sentence last year for a libel conviction and has faced a slew of other court cases, shared the prize with Russian investigative journalist Dmitry Muratov

Duterte has described Rappler news site that Ressa co-founded as a "fake news outlet" and a tool of the U.S. Central Intelligence Agency.

Rappler, launched in 2012, has challenged Duterte's policies and the accuracy of his statements. Its investigations have included a spate of killings by law enforcement during a war on drugs Duterte launched when he took office in June 2016.

Lawmakers and media experts said the award highlights the importance of free speech and speaking truth to power ahead of next year's elections to choose Duterte's successor.

Carlos Isagani Zarate, an opposition lawmaker, said the government is in an awkward position.

"The deafening silence from the palace speaks volumes on how they treated Maria Ressa in the past and how they were taken aback by this recognition," Zarate told Reuters. "This is a personal rebuke on Duterte who was insulting critics, especially women."

Ressa is the first Filipino to individually win a Nobel - 13 Filipinos were in organisations that received the prizes in 2017, 2013 and 2007.

"For the palace, the dilemma is how to congratulate someone who is a victim of persecution by the government," Danilo Arao, a journalism professor at the University of the Philippines, told Reuters.

The presidential palace, Duterte's spokesperson, his chief legal counsel, and communications office did not respond to Reuters requests for comment on Ressa's award or on critics' reactions.

"As an ordinary Filipino, I am happy that a fellow Filipino has been included in this year’s roster of Nobel Peace laureates," Guevarra said in a statement.

He said freedom of expression is constitutionally guaranteed in the Philippines but there are legal limits, including libel and defamation.

"Prosecutorial discretion will always be guided by these legal principles and the facts obtaining in any given case, regardless of the persons involved," Guevarra said.

In 2018, Duterte banned Rappler from covering his official events, prompting the news site to cover event speeches and activities via live television and social media.

Several well-wishers said the Nobel highlights the importance of the media, truth and democracy ahead of Duterte ending his six-year term in June.

Ressa's prize highlights the importance of protecting freedom of the press "as our vanguard against abuse of power, and an essential element of democracy," the Management Association of the Philippines, one of the premiere business groups, said in a statement.